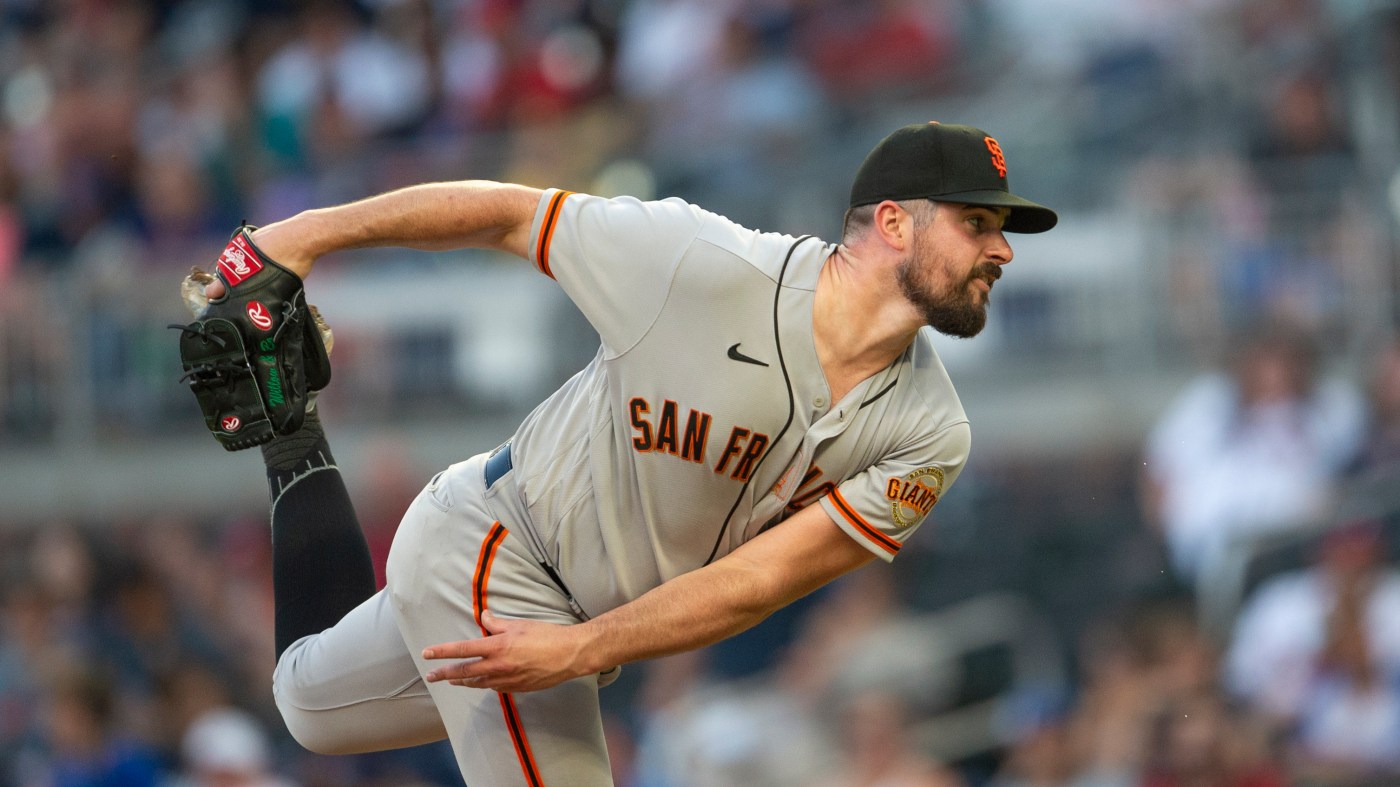 ATLANTA — Carlos Rodón deserved to win. His bullpen let him down. And the Giants lost on a walk-off for the second time in three games with the defending World Series champions.

When Rodón left this game — an eventual 4-3 defeat that dropped the Giants to .500 through the first six games of this trip — the Braves had managed just one run on three hits. He handed over a 2-1 lead to his bullpen that would grow to 3-1 by the time Jake McGee entered for the save opportunity in the ninth.

McGee surrendered a home run to Dansby Swanson to lead off the final frame — all Mike Yastrzemski could do was jump and watch as the ball carried over the center field wall — and Tyler Rogers gave up the game-winning hit to Adam Duvall, allowing William Contreras to race home, dropping the Giants to 38-30.

Marcell Ozuna’s tag up from first base on a fly out to center field also proved important, as he scored the tying run from second base on a single past third baseman Evan Longoria from catcher William Contreras.

The Giants held such a precarious lead in the first place because Atlanta starter Charlie Morton proved to be an equal foe to Rodón: he also struck out 10 and allowed only three hits over seven innings.

The Giants’ only runs off Morton came on a pair of solo home runs.

After an RBI double in the sixth inning of Tuesday’s win broke a 1-for-20 slump, Yastrzemski ripped Morton’s sixth pitch of the game Wednesday over the right field wall, giving the Giants a 1-0 lead. Darin Ruf delivered what until the ninth looked like it would be the knockout blow with a homer to left in the fourth.

In both losses this series, the Giants have gotten seven innings of one-run ball from their starters.

By now, Giants fans have probably learned some things about Rodón in almost half a season of starts from the club’s premier free-agent addition. Chief among them: when he’s locked in, like he was Wednesday night, few pitchers are more capable of making their opponents look silly.

And against the defending World Series champions, Rodón likely had Giants fans laughing all the way until his exit after the seventh inning. He was at only 91 pitches.

For the first time all night, the Braves mounted a scoring threat in the seventh inning. After doubling in their first — and, ultimately, only — run, Matt Olson represented the tying run on third base. Rodón reached back and fired his fastest pitch of the night — by a full mph — at 98.6 past Adam Duvall for his 10th strikeout, stranding Olson 90 feet away.

That’s another fun fact about the pitcher who is quickly becoming San Francisco’s second ace: he feeds off the moment.

So that bodes well for a potential playoff series between these two clubs, which after the first three games of this series looks seriously enticing. Two games have been decided by one run and the other by only two.

Rodón’s dominance against a stacked lineup like Atlanta’s is not be overlooked. The other night, after Logan Webb tossed seven innings of one-run ball in a tough-luck loss, he called the Braves’ order the best in the game — besides the Dodgers, of course. Among his strikeout victims Wednesday: Ronald Acuña Jr. (134 wRC+), Dansby Swanson (twice; 130 wRC+), and Orlando Arcia (151 wRC+).

He didn’t allow a hit until Arcia’s single with one out in the fifth.

Olson’s RBI single in the seventh was the first run Rodón had allowed in 21 innings, dating back to the final frame of his start June 7 against Colorado. Over that stretch, he has lowered his ERA from 3.51 to 2.70 after Wednesday night, the eighth-lowest mark in the National League.

His 10 strikeouts were his most since he struck out 12 Rockies on May 9 and gave him his third game this season with double-digit punchouts. In the NL, only Milwaukee’s Corbin Burnes (110) has more strikeouts than Rodón (101).

Now 3-3 through the first six games of this trip — all decided by two or fewer runs — the Giants will try to salvage a split with the defending champs with Alex Wood making what amounts to be a homecoming start. The Braves drafted him out of the University of Georgia, and he calls Atlanta home in the offseason.

Nobody better to pitch in what is forecasted to be a fourth straight game with first-pitch temperatures approaching triple-digits but the only one that will feature all nine innings under the beating southern sun.