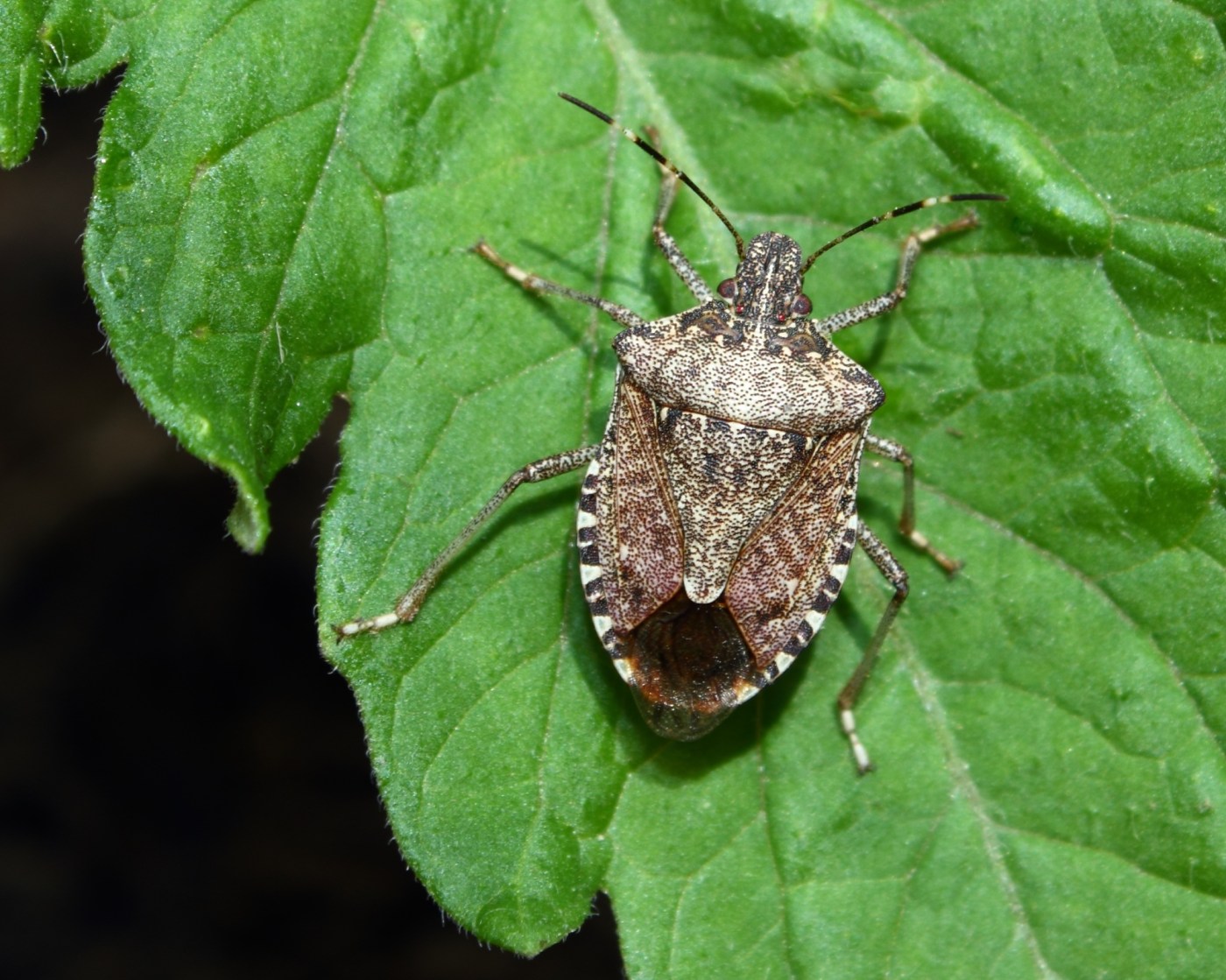 I was recently asked to identify a bug that I had not personally seen before. This led me down an internet rabbit hole where I learned all I wanted to know about the brown marmorated stink bug (BMSB). Now I feel like I should share my newfound knowledge with my readers.

The brown marmorated stink bug (Halyomorpha halys) is an invasive species that originated in East Asia. It hasn’t gotten as much attention as some other invasives (such as the Asian Citrus Psyllid), but it has been seen with increasing frequency in California. It was first reported in Allentown, Pennsylvania in 2001 and is now present in over 40 states.

About the size of a dime, it is larger than most pest insects. It has a distinctive shield-shaped body with mottled brown wings. Its underside is white, and its legs and antennae are dark brown with white banding. As the name implies, it releases a malodorous liquid when disturbed.

The stink bug can be a significant agricultural pest and causes damage to fruit, ornamentals, and other crops. It especially likes to feed on apples, peaches, cherries, and raspberries, leaving scars and unpleasant hard spots on the flesh. Ornamentals such as Chinese pistache, Princess Paulownia, catalpa, and Tree of Heaven are also favorite targets.

Perhaps the worst characteristic of these insects is their tendency to move indoors in the fall. While researching for this column, I came across several horror stories of people suddenly finding thousands of stink bugs inside their homes. One couple accidentally left their back door open for a few hours and ended up with their bedroom walls completely covered in bugs. Although this is more likely to occur in the east, there are some areas in Southern California that are subject to cold winters and could experience stink bug invasions.

What should you do if you see stink bugs in your garden? Insecticides are not very effective, so your focus should be on prevention and protection. Row covers and pheromone traps are effective and environmentally friendly.

If the idea of your walls covered with stink bugs bothers you as much as it bothers me, there are some preventative measures you can take. Obviously, don’t leave your unscreened windows or doors open for any extended period of time. Use silicone caulk to seal any cracks or possible points of entry around window frames. Install door sweeps. These bugs are pretty big, so excluding them is somewhat easier than excluding ants or mosquitoes. They are attracted to light, so take extra care to ensure that doors and windows near exterior light fixtures are properly caulked.

If you experience a stink bug invasion, avoid using brute force (smushing) – for obvious reasons. Vacuuming with a shop vac (that you can keep in the garage) is one possible solution. Keep in mind that the vacuum will smell bad for a while, so don’t use that expensive Miele! Another, less violent solution is to place an aluminum pan containing soapy water under a light. When the bugs come near the light, they will (theoretically) fall into the soapy water and drown.