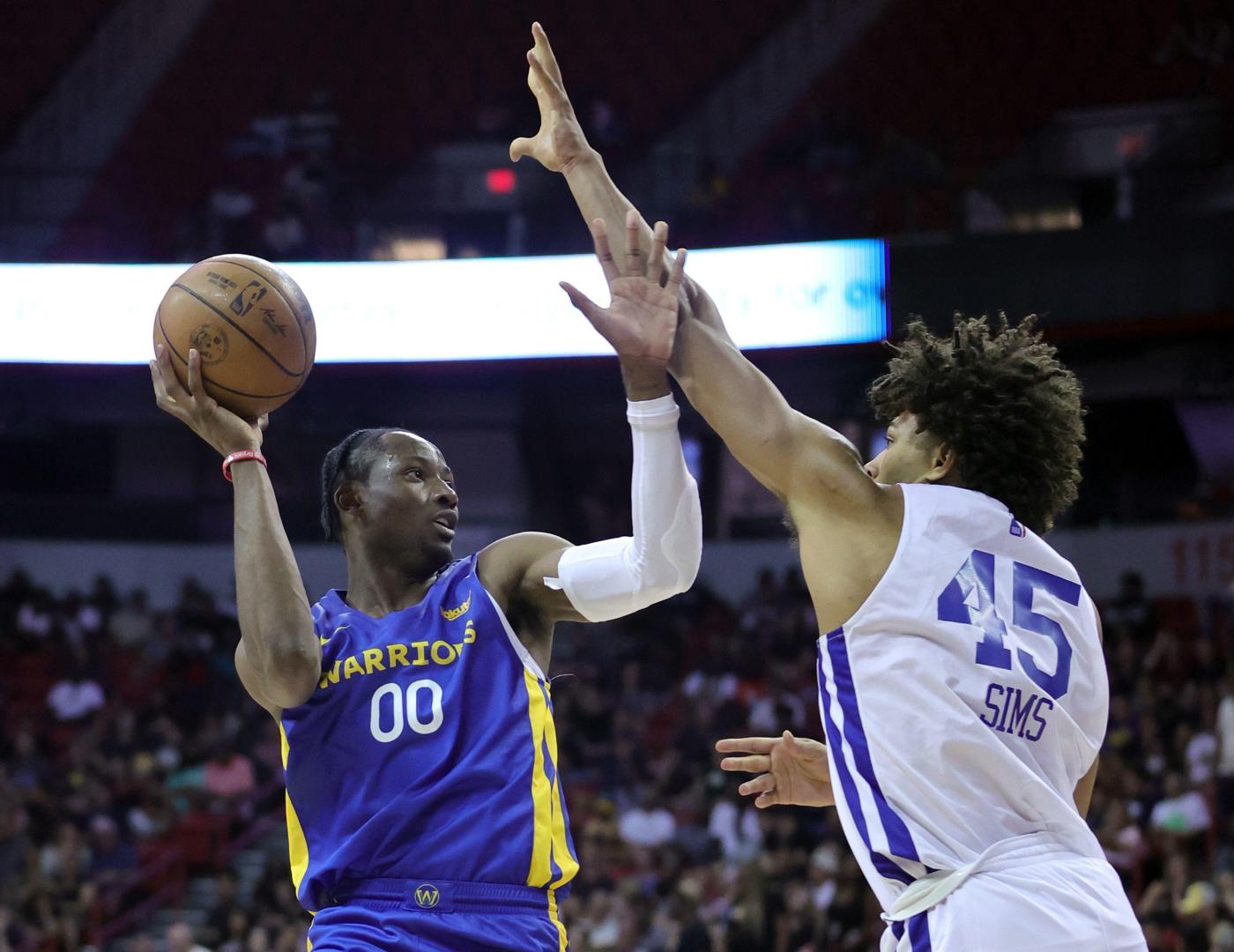 LAS VEGAS — Armed with his new contract and an even more chiseled physique, Jericho Sims was the most impressive Knick in their Summer League opener Friday night.

Reminders of his athleticism were sprinkled throughout New York’s 101-88 victory over the Warriors, most especially when he soared above the rim for alley-oops.

His sixth dunk of the evening, an alley-oop from Quentin Grimes, was Sims’ final highlight, and, believe it or not, something of a throwback.

As Grimes revealed in one of those fun anecdotes often reserved for Summer League, Sims was his host during an official visit to the University of Texas five years ago. We can’t imagine Sims was especially verbose on the campus life and culture in Austin (‘he’s an introvert,’ as Derrick Rose once explained), but the center spoke loudly in the gym with Grimes.

“It’s kind of nothing new,” Grimes said after he and Sims combined for 40 points against the Warriors. “When I went on my visit to Texas, I threw a couple lobs to him in the open gym. So it’s kind of coming full circle playing with the Knicks. “

Still, Sims was largely ignored as an NBA prospect because he’s undersized for a center (about 6-foot-9) and hasn’t demonstrated versatility offensively outside of his array of dunks. He fell to the 58th overall pick, or just third-to-last, and impressed enough to not only crack the rotation but have his two-way contract converted to a three-year, $6 million deal.

The agreement was reached while the team practiced in Vegas, which allowed Sims to celebrate just outside his door.

“He went and did some shopping at the hotel,” Grimes said. “He spent a couple bags during the time off after practice so he definitely got his money worth.”

So what’s in store for Sims this season? It’s difficult to predict injuries and rotation changes, but he’s secured a spot on the roster and will likely play behind Mitchell Robinson and Isaiah Hartenstein. Of the three, Sims is the most athletic with a 44.5-inch vertical.

Despite his quiet persona, there’s also a competitive streak in Sims. We saw it Friday night when he was put on skates by guard Mac McClung for a layup in the third quarter. Sims quickly followed with an uptick in energy and consecutive alley-oop dunks. That drive is important for big men, in particular, because often they’re thrown into the sport because of their size and lack the passion to get better.

“Yeah, he’s special. That lob I threw to him – I thought I threw it early but I threw it right on time,” Grimes said. “He’s a freak athlete. Congratulations to him on his new contract and everything. I’m just super excited for him. Best to come for him, for sure.”

PENNY FOR YOUR THOUGHTS

It’s an area of expertise for Hardaway, a former All-Star point guard whose stint with the Knicks is not worth describing.

For Grimes, the connection to Hardaway was made through his agent, David Bauman of Independent Sports & Entertainment, and

“He’s kind of like a big uncle to me,” Grimes said. “Just took me under his wing and helped me play the point guard position a lot better. Because that’s what I was in high school.”

With Jalen Brunson, Derrick Rose and Immanuel Quickley in the fold – along with Julius Randle and RJ Barrett requiring time with the ball – it’s unlikely Grimes will get extended time as a playmaker.

But it’s certainly relevant to Summer League, where Grimes is the top dog on the Knicks and scored a team-high 24 points with eight assists on Friday.

“Just initiating the offense. Playmaking and pick-and-roll. That’s what (Tom Thibodeau) wanted, that’s kind of my goal after last year,” Grimes said. “Come in, work on that, and hopefully come in this year and have a bigger role offensively while sticking to my roots as a defensive player and a shooter.”

DEBUT TO REMEMBER AND FORGET

Trevor Keels’ debut was memorable for its symbolism, but the stat line wasn’t something for the scrap book.

The 42nd pick missed seven of his eight shots in 25 minutes while scoring three points. The highlight was four steals, and, of course, the feeling of accomplishing a goal.

“Just had chills, especially in the walkway before the game, seeing the crowd, seeing the NBA logo,” Keels said. “It’s a lot of emotions. I’m proud of myself, proud of the guys that helped me get here, supported me. I made it. I remember watching Summer League on TV all the time, begging my dad to come to Vegas to come to a game and now I’m playing.”

Keels, 18, is expected to sign a two-way contract and should get time in G League. He’s the only Knicks draft pick this year. The step up in strength and physicality might be difficult at first for Keels, who might benefit from a training camp of conditioning and the weight room.

“I didn’t think I was going to (get drafted) that low. But it is what it is. …Of course I’m going to make sure all the teams pay that passed up on me,” Keels said. “But I’m excited I’m a Knick. I wouldn’t change it for anything. I wouldn’t go back and change it.”

Julius Randle and James Dolan were among the Knicks contingent to show up in Vegas for the team’s opener.

Besties Obi Toppin and Immanuel Quickley were also on hand, along with the front office.

Dolan, a 67-year-old bachelor who was accompanied by a few young women, is building his sphere-shaped entertainment arena about two miles from the Summer League courts.

Leon Rose, William Wesley and Tom Thibodeau were seated in the same row. Rose and Wesley made sure to greet LeBron James when he showed up courtside for the Lakers game. Rose, a former agent, represented James before ‘The Decision.’

Neither Thibodeau nor any member of the Knicks front office has spoken publicly since the season ended three months ago.