Some notable 49ers’ performances in preseason win over Vikings 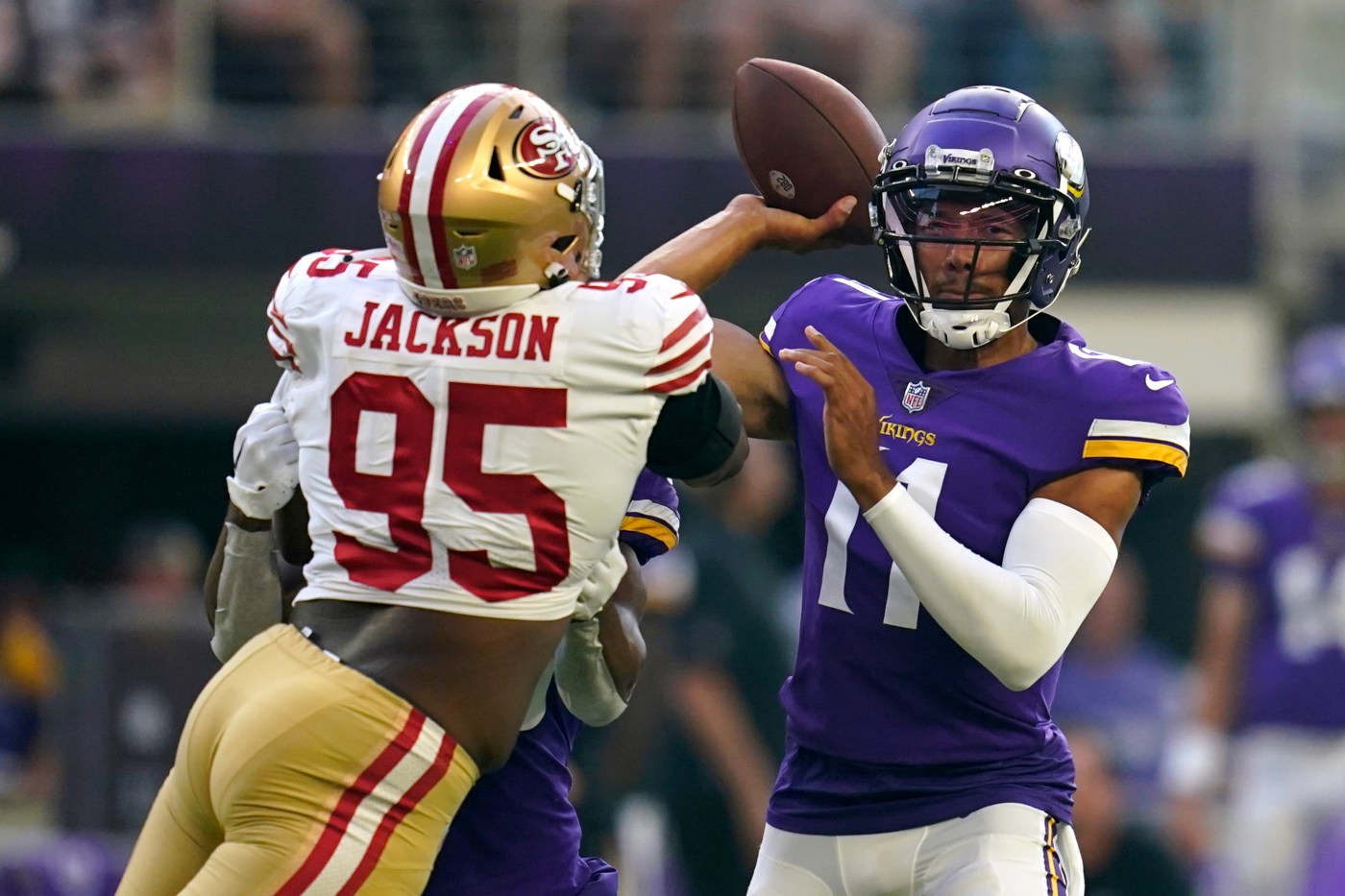 When Kyle Shanahan said he considered two joint practice sessions with the Minnesota Vikings more important than the actual preseason game to follow, he wasn’t kidding.

With 19 of 22 projected starters sitting it out, a look at how notable players on the 49ers fared on the road Saturday night in a 17-7 win over the Vikings at U.S. Bank Stadium:

QB Nate Sudfeld: Conducted a 14-play, 79-yard drive culminating in a 2-yard touchdown to JaMycal Hasty with a two-point conversion to Danny Gray that was Garoppolo-like in its execution of safe passes and moving the chains. Sudfeld was 13 of 17 yards and the touchdown. Brock Purdy, the rookie seventh-round pick, was 14 of 23 for 123 yards.

DT Javon Kinlaw: A first-round pick from 2020 whose second NFL season was riddled by injuries, Kinlaw knifed inside Vikings rookie guard Ed Ingram and dropped Kellen Mond for an 11-yard sack in the first quarter. He was greeted enthusiastically on the sidelines by Nick Bosa. Worth noting that on Ty Chandler’s 3-yard power touchdown run in the first half, Kinlaw was not on the field.

LG Aaron Banks, RG Spencer Burford: Projected as the 49ers starting guards, both played the first half. The 49ers struggled to make headway on the ground. Only the coaches know for sure based on film, but it appears Burford, the rookie fourth-round pick, may have had a better game than Banks, last year’s second-round pick from Notre Dame. Jason Poe replaced Banks, Dohnovan West took over for Burford.

DE Drake Jackson: The second-round draft pick (which was the 49ers’ first pick in 2022) closed nicely on opening drive to drop Alexander Mattison after a 2-yard gain on Minnesota’s opening drive. Also applied pressure on the Odum interception of Mond. Recovered from stinger sustained in last week’s game against Green Bay.

CB Deommodore Lenoir: With fellow second-year corner Ambry Thomas sitting it out with a sore knee, Lenoir made some physical plays as a tackler and also got work in the slot as the 49ers did some blitzing from that position with at least three different players. Broke up a sideline route to Bisi Johnson in one-on-one coverage. Too soft in giving up 17-yard completion to Tristan Jackson.

CB Samuel Womack III: Applied pressure on a corner blitz and recovered a fumbled punt in the first half. Fifth-round pick continues to be one of the surprises of 49ers training camp/preseason.

RB Ty Davis-Price: A 2022 third-round pick from LSU, Davis-Price tried to bounce a third-and-1 run outside instead of taking an inside crease on the opening possession and was stuffed by defensive lineman Arman Watts. Had runs of 12 and 14 yards, running over defensive back Myles Dorn on the latter. Davis-Price finished with 41 yards on 10 carries.

RB Trey Sermon: Last season’s third-round draft pick struggled to be decisive and find room and also dropped a hot-read from Purdy late in the first quarter. Had five carries for eight yards and could find himself way behind in the pecking order for the second straight season. It doesn’t help that Jordan Mason, an undrafted rookie out of Georgia Tech, ran aggressively and had nine carries for 57 yards.