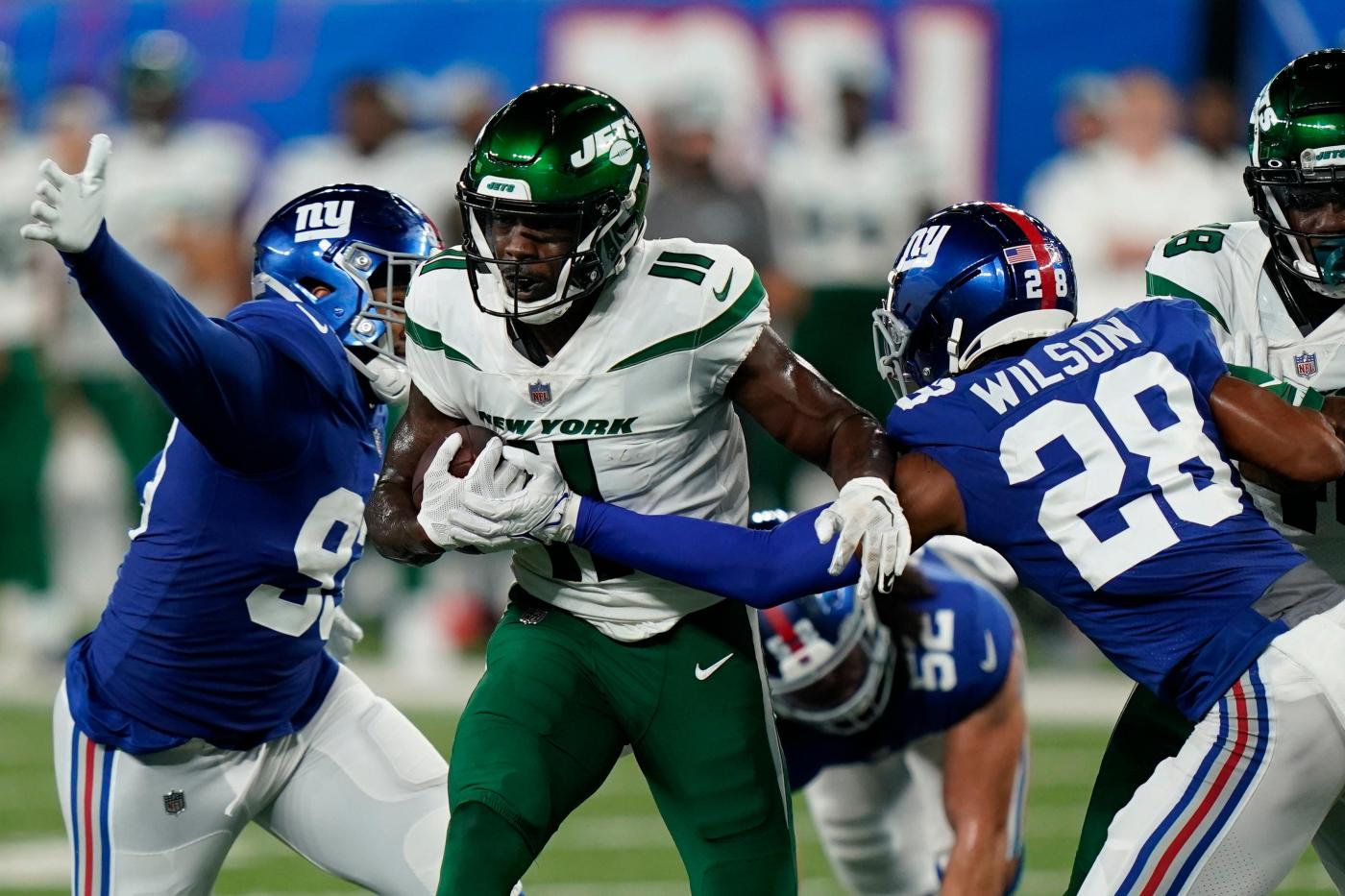 A day after Jets wide receiver Denzel Mims’ public trade request via his agent Ron Slavin, it was business as usual at Florham Park.

Mims practiced with the rest of his teammates Friday morning as he worked on special teams drills and with third-string quarterback Chris Streveler.

Jets coach Robert Saleh said he had a good conversation with Mims before practice as he isn’t giving up the prospects of the team keeping Mims.

“I’m not going to say it is over, but you go into this and fight for all of your guys and you try to get them where there want to be,” Saleh said about Mims. “All the individual players, you want them to have success and careers and achieve all of their personal goals.

“I do think Denzel has had a good OTAs and has done a good job in training camp. It is just about finding his niche and finding his role. He’s frustrated with his role and he’s not where he wants to be, but that doesn’t mean that he can’t get there. He just has to continue to grind.”

According to a source, the Jets are expected to grant Mims’ trade request. However, the team doesn’t plan to give him away before Tuesday’s roster deadline at 4 p.m.

The Jets will need to be down to 53 players Tuesday and Mims is currently buried on the team’s depth chart. Not only do the Jets have Elijah Moore, Corey Davis, Braxton Berrios and Garrett Wilson ahead of him, but Jeff Smith and Calvin Jackson also look poised to make the roster. Unless the Jets carried seven receivers this season, Mims appears to be the odd man odd.

The Carolina Panthers have called the Jets about Mims, according to The Athletic. This makes sense because Mims played for current Panthers coach Matt Rhule when the two were at Baylor together. In three seasons (2017-19) with Rhule as his coach, Mims recorded 182 catches for 2,901 yards and 28 touchdowns.

Mims has struggled with the Jets on and off the field as he has just 31 receptions for 490 yards and zero touchdowns in 20 games played. He has also dealt with an illness and a hamstring injury during his time with the Jets.

Saleh said he didn’t think keeping Mims on the team would cause a distraction.

“But at the same time, from a business standpoint, we have to do what’s best for the organization and he’s one of our better players and we gotta find a way to make this work.”

It isn’t every day that a player says he wanted to play for the Jets or he was going to hang up his cleats. But that’s precisely what Lamarcus Joyner was going to do during the offseason.

In March, the Jets re-signed Joyner after the veteran safety played one game for the team in 2021. In the season opener against Carolina Panthers, Joyner tore his triceps tendon and missed the rest of the year.

“It was either the Jets, or I was going to retire,” Joyner said. “I love this organization that much.

“I was pleased to be with Coach Saleh. I love his mentality, I love his standards and I love his defensive scheme. It was a lot of personal stuff, the Jets were very supportive of my wife and my family. So that gave me that extra push.”

Joyner returned to practice this week as he was dealing with an illness. The Jets are hoping Joyner, along with free agent additions Jordan Whitehead, cornerback D.J. Reed and first-round draft pick Sauce Gardner will improve their secondary from a year ago when the team finished 30th in pass defense (259.3 passing yards per game).

Joyner says he loves the mix of veterans and young players on the Jets defense.

“You need that,” Joyner said. “You need some balance and some stability in your locker room. Having the core and a bunch of young guys along with some veterans that has some ability to lead those guys and show them the way.”

A day after he suffered an injury during the joint practice with the Giants, defensive end Jermaine Johnson was back at practice with the rest of the team. However, Reed, who was also being worked on by trainers Thursday, did not practice.

Reed is dealing with soreness in his knee. The status of Reed for Sunday’s game is unknown, but Saleh doesn’t consider the injury significant.