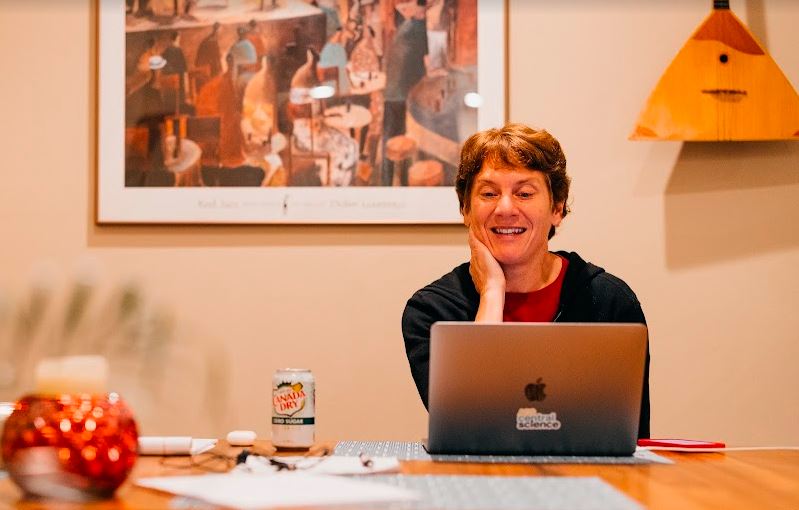 On Wednesday morning, Stanford University scientist Carolyn Bertozzi won the 2022 Nobel Prize in Chemistry for harnessing this technique to create an entirely new field of research, inspiring new medicines, materials for energy storage, and other applications.

Bertozzi shares the $1 million prize with K. Barry Sharpless of Scripps Research in La Jolla, who earned his Ph.D. in chemistry from Stanford, as well as Danish scientist Morten Meldal at the University of Copenhagen.

The trio’s findings have “taken chemistry into the era of functionalism,” the Royal Swedish Academy of Sciences said in its announcement.

Jolted awake at her Palo Alto home by a 1:43 a.m. phone call from a Nobel committee representative, “you have to pinch yourself a few times to make sure it’s not just a hallucination in the middle of the night,” she said at a Wednesday morning press briefing.  The award came one week before her 56th birthday.

Much her memory of the phone call is a blur, she said. But a final piece of advice was startling: “You have just under one hour before the announcement goes live,’ ” they told her. “So enjoy the last hour of your previous life, because then it will start your new life.”

Her first call was to her 91-year-old father, William Bertozzi, a retired physics professor from the Massachusetts Institute of Technology who inspired her love of science. A night owl, he was up watching TV.

“When a child calls you at 2 a.m., usually it’s bad news,” she joked. “I said ‘Dad, I just had a phone call and you won’t believe what it was.’ And he paused for a moment — and then he guessed it.”

The field of “click chemistry” was developed by Sharpless, a second-time Nobel winner, and Meldal. Their insights ignited the study of chemical biology, which explores how reactions inside a cell are linked together.

Bertozzi elevated the field by finding “click reactions” that didn’t interfere or interact with natural biochemical processes. She dubbed the novel process “bioorthogonal chemistry,” opening the door to study chemistry as it happens in a living cell — a profoundly complicated place.

“We developed pairs of chemical groups, and those pairs are perfectly suited for each other,” she explained. “When they encounter each other, they want to react and form a bond. And they love each other so much, that you can surround those chemical groups with thousands of other chemicals,” such as the messy inner workings of the human body, “and they ignore that, and find each other.”

Such bonds make it possible, for instance, to attach light-emitting compounds to biological molecules within a cell – without reactions that would muck up a cell’s biochemistry. Then chemists can peer into a cell’s inner mechanics.

“Carolyn invented a new way of studying biomedical molecular processes, one that has really helped scientists around the world gain deeper understanding of chemical reactions and living systems,” said Stanford president and neuroscientist Marc Tessier-Lavigne. “The real world impact of her work has been profound and far reaching.”

She is the 21st living Nobel Laureate among Stanford’s community of scholars. Since the university’s founding, it has been home to 36 Nobel Prize winners.

Bertozzi has already made a name for herself within the biotech industry, co-founding at least seven companies, such as Redwood Bioscience of Emeryville, Enable Biosciences of South San Francisco and others.

As a freshman pre-med student at Harvard, Bertozzi didn’t enjoy general chemistry. So she was braced for sophomore year’s organic chemistry course, which is notoriously tough. “I went into that class fully expecting to just grind it out and suffer like everyone else,” she said.

But she was awed by the shapes and behaviors of three-dimensional molecules. “It was an amazing course,” she recalled, “and so by the time I graduated from college, I knew that that’s what I wanted to do.”

To relax, she played keyboards and sang backing vocals in a heavy-metal rock band called Bored of Education, whose lead guitarist went on to create the band Rage Against the Machine.

A Boston native, Bertozzi had never traveled west until her tour of graduate chemistry schools at Caltech, Stanford, and UC Berkeley.  Her introduction to the Bay Area was life-changing: Seated on the back of a motorcycle, she was taken on an exhilarating trip over the Bay Bridge to hear music in San Francisco, and vowed to stay.

She selected UC Berkeley for her Ph.D. work, arriving just as the university’s chemistry department was launching the field that is now called chemical biology.

After post-doctoral work at a UC-San Francisco immunology lab, she became a faculty scientist at Lawrence Berkeley National Laboratory, a UC Berkeley professor and director of the Molecular Foundry, a Department of Energy nanoscience user facility located at Berkeley Lab. She founded the Foundry’s Biological Nanostructures Facility, where scientists study the synthesis, analysis and mimicry of biological nanostructures.

“The chemistry she developed allowed the engineering of living-nonliving interfaces, a frontier of nanoscience which has become a major theme of the Foundry,” said Jeff Neaton, associate laboratory director of Berkeley Lab’s Energy Sciences Area.

It was at Berkeley where she developed the pioneering field of “bioorthogonal chemistry,” building on the work of Meldal and Sharpless. Previously, “there was really no way to study certain biological processes,” Bertozzi said. “They were just invisible to the scientist.”

Stanford came calling in 2015. The university was making a big investment in chemical biology with the construction of a new institute ChEM-H (Chemistry, Engineering and Medicine for Human Health), devoted to linking chemistry, engineering, and medicine to better understand human health and treat disease. Bertozzi saw a chance to contribute from the ground up.

Stanford had another big draw, missing at UC Berkeley: a medical school. This meant her research could be more closely linked to the clinical sciences.

Bertozzi now directs ChEM-H.  Within that institute, she directs the Chemistry-Biology Interface Predoctoral Training Program, which helps train graduate students to bridge the gap between basic science and research.

She also co-launched the university’s Postbaccalaureate Program in Target Discovery to prepare recent college graduates from diverse and historically underserved backgrounds to apply for doctorate programs in the sciences.

On Wednesday, she thanked her students and postdocs “who took a chance and joined my lab,” she said, ” when I was brand new professor with no track record and no reputation, proposing to do all kinds of crazy things — like chemistry in cells, and in people.”