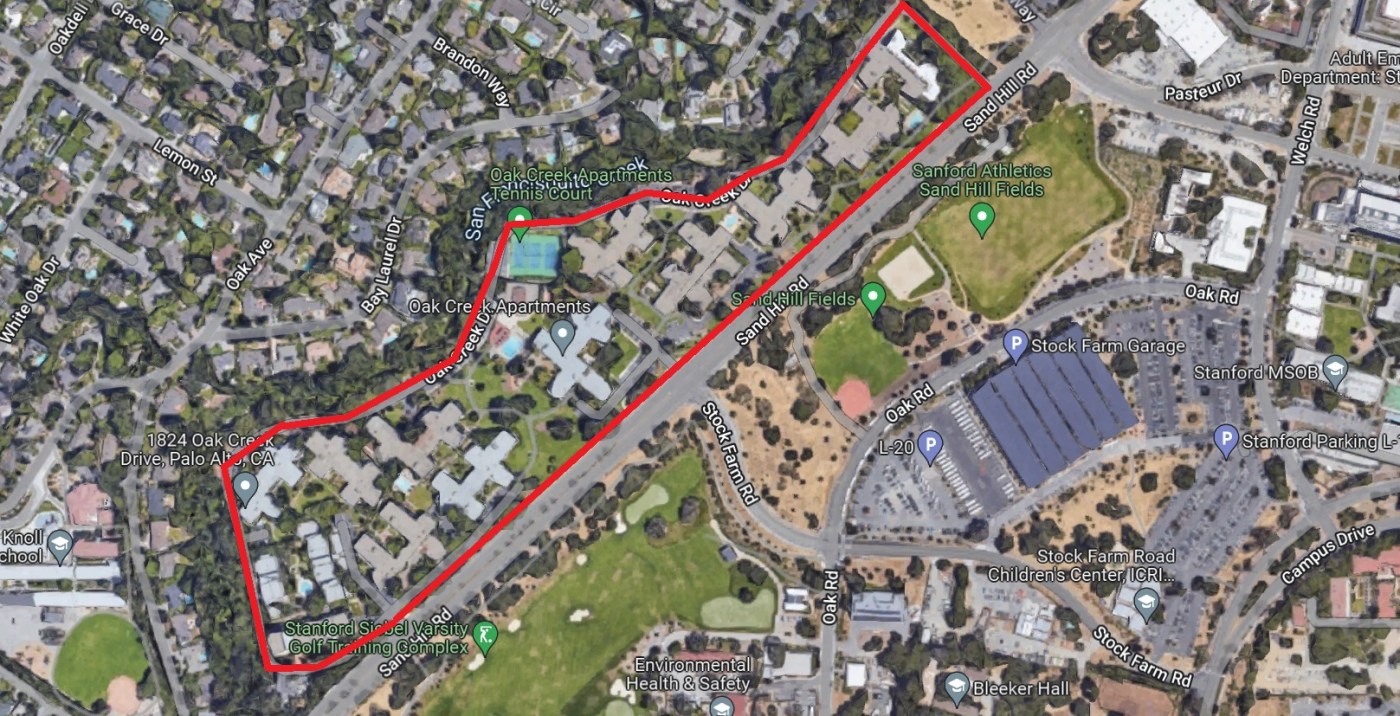 PALO ALTO — Stanford University has gained ownership of a big apartment complex in Palo Alto that’s next to the college through a byzantine array of transactions, public records indicate.

Oak Creek Apartments located at 1600 Sand Hill Road in Palo Alto is the residential complex that’s at the center of a web of intricate real estate endeavors that Stanford wove this month.

The apartment complex totals 759 units in several three-story buildings next to Stanford University.

Stanford, acting through an affiliate, completed two notable transactions: The university-controlled affiliate took over a $125 million loan that the sellers obtained in 2015, and the university’s affiliate also took ownership of the ground lease that the college had provided to the sellers.

The sellers of the ground lease and the borrowers of the $125 million loan were San Francisco-based Merena Properties and Woodside-based Pivnicka Properties.

Both of these transactions were completed a few days ago, according to documents filed on Sept. 15 with the Santa Clara County Recorder’s Office.

The university, through its board of trustees, had already owned the land beneath the apartment buildings, even before the recent transactions. Stanford real estate official Jean Snider and university media relations representatives didn’t respond to requests for a comment regarding the Oak Creek Apartments situation.

The ownership arrangement for Oak Creek Apartments mimics the real estate structure that the university has established over a period of decades in the 700-acre Stanford Research Park in Palo Alto.

Numerous buildings are owned by real estate investors or tech companies that lease the land beneath the buildings from Stanford University. The university owns the land in the research park, which includes 10 million square feet of office space.

With the completed assumption and assignment transactions for Oak Creek Apartments, Stanford University and its affiliate now own the apartment buildings and the land beneath the residential structures, the county documents show.

By assuming the mortgage and being assigned ownership of the ground lease that it had previously provided to the owners of the buildings above the land, it appears that Stanford was able to skirt recording a deed that would give a precise price for the property.

The contact information and the mailing address for the affiliate are associated with a Redwood City office for the Stanford land, buildings and real estate unit.

The assessed value of the land and the buildings involving Oak Creek Apartments was $34.7 million as of mid-2022.

Yet for at least two reasons, it appears the assessed value is far less than the market value of the apartment complex and the land.

For one thing, the $125 million loan that was issued in 2015 to the sellers far exceeds the assessed value.

Plus, while purchases of huge apartment complexes with several hundred units aren’t an everyday occurrence in the Bay Area, some deals involving residential rental centers in Santa Clara County this year offer a clue as to the minimum value of Oak Creek Apartments.

Two big apartment buildings, the 551-unit Platform Urban Apartments in San Jose and the 333-unit Eleanor Apartments in Milpitas, were both bought for roughly $580,000 per unit in purchases that were completed at the end of July of this year. Those were straightforward deals involving purchases of the land and the structures.

Some property experts believe Oak Creek Apartments, considering the location perched between San Francisquito Creek and the university, could be worth more, potentially putting the purchase price in the $600 million range.

Stanford University has bought at least one large apartment complex near the college.

In 2017, the university paid $130.5 million for a 167-unit apartment complex with ground-floor retail at 4740 El Camino Real in Los Altos. The purpose of that deal was to create a site for additional housing choices to benefit Stanford staff and faculty.