Staring at your phone too long may give you WRINKLES, study warns

Staring at your phone for too long could give you wrinkles, an academic study has suggested — after it found blue light from the devices may speed up aging.

Almost every adult in the western world is exposed to blue light from phones, work computers and televisions every day.

But now scientists at Oregon State University have found that when fruit flies are put under the glaring light for 14 days they showed signs of impaired cell function and neurodegeneration — or aging.

Dr Jadwiga Giebultowicz, the biologist who led the study, warned it may be having a ‘detrimental effect on a wide range of cells in our body’.

‘Our study suggests that avoidance of excessive blue light exposure may be a good anti-aging strategy,’ she added.

Previous research has already warned too much screen time raises the risk of obesity and mental health problems. There are also concerns that blue light strains the eyes, leading to blurry vision, macular degeneration and cataracts — and disrupts the circadian rhythm making it harder to fall asleep. Many devices already have in-built mechanisms allowing users to reduce the blue light they emit. 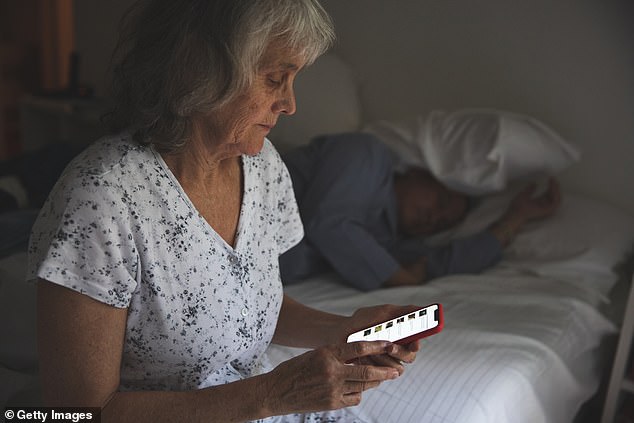 The scientists said that avoiding excessive screen time may be an ‘anti-aging strategy’. They are due to undertake more research (file photo)

In the study — published today in the journal Frontiers in Aging — scientists split fruit flies into two groups.

One group was exposed to blue light continuously for ten or 14 days, while the second was kept in contast darkness.

The flies were then killed, and the scientists examined cells in their heads for differences.

HOW CAN YOU REDUCE YOUR BLUE LIGHT EXPOSURE?

USE a blue light filter on your phone, tablet or computer to shield skin and eyes at night, advises Dr Alejandro Sanchez de Miguel, a postgraduate researcher at the environment and sustainability institute at the University of Exeter.

APPS which filter blue light towards the evening include f.lux for your computer and phone. Others such as Twilight or the ‘night mode’ setting on your device will reduce blue light emitted at any time.

EVERYONE should wear factor 50 suncream with five-star broad spectrum protection, to block UVA and UVB light, as well as iron oxides, which protect against blue light, says Dr Andrew Birnie, a consultant dermatologist and skin cancer specialist at the William Harvey and Kent and Canterbury Hospitals.

AVOID using your phone or PC in the dark, as your pupils will dilate and take in more blue light, says Dr Ajith Karunarathne, an assistant professor in the University of Toledo’s department of chemistry and biochemistry.

Those exposed to blue light for 14 days had higher levels of the chemical succinate — suggesting impaired energy production.

They also had lower levels of glutamate — key for communication between cells — which the scientists said indicated the start of neurodegeneration.

The flies were exposed to a much stronger blue light than that emitted by phones and laptops.

And they were under it continuosuly for up to 14 days — rather than just a few hours.

But the scientists said their results suggested the light could trigger changes in cells that accelerate aging.

They even suggested the blue light could cause ‘premature death’.

Giebultowicz added: ‘LEDs have become the main illumination in display screens such as phones, desktops and TVs, as well as ambient lighting, so humans in advanced societies are exposed to blue light through LED lighting during most of their waking hours.

‘The signaling chemicals in the cells of flies and humans are the same, so the there is potential for negative effects of blue light on humans.’

She added: ‘The results from this study suggests that future research involving human cells is needed to establish the extent to which human cells may show similar changes in metabolites involved in energy production in response to excessive exposure to blue light.’

The scientists have previously shown that flies exposed to blue light ‘turn on’ genes to protect them from stress.

They have also found that those kept in darkness tend to live longer.

And pass another three hours in front of the television.

But there is a growing body of research spending too long in front of blue light could damage someone’s health — and make it harder to get to sleep.

Several studies have warned it can damage the circadian clock — the biological timer all cells run on to determine the time of day.

In June, scientists in the Bay Area even suggested blue light could damage immune defences for the eye, raising the risk of eye problems.