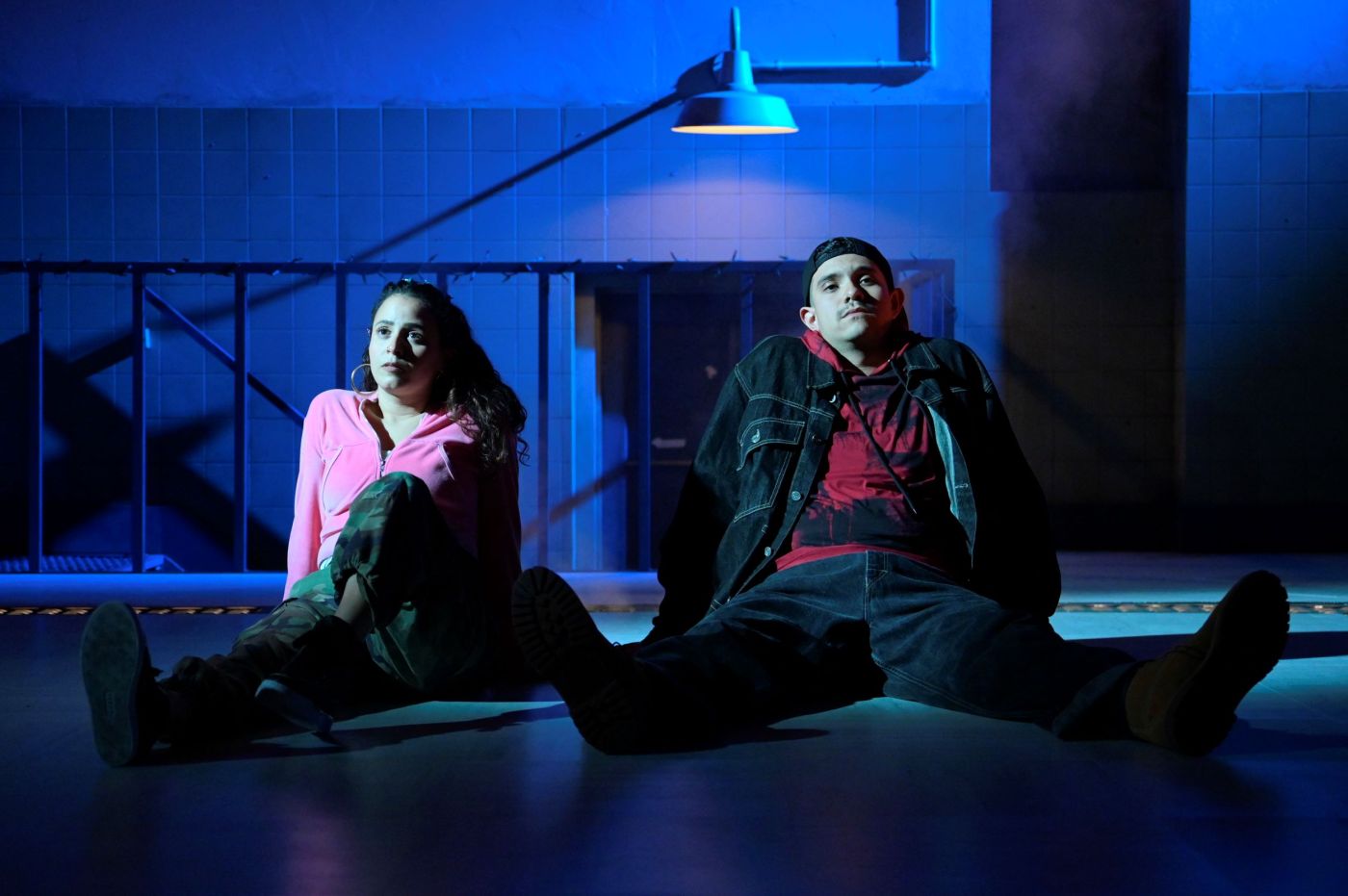 Despite its title, “Sanctuary City” isn’t actually about cities that limit their cooperation with federal immigration enforcement agencies. But Martyna Majok’s play at Berkeley Repertory Theatre does center on two teenage undocumented immigrants in the early to mid 2000s struggling with the question of how to obtain legal status.

Born in Poland and raised in New Jersey, playwright Majok is a 2018 Pulitzer Prize winner for “Cost of Living.” “Sanctuary City” premiered off-Broadway in 2020 in a New York Theatre Workshop production a few days before the COVID shutdown and reopened in September 2021.  Berkeley Rep’s West Coast premiere is presented in association with Arena Stage in Washington, D.C., which is producing it in October.

In the program the characters are called B and G (boy and girl), and we never learn their names. Although they’re played by Latinx performers, their nations of origin are also never specified.

María Victoria Martínez displays a deep reserve of hard-won fortitude as G, a high school student who frequently crashes at her friend B’s apartment. Hernán Angulo exudes bewilderment as B, who feels trapped in a life under the radar, afraid to apply for college lest he get caught. Their circumstances are different, but they’re in this together, maybe each other’s sole source of support.

For the first half of the play, the action shifts constantly back and forth between different scenes in different times, sometimes just a few lines of one before shifting back to the other. Each shift involves a dramatic change in Cha See’s lighting and a loud percussive thump in Fan Zhang’s sound design. Frequently it’s two different conversations closely juxtaposed with each other, but sometimes it’s a sampling of many similar conversations on the same topic, such as concocting excuses for G’s frequent school absences.

David I. Reynoso’s set looks like an outdoor courtyard, with grimy walls, a short stairwell leading down to a half visible door, and two double doors chained shut.

In the center of the pale tiled floor is a large square ringed with floor grates, mirrored by a parallel square of fluorescent lights overhead. For almost the first hour of director David Mendizábal’s tightly choreographed production, the two teenage characters seldom if ever leave that square. They constantly shift positions within it as they jump back and forth in time from one fragment of a scene to another. Usually they seem to be in B’s room, but other times they could be anywhere.

It feels as if the two of them are each other’s whole world. We hear a little about other parts of their lives, especially their mothers, but what we actually see is them leaning on each other, coming to each other for comfort and security, for sanctuary.

There’s a ritualistic quality to the frequent repetition in the play, as if their conversations are a sort of mantra to keep each other close and protect them from the world.

Only when one of them leaves town for a while is this sacred shared broken. From then on, they walk in and out of the square as if it is simply any other space. And the closeness between them is similarly compromised, strained, perhaps broken.

When a third character finally enters an hour into the play, it’s startling. He feels like an intruder in their world. Kim Fischer is immediately defensive and standoffish as Henry, threatened by the connection between the other two and battling to protect his connection to one at the expense of the other. Unlike them, he has a name, but that almost makes him less real than they are, more limited. He’s stuck in the role of the other, the outsider.

After many twists and turns, the play leaves us full of gnawing uncertainly that feel appropriate to the characters’ plight. Like so many people who were brought to this country as children, their fate is subject to the whims of the people in power and the people in their own lives who hold power over them.