The Chicago Bears seem to be creating an identity with flashes of optimism. Here’s how all 3 phases fared vs. the Seattle Seahawks. 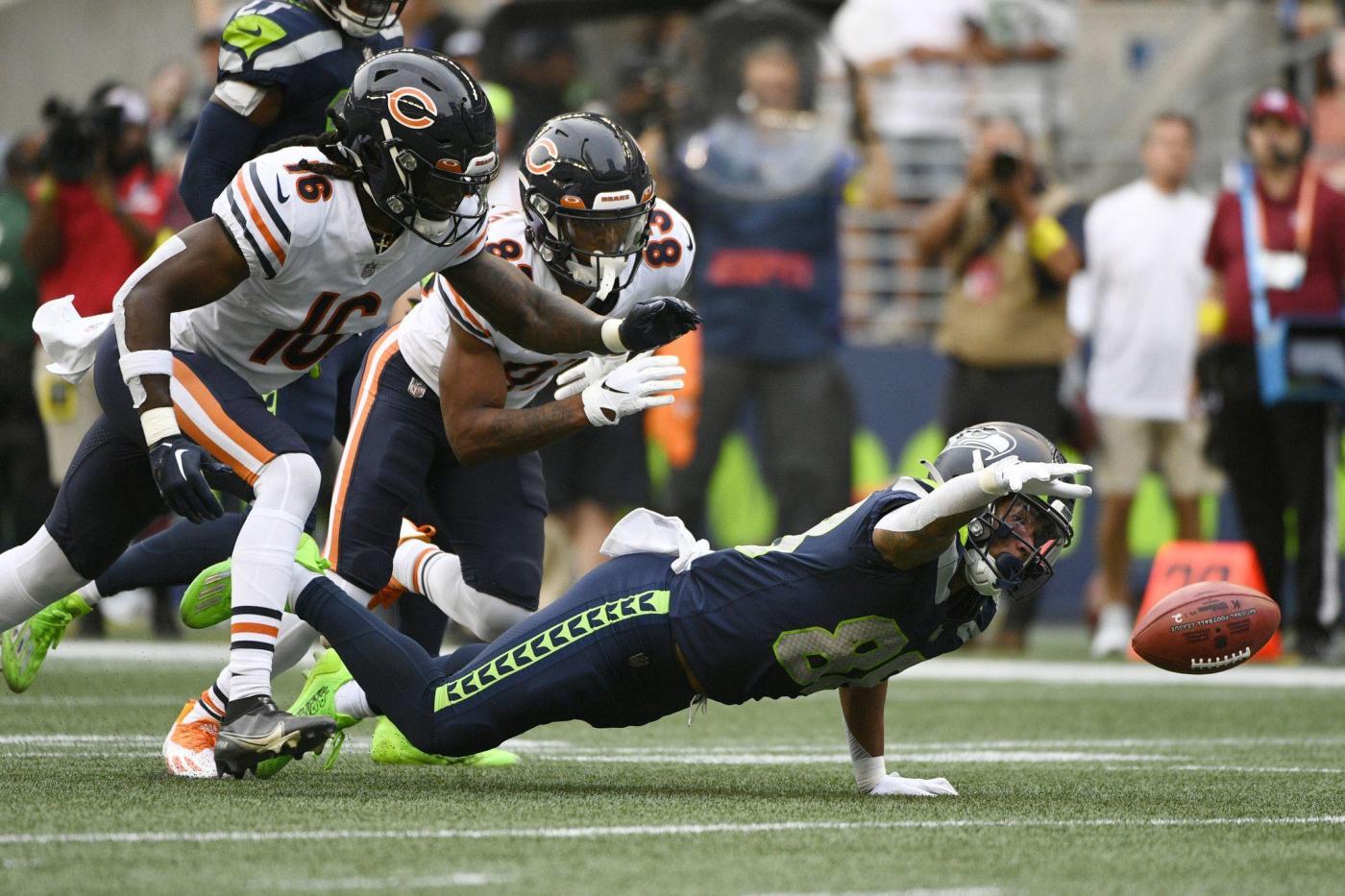 With a high-effort performance on a short week on the road, the Chicago Bears gave coach Matt Eberflus exactly what he was looking for in Thursday’s 27-11 defeat of the Seattle Seahawks.

Sure, it’s preseason. And the big-picture significance of the Bears’ 2-0 start must be kept in proper perspective. (Translation: ultimately, it means very little.)

But winning always beats losing, no matter the stakes. And it has been clear that players have been responding to Eberflus and his coaching staff and playing with intensity and cohesion. Here’s our three-phase review of Thursday’s victory.

Reason for optimism: Cole Kmet has a chance to become one of Justin Fields’ best friends in 2022 with so little solidified behind Darnell Mooney in the receiving corps, so it was encouraging to see Kmet contribute in a major way on the opening drive after missing the preseason opener with an undisclosed injury.

A tight end screen on the first play from scrimmage gave Kmet an opportunity to show off his run-after-catch ability. He gained 12 yards on that play with eight coming after he was initially hit by Seahawks linebacker Joel Dublanko.

Five plays later, Kmet came free on a crossing route and made a 19-yard catch. Fields, operating off a play fake and rolling to his left, had enough time to set and fired a dart. Kmet gained separation from linebacker Lakiem Williams and moved the chains. It was the Bears’ second-longest gain from scrimmage in the game and more evidence that a Year 3 breakthrough could be in store for Kmet, especially if Fields and coordinator Luke Getsy prioritize him.

“(It’s) his attitude,” Griffin said. “He’s got all the tools. But a lot of guys have tools in this league. It’s the want-to to get better, to learn, to take in knowledge and then put it out on the field. He’s shown he can do that. He will do that. That’s what makes me believe he’s going to be a great tight end in this league.”

Reason for concern: Fields dropped back to pass eight times on his only series and faced a fair amount of pressure. The Bears quarterback wasn’t sacked, but there was enough leakage up front to induce some anxiety.

On the second play from scrimmage, for example, running back Khalil Herbert was a tick slow with his blitz pickup, allowing Cody Barton to disrupt Fields in the pocket and forcing a rushed sidearm incompletion into the flat.

Two snaps later, a collapsing pocket sent Fields into scramble mode before he could set at the top of his drop. He ran for a 1-yard gain and had a near fumble on that third-and-3. On the next snap, Poona Ford’s successful rush against right guard Teven Jenkins again sent Fields fleeing the pocket and needing to quickly find Herbert as his checkdown option.

The Bears offensive line isn’t going to become a sturdy wall overnight. And it will be up to Getsy to design and call plays accordingly while allotting the protection manpower that is needed. Fields will also have to use his agility to slip away from trouble and erase some of the mistakes up front and with failed blitz pickups. The bigger fear, though, is that if a developing quarterback is forced to deal with constant heat that disrupts his timing and effort, the evolution and growth of the offense will be impeded.

Next week’s preseason finale in Cleveland against the Browns could offer one last game opportunity to shore things up, depending on how much Eberflus opts to play his starters.

Worth noting: In last week’s review, we gave Eberflus and his staff high marks for handling a challenge situation efficiently, getting a 9-yard Chiefs completion overturned and turning a third-and-1 into a third-and-10. (The Bears then turned that third-and-10 into a takeaway and a short-field touchdown drive.)

That’s the way it should be done. So it was only natural to question why the Bears coach declined to challenge a second quarter incompletion Thursday night that looked as if it should have been a 9-yard Isaiah Coulter reception.

The completion came on a hot read from Trevor Siemian to Coulter as Siemian avoided a sack. Coulter got his left hand and right forearm under the ball, which never touched the ground. It should have been enough to convert third-and-8 and keep a potential scoring drive alive. But after the officials ruled the pass incomplete, Eberflus never threw his challenge flag despite having plenty of time to do so and having the benefit of the play happening in front of the Bears sideline.

“A couple coaches on the sideline thought it bounced on the ground,” Eberlus said. “We got one good look upstairs and that was it. We didn’t have a good second look at it so we just decided to let it go.

“In real time in a real game, maybe I would’ve thrown (the challenge flag) in there. But we didn’t have a second look.”

The Bears then took a delay of game penalty before punting.

Reason for optimism: The Seahawks didn’t score until 29 seconds remained in the third quarter, snapping a stretch of 17 possessions dating to last weekend that the Bears defense shut out opponents.

The Seahawks managed only five first downs in the first half after the Kansas City Chiefs had two in their scoreless second half against the Bears.

Much of the production is coming from second-, third- and sometimes fourth-team players who may not play major roles in the regular season. But it has been clear this month that Bears defenders have heard coordinator Alan Williams’ request to “lead the world in hustle.”

The Bears defense is establishing an identity and setting a standard for what things should look like. Through two preseason games, things have looked encouraging.

Reason for concern: The secondary still isn’t whole. Rookie safety Jaquan Brisker couldn’t build on his preseason debut, sitting out two practices this week with an undisclosed injury before missing Thursday’s game. Cornerback Kindle Vildor was also out of action in Seattle, leaving DeAndre Houston-Carson and Lamar Jackson to run with the starting secondary.

Depth remains an under-the-radar issue in the defensive backfield with Thomas Graham Jr., Tavon Young, Dane Cruikshank and Greg Stroman injured. The Bears have a little more than two weeks remaining before Week 1 practices begin, so it will be worth monitoring the ins and outs of their defensive backs and any potentially related roster moves.

Worth noting: Rookie cornerback Kyler Gordon was on the field for 18 snaps in his preseason debut, showing off some of his hustle and athleticism. Gordon’s first blitz opportunity came in the first quarter as he tore out of the slot and pressured Seahawks quarterback Geno Smith into a frantic throwaway. He almost got to Smith for a sack and vowed to finish better going forward.

Later in the first half, Gordon’s tackle attempt on Seahawks running back Travis Homer wasn’t quite sound enough, turning should have been a 5-yard gain into a 33-yard chunk play. This is all part of the experience the rookie needs to gain as he takes on a leading role for a defense that is going to count on his playmaking instincts. At a minimum, Gordon’s comfort and self-belief are providing fuel for his growth.

The third-round pick out of Tennessee ripped off a 48-yard punt return in the first quarter with a burst that got him into open space and free up the left sideline. Jones was patient yet decisive and showed off the electricity that excited the Bears when they drafted him. Gordon and Duke Shelley provided key blocks down the left side of the field.

Jones also had a 31-yard kickoff return to open the game, fumbling at the end of that run but quickly recovering. His ability to quickly bounce back from that near-disaster was notable.

“I wasn’t the first to fumble and I won’t be the last to fumble in this league,” Jones told reporters after the game. “It’s all about short memory. If you allow that to creep on you, it will affect your next play, and you never know your next play might be your biggest play.”

Jones certainly appears to be in line to handle both return roles when the regular season begins.

“He’s explosive,” Eberflus said. “It’s a challenge for him because he’s a rookie and he’s going to have to come in there and show guys what he can do. I think he’s up for the challenge.”

Reason for concern: The Bears were ahead by 24 points with less than 5 minutes remaining, essentially garbage time in the fourth quarter of a preseason game.

But a muffed punt and an inability to recover an onside kick will lead to some added aggravation and correction in the next special teams meeting.

Rookie Dazz Newsome, who muffed a punt in the preseason opener, mishandled another one Thursday night. This time, though, Newsome’s mistake was the result of running back De’Montre Tuggle colliding with him right before he attempted to catch the ball. The Seahawks recovered and quickly turned the takeaway into a touchdown.

Again, many of the players on the field in those closing stages won’t be a part of the Bears’ regular-season plans. But the situational blunders should not be overlooked and the Bears coaches should continue to make corrections and harp on the need to finish strong.

Worth noting: Credit the Bears for tacking on a special teams touchdown in the final minute of the first half with the perfect combination of effort and awareness.

Seattle’s Cade Johnson offered up a gift, muffing a Trenton Gill punt at his own 5-yard line with 25 seconds remaining. Three Bears had an opportunity to recover the loose ball with rookie safety Elijah Hicks pouncing on it across the goal line.

Familiar with Eberflus’ H.I.T.S. principle? That sequence checked off every letter.

Yes, the Seahawks had a surprising number of “that just can’t happen” moments. But the Bears put themselves in position to capitalize. And that score at the end of the half is exactly the kind of momentum-building spark that Eberflus believes his brand of football is designed to create.