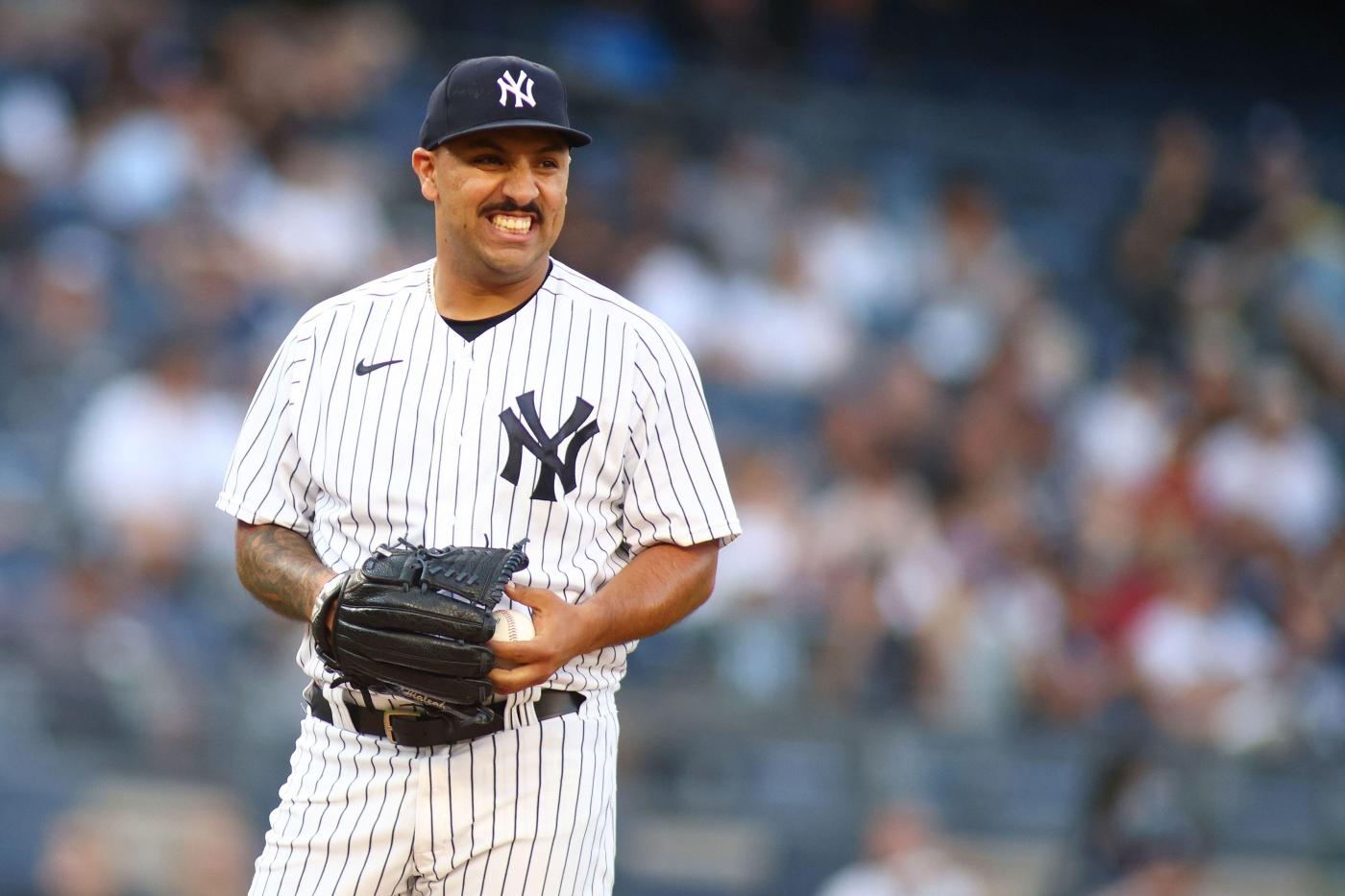 Nestor Cortes walked off the mound Wednesday night in the sixth inning. The lefty who has been the Yankees’ best pitcher so far this season looked a little gassed to his manager.

“I do think he kind of hit a little bit of a wall there,” Yankees manager Aaron Boone said after Wednesday night’s 4-3 win over the Rays at the Stadium. “In that last inning. I thought his stuff fell off just a little bit.”

Cortes had an odd error in that inning, where the throw back from the catcher got through the webbing of his glove and hit him in the head and bounced away to the outfield.

“I don’t know if that had anything to do with it,” Boone said. “But I do feel like it kind of ran out of steam a little bit there. And that’s extending but overall I thought it was really sharp.”

It’s those little things that the Yankees will be watching closely with Cortes and Luis Severino. Cortes has thrown a max of 130 innings “with spring training and postseason,” in his career. Severino had 27.2 innings over the last three seasons. It’s no secret the Yankees have to monitor their innings and workload this year to try and keep them healthy.

Cortes walked off the mound Wednesday night with 69.2 innings pitched through his first 11 starts. He said his arm feels good and the numbers back that up. The lefty has a team-best 1.93 ERA (6th best in the majors and second in the American League) and a 0.93 WHIP. He has struck out 73 and walked 17 of the 207 batters he has faced.

“I want to throw 200 innings,” Cortes said, “but I’ve never done that before, so I know they are going to manage my innings. Like last time out (in Minnesota) I had an extra day and (Wednesday night) I had another extra day.”

It’s the same with Severino, who was scratched from Thursday night’s game with a fever and chills and was awaiting further COVID testing. The Yankees can manage him for a while with an off day here and there. The right-hander missed most of 2019 with a torn lat muscle and then had Tommy John in March of 2020 and struggled in his rehab. Severino returned in September of 2021 to make five appearances out of the bullpen.

Severino heads into Wednesday’s start with 61 innings pitched, but also with results that show he is finally, truly healthy. Severino has struck out 71 in those 61 innings and walked 15 of the 246 batter’s he faced over 12 starts. He has a 2.80 ERA and a .213 batting average against.

With 100 games left on the season, however, it’s going to get harder and harder to manage their innings with just scheduled off days. A spot starter or a sixth starter is a possibility, Boone admitted last week.

Domingo German threw to live batters in three simulated innings on Wednesday at the Yankees’ complex in Tampa. It’s likely the final step there before the right-hander who had a breakout season in 2019, but derailed his career with a domestic violence incident that cost him the entire pandemic-abbreviated 2020 season.

German, who started the season on the injured list with right shoulder impingement syndrome, will likely head out on a rehab assignment soon and then when activated could be part of the answer to how the Yankees manage the workload of Cortes and Severino.

Boone has been vague on the plan with German. The 29-year old, who won 18 games in 2019 before he was suspended in September, has been used both out of the bullpen and in the rotation in the past. The fact he threw three innings against active hitters is an indication the Yankees are preparing him to start, or at the very least piggyback with a starter and be a guy who carries some innings.

“We’ll see,” Boone said of the plan for German. “I mean, we’ll kind of see and kind of get that planning going after this.”

Domingo German, who began the season on the injured list with right shoulder impingement syndrome, came through his three-inning live batting practice fine on Wednesday and is ready to begin his rehab assignment, Boone said.

The Yankees seem to be stretching German out so that he can make some spot starts, but could also be a bulk-innings guy out of the bullpen.

The Yankees were going for their 14th straight win at Yankee Stadium on Thursday night. The Bombers are 28-7 at home this season, the best in the big leagues.

“We’re playing well wherever we are. So it’s great that we have played well here. I think we’ve certainly had a home-field advantage. I think the ballpark plays to our favor and our strengths. I know our guys love playing here,” Boone said. “I think coupled with it being the Yankees and Yankee Stadium, there’s always that energy and that feeling of walking into this place. But I think when we were playing the way we are, we’ve gotten off to the start we have, it does feel like the energy is even greater this year, you know, especially coming off in 2020 where there’s no fans and 2021 where they’re slowly back integrated into it.

“And now the start we’ve gotten on to it feels like the fans have played a big role. And that’s been fun to be here playing in the kind of games we have and you felt the crowd here. And that’s been pretty cool.”