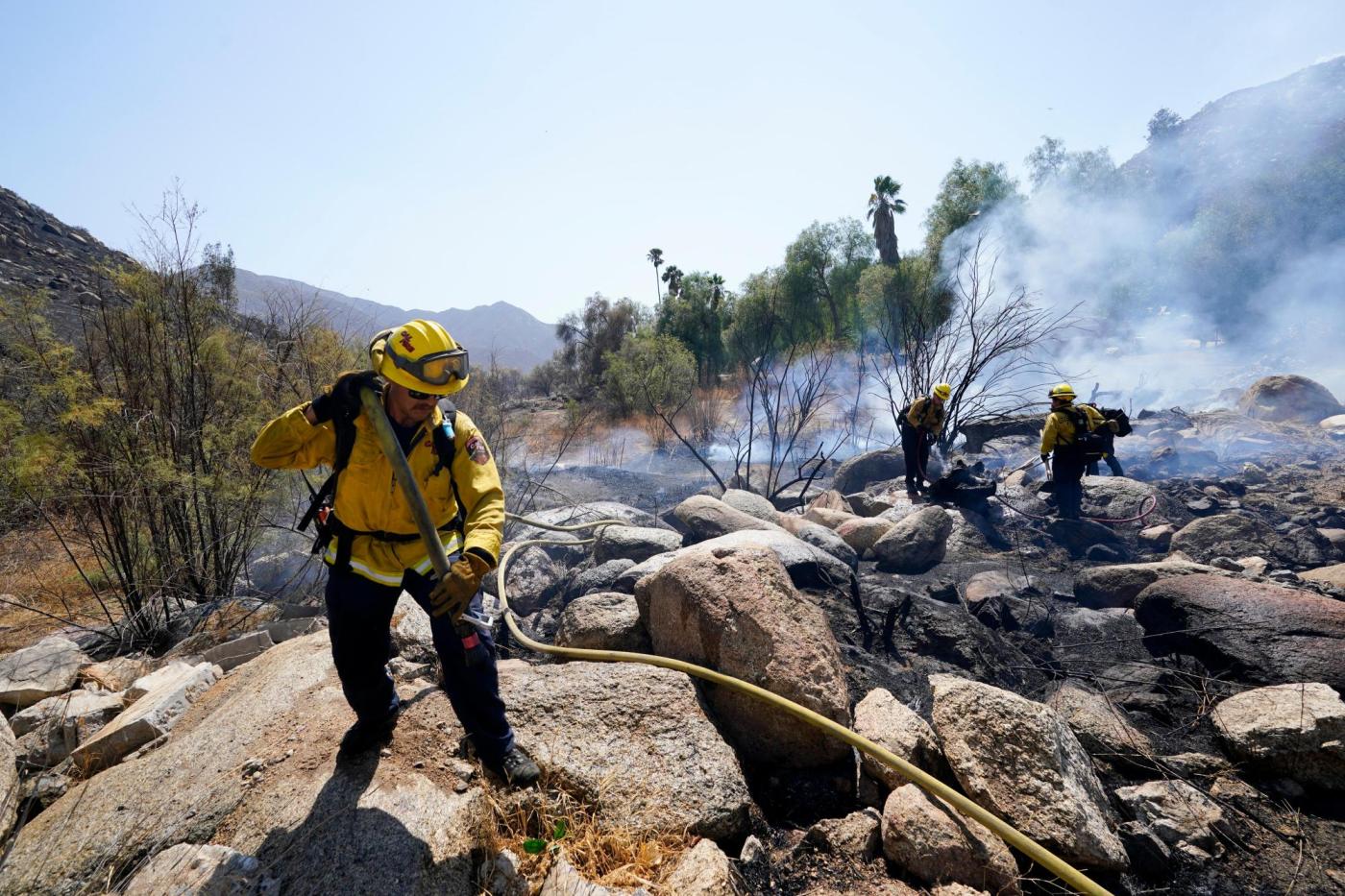 The Northern California blaze destroyed multiple homes Friday and forced as many as 7,500 residents to leave immediately, jamming roadways at the start of a sweltering Labor Day weekend. Suzi Brady, a Cal Fire spokeswoman, said several people were injured and taken to a hospital. She said she didn’t know the extent of their injuries.

Brady said residents are still evacuating and that the blaze continues to rapidly spread amid 36 mph (58 kph) winds.

She said more resources have been requested to aid at least 200 firefighters battling the blaze on the ground and from the air.

Brady didn’t know how many people have been injured or where they were taken.

The Mill Fire started on the property of Roseburg Forest Products, a lumber mill north of the town of Weed, and quickly burned through homes and prompted evacuation orders for all of Weed and the nearby communities of Lake Shastina and Edgewood, with a combined population of about 7,500 people, said Weed councilwoman Sue Tavalero.

She said there were burned homes in the Lincoln Heights neighborhood but “I don’t know how many. I’m positive several homes have been lost.”

The blaze spread quickly in hot and windy conditions, the Siskiyou County Sheriff’s Office said in a statement. The Mill Fire had burned 1.4 square miles (3.6 square kilometers), according to the California Department of Forestry and Fire Protection.

Rebecca Taylor, communications director for Roseburg Forest Products based in Springfield, Oregon, said she did not know where or how the fire started but the company evacuated its veneer plant in Weed after the fire was reported at 12:58 p.m. Friday. Some of its property is burned. The plant employs 145 people, although not all were on shift at the time, Taylor said.

“We’re just devastated to see this fire affecting the community in this way,” she said.

Evacuees described heavy smoke and chunks of ash raining down from massive flames near Weed, about 50 miles (80 kilometers) south of the Oregon border.

Christopher Rock, an employee at the Mayten Store in Montague, 30 miles (48 kilometers) north of Weed, said fire evacuees had swarmed the pumps.

“It’s really busy right now,” he said. “You can’t see the flames from here, just a lot of smoke.”

Marco Noriega, brew master at Mount Shasta Brewing Company, said he received the notice to evacuate around 1 p.m. and he sent the 10 customers and three employees away. He said the power is out and he has received little information.

The wind was blowing from the south, keeping the fire away. He sounded calm as he cleaned up.

“I’ve been through it before, so long as the wind stays in the direction it is, I’m all right. But I know the wind switches quickly,” he said by phone.

The National Weather Service issued a red flag warning for Siskiyou County from 11 a.m. to 11 p.m. Friday when area winds were expected to reach up to 31 mph (50 kph).

Willo Balfrey, 82, an artist from Lake Shastina, said she was painting Friday afternoon when her grandson, who is a member of the California Highway Patrol, called to warn her of the fast-spreading flames.

“He said, ‘don’t linger, grab your computer, grab what you need and get out of the house now. It’s coming your way.’ So I did,” Balfrey told The Associated Press.

She grabbed a suitcase full of important documents, as well as water and her computer, iPhone and chargers, and headed out the door.

“I’ve reached the philosophy that if I have all my paperwork, what’s in the house is not that important,” she said.

She stopped to get her neighbor and they drove to a church parking lot in Montague, where about 40 other vehicles were also parked.

Olga Hood heard about the fire on her scanner and stepped onto to the front porch of her Weed home to see smoke blowing over the next hill.

With the notorious gusts that tear through the town at the base of Mount Shasta, she didn’t wait for an evacuation order. She packed up her documents, medication and little else, said her granddaughter, Cynthia Jones.

“With the wind in Weed everything like that moves quickly. It’s bad,” Jones said by phone from her home in Medford, Oregon. “It’s not uncommon to have 50 to 60 mph gusts on a normal day. I got blown into a creek as a kid.”

Hood’s home of nearly three decades was spared from a blaze last year and from the devastating Boles Fire that tore through town eight years ago, destroying more than 160 buildings, mostly homes.

Hood wept as she discussed the fire from a relative’s house in the hamlet of Granada, Jones said. She wasn’t able to gather photos that had been important to her late husband.

Containment of the Route Fire along Interstate 5 north of Los Angeles increased to 37% and it remained at just over 8 square miles (21 square kilometers) in size, a Cal Fire statement said.

California is in the grip of a prolonged heat wave. Temperatures have been so high that residents have been asked for three consecutive days to conserve power during late afternoon and evening hours when solar energy declines.

On Wednesday, seven firefighters working the Route Fire in triple-digit temperatures had to be taken to hospitals for treatment of heat illnesses. All were released.

The tally of destroyed structures remained at two, and all evacuation orders were lifted.

In eastern San Diego County, the Border 32 Fire remained at just under 7 square miles (18 square kilometers) and containment increased to 20%.

More than 1,500 people had to evacuate the area near the U.S.-Mexico border when the fire erupted Wednesday. All evacuations were lifted by Friday afternoon.

Two people were hospitalized with burns. Three homes and seven other buildings were destroyed.

Scientists say climate change has made the West warmer and drier over the last three decades and will continue to make weather more extreme and wildfires more frequent and destructive.

This story has been corrected to show that Tavalero is a councilwoman, not mayor, and that Noriega was ordered to evacuate around 1 p.m., not 2 p.m.