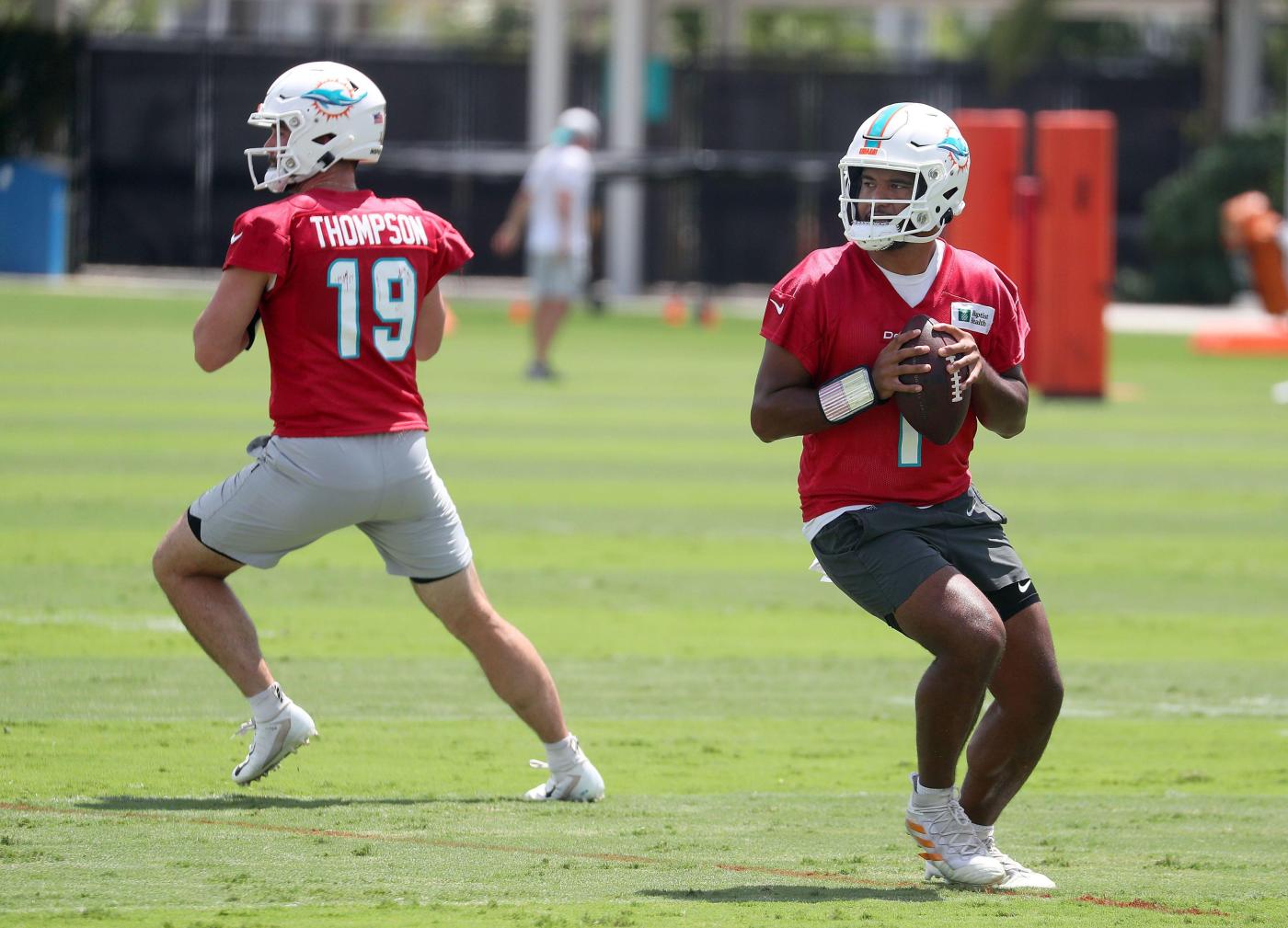 Nine months ago, Tua Tagovailoa got into a halftime shouting match with the Miami Dolphins coach who didn’t trust him for much of anything. Sunday, he starts the next season with a new coach who anoints him for pretty much everything.

That’s not just amazing progress, considering the only happening between these events involved Dolphins owner Steve Ross clumsily attempting to replace Tagovailoa for a second time.

It’s a welcome, even necessary change, this switch from tough love to unconditional love. Tagovailoa deserves a head coach in his corner and an owner not plotting his latest replacement. Does that even need to be said?

Tagovailoa also deserves a proven offense like the one new coach Mike McDaniel runs, and not the pop-gun offense with last year’s rotating play callers. He deserves a dynamic playmaker like Tyreek Hill replacing a group of receivers with the least separation in the league last year.

“I’m most excited with the playmakers we have,’’ he said Wednesday afternoon. “Check the ball down, you never know what you’re going to get. Now you can take the top off [of the defense] with guys like Tyreek.”

Finally, Tua deserves a foundational piece to anchor an offensive line like veteran tackle Terron Armstead, not a line that rated among the worst for the past two seasons. We’ll see where this line goes. But just having Armstead makes it better.

So Tua got the help a quarterback deserves to win this offseason, and here’s what the Dolphins deserve in return: A final answer by Week 17.

What the Dolphins need to know starting Sunday against New England is more than if Tua is a NFL quarterback capable of leading his team to the playoffs. They need to know over these coming 17 games if he can be one worth investing the kind of maximum millions that great quarterbacks are getting these days.

Or the Dolphins need to know if Tua is Jimmy Garoppolo, a quarterback good enough to accompany a team to a Super Bowl, if all goes right, but not one you invest in to carry you there.

There’s a warehouse of words packed around Tua. Loud negativity. Loud positivity. The only thing as annoying as those certain he can’t be an NFL quarterback are those guaranteeing he will be one of the league’s best.

Everyone has an opinion on Tua. Here’s mine: Let it play out. He didn’t overwhelm you the first two years. But he’s now been given the coaches and players to succeed in a manner. Let him show who he is over 17 games.

Tua has one special skill of throwing the ball accurately. His winning record as a starter shows he’s learned Lesson No. 1 for any NFL quarterback: Don’t make big mistakes that lose games. He hasn’t made many big mistakes. He’s smart that way. That doesn’t mean he’s a great quarterback. That’s what this year should help tell now that he has some pieces.

It’s been the oddest of offseasons, and that was for Tua, too. Ross wanted Tom Brady as his quarterback a few months after negotiating for Deshaun Watson. You can say any team would want Brady. But lots of teams with young quarterbacks didn’t.

McDaniel, meanwhile, has changed the narrative of Tua from the time he entered the door. The latest news, a small piece, is Tua was named captain. It’s only relevant in some form because a year ago he wasn’t named captain under former coach Brian Flores.

Maybe Flores pushed Tua to work harder. Maybe he’s matured in the way third-year players do. Certainly the offseason changes have given him the help and the voice to show who he is.

“Organizations make quarterbacks,’’ Hall of Fame coach Bill Walsh would say. He meant they teach them, raise them and, as the Dolphins did this offseason, find surrounding talent to help him.

The Dolphins now deserve an answer.