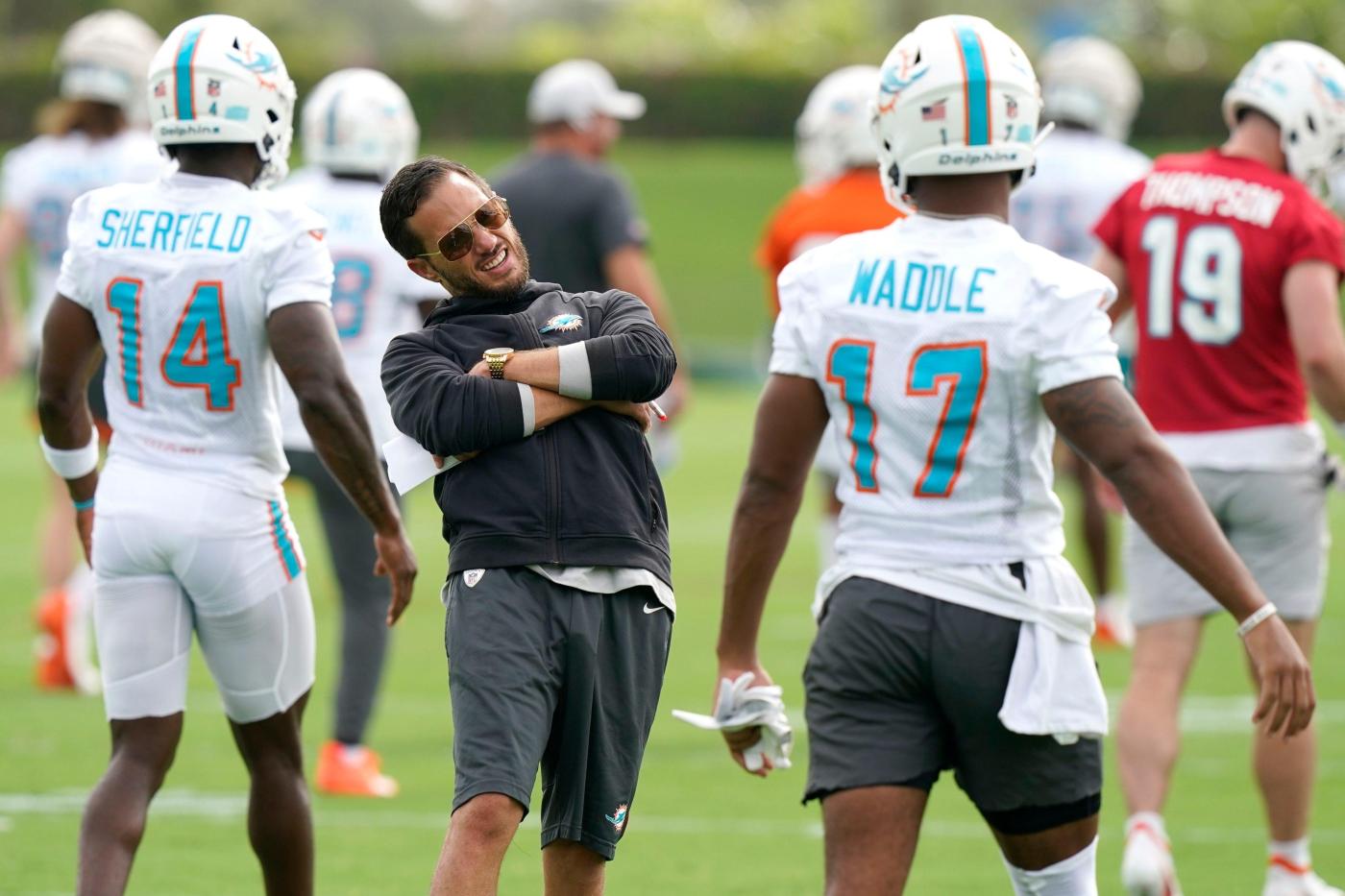 Here’s the great thing about the start of any training camp. You see the good possibilities. You understand how it all can work. Already on the second day of Miami Dolphins camp, a fun movement took root.

It’s a, “How will they cover them both,” movement. It went from offseason theory to in-practice reality Thursday as receiver Jaylen Waddle caught seven passes in abbreviated work against the Dolphins defense.

Or maybe this movement grew when Tyreek Hill moved downfield, made a blur of a move and was so wide open he stood waiting for Tua Tagovailoa’s pass to find him.

You could sit there Thursday and see what it means for NFL defenses.

Sure, it was just the second day of camp, just a morning practice with no pads. No receiver got hit. Nothing violent could enter anyone’s mind. So you could ask: Isn’t everyone over-reacting? Don’t you have to wait to see it happen in September and October to confirm what happened on a late July morning?

Well, let’s talk about what’s already confirmed beyond the fact Hill and Waddle present the fastest tandem of receivers in the NFL and caught the third-most passes (Hill in Kansas City) and eighth-most (Waddle) among receivers last year.

Let’s talk something more fundamental. Hill and Waddle were out there working hard — working to beat the defense, working their way through a new playbook, working through a day forgotten as soon as it ended.

Compare that to last year. Remember? The Dolphins receivers could have sat on a picnic blanket to watch training camp. DeVante Parker, Will Fuller and Preston Marshall missed weeks of practices while everyone in Dolphinsland insisted it wasn’t a problem.

Come September and October, it remained a problem. In an era of limited practices, you need players to practice. If there’s one takeaway from coach Mike McDaniel’s opening week, it’s that players are practicing.

Is it him pushing? A changed roster? All you know is this matters, just as Hill said it always has for him.

“When I first arrived in Kansas City, I got drafted in the fifth round,’ he said. “I feel like I could have gone higher. My mom always told me, ‘Control what you can control, and that’s energy and that’s your effort.’

“So every day I step out here on this field, it doesn’t matter what I did in the past — Super Bowl rings, how many contracts I signed, all that goes out the window. When I when I line up on this football field, I’m out here trying to do the same thing over and over again. Compete and have fun and make my teammates better. That’s my mindset.”

The San Francisco offense McDaniel brings to the Dolphins is considered by NFL minds like Jimmy Johnson to involve the best run philosophy in the league. Hill and Waddle said the pass-game philosophy is equally as productive.

“I like how we got answers for everything,’ Waddle said. “Everything a defense could do, we pretty much have answers for it. There are a lot of options for each and everybody to make plays and share the ball.”

You have to go back to Mark Duper and Mark Clayton in the 1980s to find receivers with the dynamic talent like Hill and Waddle. Waddle, in his second year, compared his relationship to Hill like that of a big and little brother. Hill, the big brother, said if they were cars that Waddle would be a, “2003 Honda Civic and I’d be a Maserati.”

He chuckled: “No, realistically, if me and him are on the same side, teammates side by side, it’d be like a [Lamborghini] and a Ferrari.”

Hill isn’t afraid of words and has things to say. He already has angered his former Kansas City fan base by saying Tagovailoa was the most accurate passer he’s played with.

He made a point Thursday of noting the talent of Kansas City quarterback Patrick Mahomes. He also did nothing to diminish the feeling of this training camp.

“This season is going to be fast and electric,’ Hill said.

Day Two of camp was all of that. You saw more than possibility. You saw how this can work the way the receivers ruled the day.