We turned up in Barvinkove looking for the hard-pressed town mayor. He had promised to tell us about plans to evacuate residents from this war-threatened area.

The Russian military has made a series of gains in the east as they try to encircle Ukrainian troops in cities such as Kramatorsk and Slavyansk.

After a series of grisly failures, Vladimir Putin has set his sights on a region called the Donbas but success depends on the acquisition of strategically important communities like Barvinkove.

The town itself now resembles an ad-hoc garrison with hundreds of troops arriving and departing via the central square.

It was here that we found members of a volunteer battalion waiting for transport.

They were all male and the majority were in their twenties – and in our well-travelled eyes, they looked pretty green.

One soldier played nervously with the safety catch on his machine gun. Another swung an AK-47 around in a way that was unnerving.

A battalion member called Vandal approached us and asked if we had any tape. Ukrainian soldiers wrap blue tape around their right arm as way of identifying themselves to each other. No one wants to be shot by their own side.

We had not brought any tape with us but the inquiry did prompt an unexpected interaction with Vandal and I want to recount parts of that discussion here.

An articulate 25-year-old from the region of Kyiv, he spoke in English gleaned “from movies and shows and video games”.

He said he had not done any fighting yet. In fact, his unit was about to go to the front for the first time. I asked him how he felt and he replied with admirable candour.

I asked: “Do you have the equipment you need? Are you confident about what you’ve been given?” 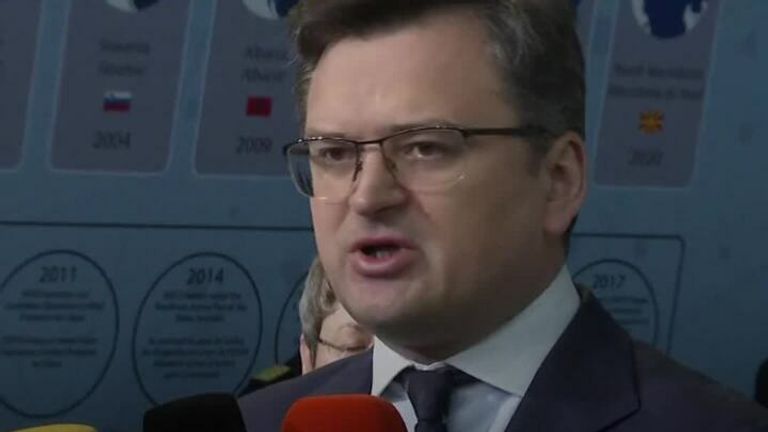 This is a key issue in Ukraine, with just about everyone, from President Zelenskyy down, complaining that they cannot fight the Russians with their current arsenal. Vandal is no different.

“We need more equipment, we need guns, precision guns so we can fight with Russians, better and faster.

“You know the Russians are afraid now, especially when they saw Javelins and NLAWs [anti-tank weapons], and other stuff, they were totally scared. They started putting this s**t on the tanks [metal anti-missile grids] but it doesn’t work. They know if a Javelin hits a tank, tank is destroyed.”

“What is your attitude towards Russian soldiers, how do you feel about them?” I asked.

This sentiment is expressed frequently, part of the lingua-franca on the Ukrainian side – but I was trying to find out how Vandal viewed the Russians as adversaries, as potential opponents on the battlefield.

Over the past few weeks, Ukrainian soldiers have told us that Russian soldiers tend to run away when the two sides engage. The 25-year-old held a different view, however.

“Usually, people think they are totally stupid, but if you have 10 soldiers, one will be smart, and you can be sure when you fight them, this one smart guy will fight with you.

“You must understand this. If you think they are all idiots, you are not going to live that long.”

Vandal told me he is not married but had left his girlfriend behind in Kyiv. That was probably the worst thing about the war.

“She said that she is really sad,” he said, chuckling uncomfortably. “But she understands I think. It is difficult when I have not seen her in weeks.”

“She probably doesn’t want you here?” I suggested.

“I am sure she doesn’t want me here. I am totally sure of that.”