The United States has joined the Democratic Republic of the Congo, Yemen and Somalia on a watch-list of nations where polio is spreading.

The virus has been detected in wastewater from five counties in New York, and one man in the state has been paralyzed by an infection.

In a release Tuesday, the Centers for Disease Control and Prevention (CDC) said this meant the U.S. would now be placed on the list of about 30 nations where the nearly-eradicated virus is thought to be spreading again. The UK and Israel, which both detected polio this year, are also on the list.

It was not clear whether the U.S. has lost its polio eradication status held since 1979, but there have been no cases of the virus’ wild type recorded to date.

Most people who catch polio suffer no symptoms, but about one in 20 face an infection of the brain or spinal cord. In rare cases it can also trigger paralysis. To combat the virus the U.S. has launched a comprehensive vaccination programme. 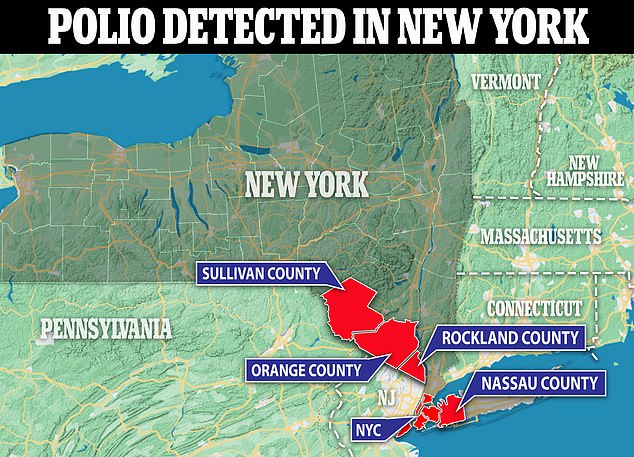 The United States has been added to the World Health Organization’s list of countries where vaccine-derived poliovirus is spreading.

Vaccine-derived is when the weakened virus used in jabs spreads from the inoculated individual to others and partially mutates back towards the more dangerous wild type.

The oral vaccine that uses this weakened virus has not been dished out in the U.S. since 2000, with the country switching to the inactivated polio jab. But it is still used in some countries including Afghanistan, Nigeria and Pakistan.

Countries are included on the list when local immunity is low enough to allow prolonged transmission of the original weakened virus.

There are about 30 countries on the list, with 21 of which having recorded poliovirus this year.

The U.S. has confirmed just one case of polio this year in a Hasidic man from Rockland County, upstate New York, who suffered paralysis.

But it has since picked up the virus in four other counties in the state including Orange, Sullivan, Nassau and New York City.

Last week health authorities in New York declared an emergency over the virus, with health commissioners saying they simply ‘cannot afford to roll the dice’ on the disease.

Since it was detected, more than 5,000 vaccines have been dished out in Rockland County to protect against polio.

Dr. José R. Romero, Director of CDC’s National Center for Immunization and Respiratory Diseases, said today: ‘Polio vaccination is the safest and best way to fight this debilitating disease and it is imperative that people in these communities who are unvaccinated get up to date on polio vaccination right away.

‘We cannot emphasize enough that polio is a dangerous disease for which there is no cure.’

Children in the U.S. are routinely offered a three-course vaccination against polio, with the first shot administered at two months old and the last by the age of 18 months.

They are also offered a booster shot between the ages of four and six years to shore-up protection.

Studies show the jab is 99 percent effective at preventing infection with polio.

But in recent years and amid Covid disruption the United States has fallen behind in vaccinating youngsters against the disease.