The US Open has been mocked after committing an embarrassing social media blunder this week.

When Italian players Matteo Berrettini and Jannik Sinner battled past their fourth round opposition into US Open quarter-finals, the tournament put together a graphic for social media.

The Italian-themed poster featured photos of each player accompanied by the words ‘Berrettini & Sinner – First Italian pair in history to reach the US open Quarterfinals’.

Of course it’s not the first time two Italians have reached that milestone at the US Open, and Twitter users were quick to point that out

‘Pennetta and Vinci?!’ said one user – referring to the Flavia Pennetta Roberta Vinci from the final in 2015. 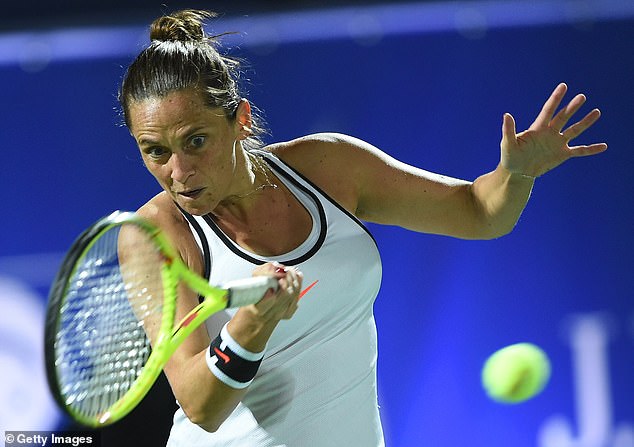 Ex Italian star Roberta Vinci has already played in a US Open quarter-final, not that the organisers remembered

‘hahaha you’d think by now folks would learn to stop ignoring the achievements of women athletes,’ commented another.

‘When will you stop embarrassing yourself? You literally had an all Italian final in 2015,’ commented a third.

It took the US Open’s social media manager 19 hours to correct the blunder.

They tweeted a photo of Flavia Pennetta and Roberta Vinci from the 2015 final along with the comment, ‘Of course this stat is for men’s singles* we all remember this’. 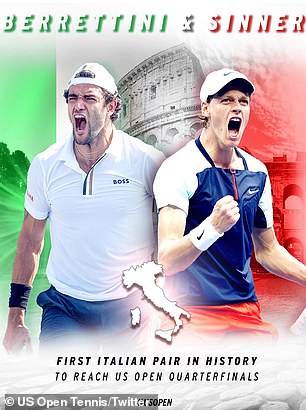 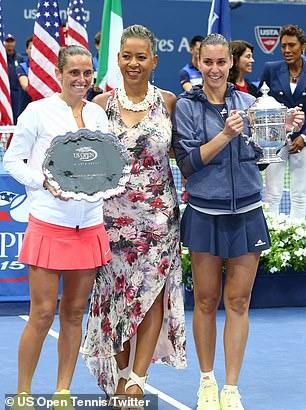 Some tennis fans were still not happy with the correction.

‘Pretty poor, US Open twitter. And of course Flavia-Roberta was bigger than the two men in the quarters as this was the *final*,’ replied one user.

‘Then you should, at least, QRT [quote retweet] the original tweet correcting yourself. Bc you did forget to add the word “men”, making it sound like it hadn’t been done by women before,’ said another.