The Vanity Fair journalist friend of fake heiress Anna Delvey is suing Netflix over the unflattering way she was portrayed in the drama series Inventing Anna.

Rachel DeLoache Williams filed a defamation suit against the streaming giant in a federal court on Monday claiming that the company knowingly portrayed her in a false, negative light.

‘This action will show that Netflix made a deliberate decision for dramatic purposes to show Williams doing or saying things in the Series which portray her as a greedy, snobbish, disloyal, dishonest, cowardly, manipulative and opportunistic person,’ the suit — which has been obtained by DailyMail.com — reads.

She claims she was depicted in the show as a ‘vile and contemptible person’ leading to a ‘torrent of online abuse, negative in-person interactions and pejorative characterizations targeting Williams.’

Williams famously spent $60,000 on a trip to Morocco with Delvey after her scammer friend claimed her own card was broken. She later had the cash refunded.

The journalist is now seeking ‘actual and presumed damages,’ punitive damages, injunctive relief and even a restraining and enjoining order requiring Netflix to remove its ‘defamatory’ scenes from the series.

An exact damages figure has not been disclosed.

But, for her part, Sorokin announced on Instagram she will testify in favor of Netflix’s portrayal of Williams. 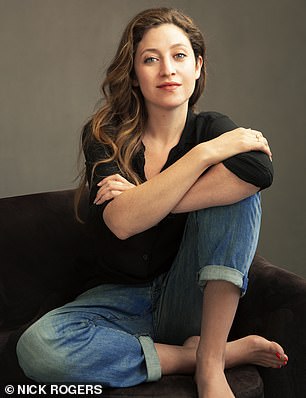 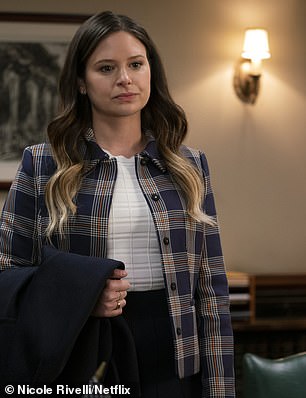 Rachel DeLoache Williams, 34, left, has filed a defamation lawsuit against Netflix for its depiction of her in the show Inventing Anna, right 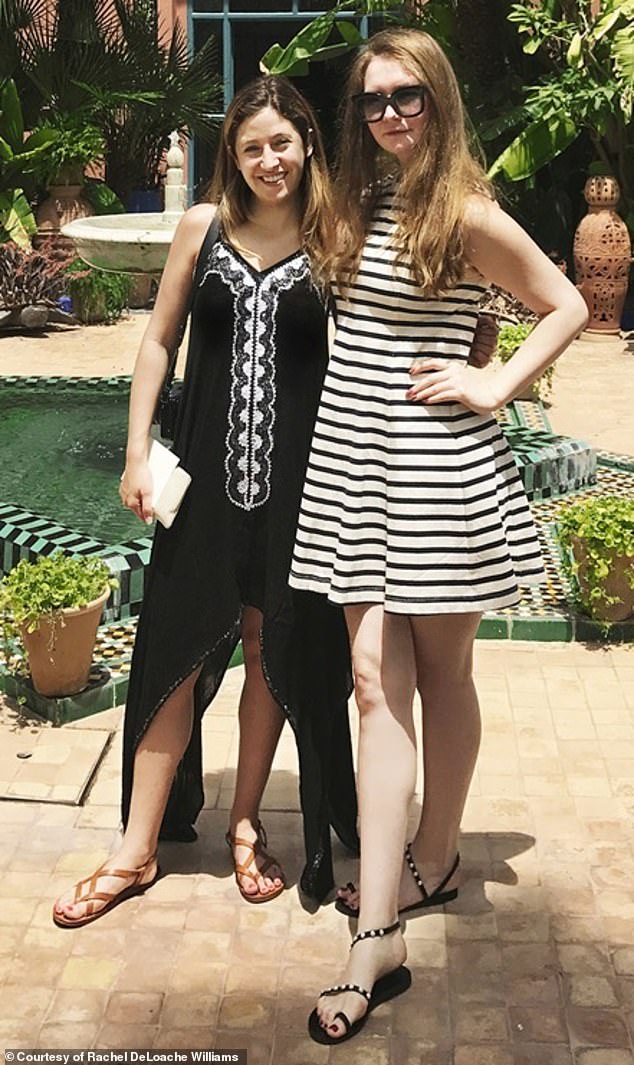 Williams had written about her experience as Anna Sorokin’s friend in a 2018 piece for Vanity Fair, where she worked as a photo editor. The two are pictured here on a now infamous trip to Morocco

Williams, 34, had written about her experiences as Anna Sorokin’s friend in a 2018 piece for Vanity Fair, where she worked as a photo editor.

In the article, she wrote how Sorokin — using the fake name Anna Delvey — pretended to be a German heiress and conned her out of more than $60,000.

Williams was later reimbursed, and Sorokin was found not guilty of conning her to pay for a Moroccan hotel.

Still, Williams went on to write a book entitled My Friend Anna: The True Story of a Fake Heiress, which was published by Simon and Schuster in 2019 and signed a since-expired contract with HBO to create a project based on her experiences.

At the same time, Netflix moved forward with its own project based on journalist Jessica Pressler’s New York Magazine story about Sorokin’s scheme.

The show, Inventing Anna, soon became an international sensation, but Williams says in the lawsuit that a majority of how she was portrayed was inaccurate. 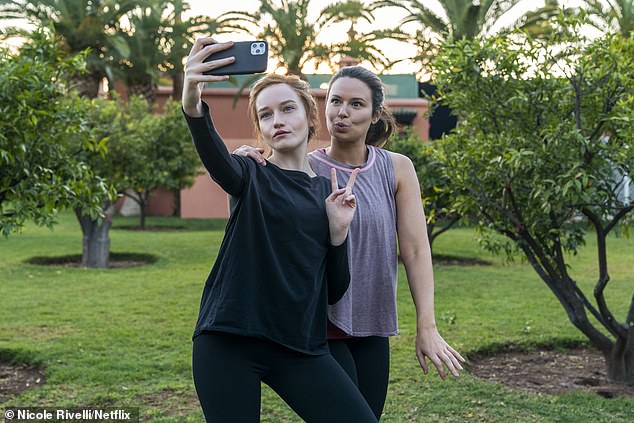 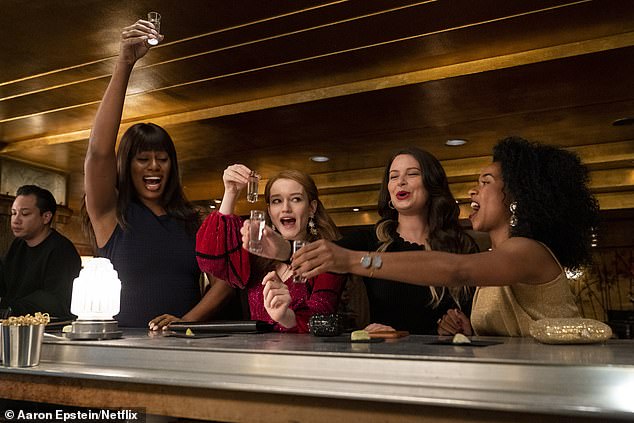 It soon became an international sensation, but Williams said the majority of how she is portrayed in the show is inaccurate

In her lawsuit, Williams seeks to refute a majority of how she was portrayed in the series, in which she is played by actress Katie Lowes.

She specifically takes aim at how her character made negative remarks about Sorokin’s friend Neff Davis, how she seemed to freeload off Sorokin, abandoned her in Morocco when she was in trouble, dropped her as a friend when she could no longer pay for things and lying to people about helping police apprehend Sorokin.

‘In reality, she never did or said those things,’ the lawsuit, filed in the United States District Court for the District of Delaware, reads.

‘Thus this action is based firmly on statements of fact, which are demonstrably false and the attribution of statements that she never made.’

It claims that series creator Shonda Rhimes knowingly changed aspects of Williams’ character for the purpose of the show, referencing one interview Rhimes gave in which she said: ‘We wanted to know what we were making up; we didn’t want to be making things up just for the sake of it.

The lawsuit then goes onto claim that Netflix purposely portrayed Sorokin sympathetically ‘ignoring or downplaying the real nature of her actions, which were dishonest, self-serving, injurious to others and doomed to fail.

‘As a counterbalance to its overly sympathetic portrayal of Sorokin, Netflix made a conscious decision to portray Williams negatively.’

It references Netflix’s own website, which described Williams’ character as ‘Anna’s opportunistic friend Rachel’ who ‘enjoys the perks Anna’s wealth provides, like luxury clothes and accessories.’

And it references an interview Lowes, 39, gave in which she said: ‘[The Rachel character is] a people pleaser. She’s young, naïve and had a privileged life. 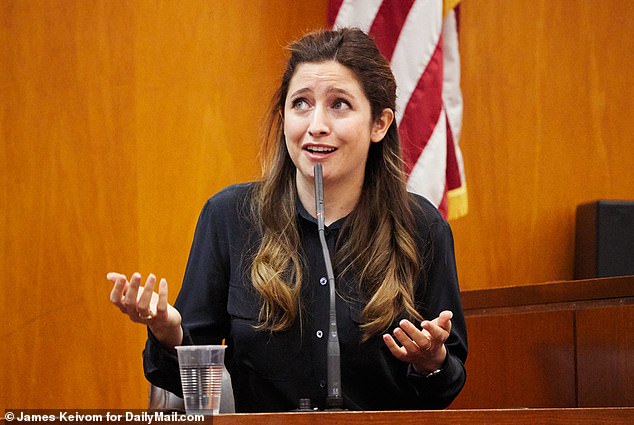 The lawsuit also argues that Williams’ character’s identify wasn’t altered or concealed like some of the other characters in the show, surmising that it was in retaliation for selling her story to HBO.

‘The catastrophic damage to Williams’ reputation was completely avoidable,’ her attorneys write.

‘Netflix gave fictional names to many of the real life protagonists in the Sorokin saga who appear in the Series, but it did not afford Williams the same protection.

‘Instead it used her real name and personal details (such as her employer, neighbor and alma mater) in the Series and cast an actress who resembled her in many ways.

‘Given the easy alternative of protecting her by using a fictional name, the decision to use her real name evidences Netflix’s intent to harm her reputation thereby justifying the imposition on punitive damages, especially if Netflix made that decision because Williams had sold her rights to the rival Sorokin project being developed by HBO.’

The suit then goes on to say that Williams had sent Netflix several cease and desist letters before filing this suit.

In a letter dated January 7, 2020, an attorney representing Williams reportedly informed the company that the statements about Williams in a 2019 press release about the show were false and defamatory.

The lawyer at the time urged Netflix not to portray her in that way, and warned that if it did, Williams would sue.

Netflix executives responded 10 days later, according to the suit, promising that Williams’ portrayal ‘will be within the bounds of the law.’

Then after the show aired on Netflix, Williams’ attorney informed Netflix that the show defamed her in several scenes.

At the time, the suit says, Netflix denied it had defamed Williams and declined to make any changes to the show. 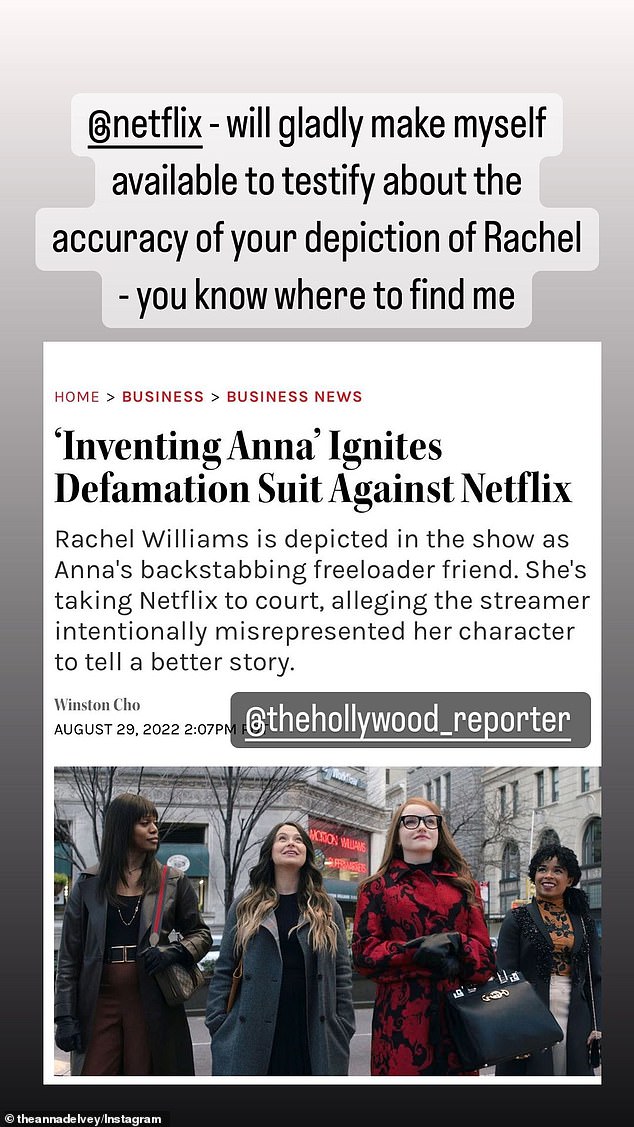 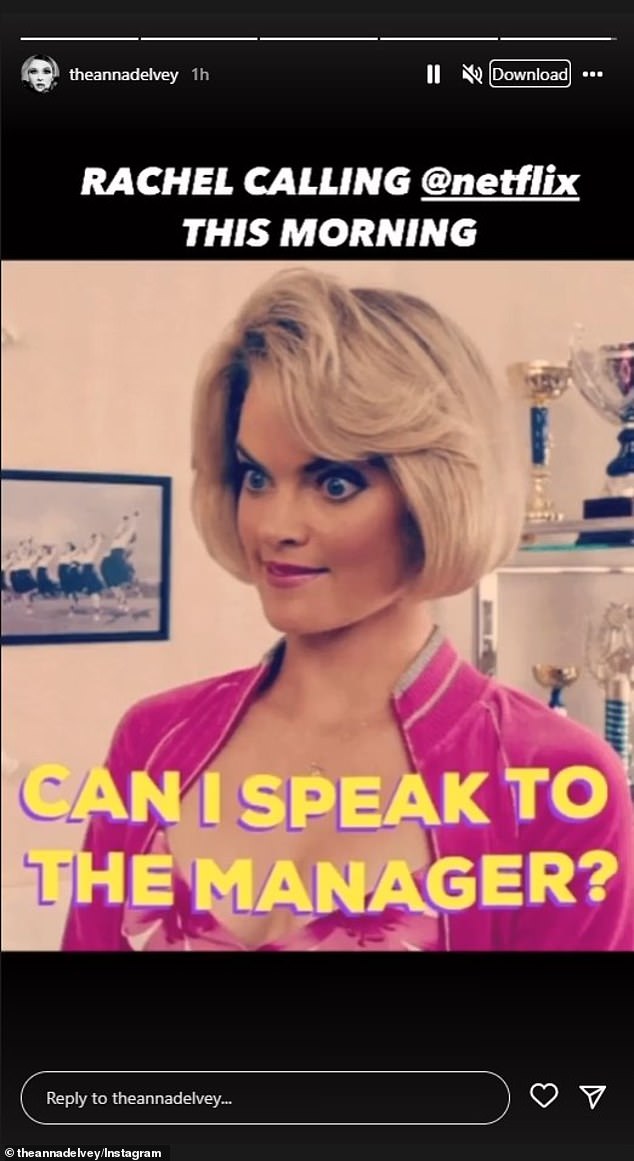 Sorokin has now said she will testify on Netflix’s behalf against Williams, posting a meme of a woman asking to speak to the manager

This is not the first time Williams has spoken out about her portrayal in Inventing Anna.

In a blog post from February 5, Williams said Netflix ‘warped’ her story ‘in a sensationalized narrative that’s holding onto reality by a thread.’

She said Rhimes ‘recast the villain as the victor, a stick-it-to-the man feminist icon,’ while ‘glossing over the gaslighting and go for a story line, as teased in Inventing Anna’s trailer that’s “completely true… except for the parts that are totally made up.’

In fact, Netflix agreed to pay the fake heiress $320,000 for the rights to her story, which Sorokin used to settled her debts and pay her state fines.

DailyMail.com has reached out to a representative at Netflix for comment.

Meanwhile, Sorokin posted on her Instagram story that she ‘will gladly make myself available to testify about the accuracy of your depiction of Rachel’ and posted a meme showing a woman asking to speak to a manager. 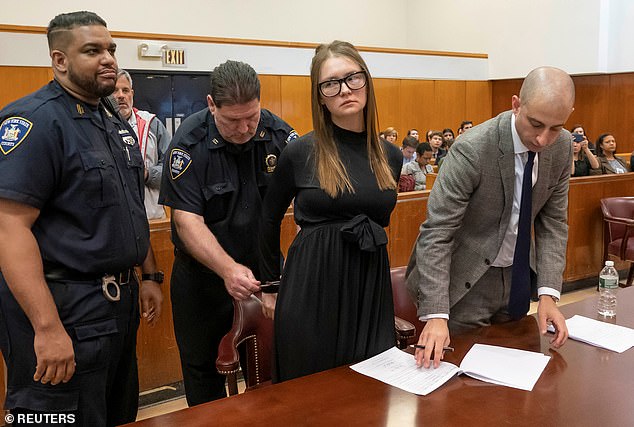 Sorokin was convicted in 2019 of second-degree larceny, theft of services and first-degree attempted larceny after she refused to pay at some of the city’s most expensive hotels

Sorokin first met Williams in 2016 while out with friends in the Big Apple.

She later planned a trip for the two of them at a $7,000-a-night villa trip to Morocco in 2017. Sorokin had vowed to pay for the trip, but never did, leaving Williams with the tab.

Williams then helped the Manhattan District Attorney set up a sting operation with the Los Angeles Police Department to arrest Sorokin.

According to the indictment, City National Bank allowed Sorokin to overdraft her account by $100,000.

She managed to keep $55,000 in the account but ‘frittered away these funds on personal expenses in about one month’s time’ with fancy hotel stays, high-end fashion purchases and sessions with a personal trainer.

In 2019, she was convicted of second-degree larceny, theft of services and first-degree attempted larceny.

Sorokin, however, was acquitted of the most serious charge – attempted grand larceny in the first degree, in connection with a $22 million loan she tried to obtain from City National Bank.

She was also acquitted of stealing $62,000 from Williams.

Sorokin was sentenced to four-to-12 years behind bars and ultimately served four years at Riker’s Island – New York’s largest prison – before being released for good behavior in February 2021.

She then settled her debts and paid her state fines with the $320,000 she received from Netflix.

But just one month later, she was rearrested by US Immigration and Customs Enforcement agents for overstaying her visa.