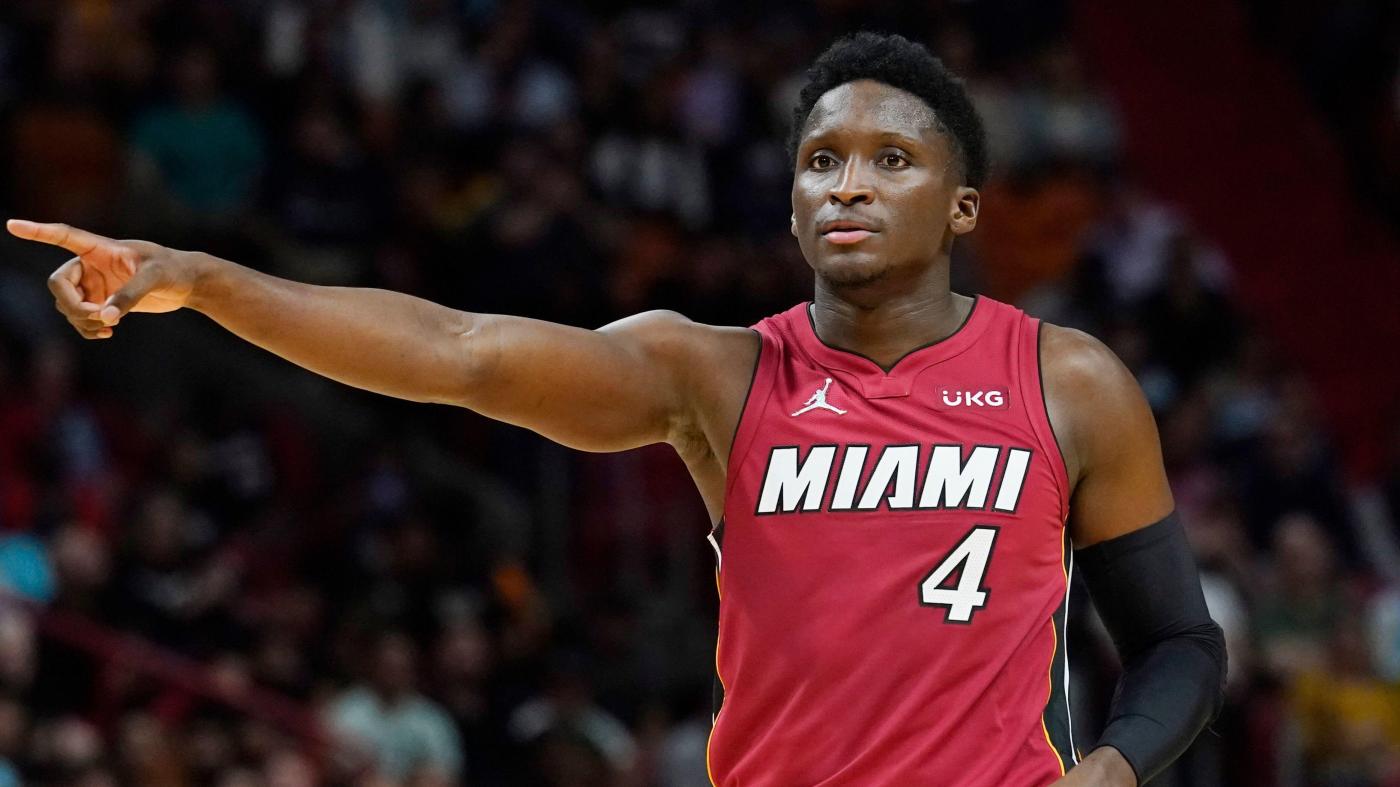 For all the swing votes regarding where the Miami Heat do or do not stand six weeks shy of training camp, there is one in particular that could both sway and shape 2022-23 for Erik Spoelstra’s team.

No, not Kyle Lowry. For all the concern of conditioning and age, Lowry, when he was on the court last season, was exactly the type of engine the Heat had lacked in recent seasons.

No, not Bam Adebayo. For all the conjecture about the lack of offensive explosiveness, only thumb surgery kept him from an All-Star berth and possible All-NBA nod.

And, no, not Tyler Herro. Fact is, he struggled only when injured in the playoffs. Let’s not minimize a season that had him as winner of the NBA Sixth Man Award and just seventh-tenths of a point behind Jimmy Butler for the Heat’s regular-season scoring lead.

Who has made a point of being anywhere and everywhere this offseason.

At a time several teammates have moved out of the offseason spotlight, the former All-Star guard has been ubiquitous. There was a conference call with South Florida media in the wake of signing his two-year, $18 million free-agency contract. Then he was alongside Adebayo at a team media session at Rolling Loud. From there, time on Vince Carter’s podcast – as well as a constant stream of workout video on just about every social-media platform.

The Revenge Tour, he terms it, is his way of insisting that he was an NBA star and will be again.

Which makes for a far different relationship with the Heat in his third season with the team.

The past two seasons, after he was acquired at the 2021 NBA trading deadline from the Houston Rockets, Oladipo and Spoelstra were in lockstep regarding where the 6-foot-4 guard stood. He was rehabbing after years of dealing with knee issues. He couldn’t be at his best, wasn’t at his best, shouldn’t have been expected to be at his best.

Now there is a star hoping to be reborn, with expectations of playing time, opportunity and exposure.

That means something has to give.

The shots and scoring opportunities will be there, considering Lowry was practically reluctant to shoot in his first Heat season, Adebayo remains far more at ease as a facilitator, and Butler can’t be bothered with something as mundane as the NBA regular season.

And that creates somewhat of a pickle with Herro, who is eligible for a max-scale extension until the start of the regular season. Make that level of investment and the expectations will remain close to what was produced during the 2021-22 regular season. But it also would be an expectation difficult to realize if utilized as an equal, or less, of Oladipo.

A pragmatist would point to the trade market ultimately serving as a way to address Heat hierarchy. By switching out to a two-year deal, Oladipo will be trade-eligible by midseason. But if Herro is extended, Herro essentially would become trade-ineligible for the season.

Considering the contributions Herro has provided dating to the Heat’s 2020 run to the NBA Finals and the opportunity to lock him up long term, it is easy to cast him, at 22, as the team’s priority.

But then consider what Oladipo offered in last season’s run to within one victory of the NBA Finals, the type of two-way play that Herro arguably may never achieve during a career built around streak scoring.

If Oladipo at 30 is as healthy as he is cocksure, there is no reason there can’t be another three or four quality seasons from the No. 2 pick in the 2013 NBA draft.

And two-way components are harder to find than singularly successful sixth men.

Victor Oladipo is about to create what Spoelstra often refers to as good problems, first-world problems, rich-people problems.

He already is being heard.

Next, he awaits to be seen.

THE TUCKER TOUCH: As could be expected, the Philadelphia 76ers are emphasizing the intangibles they expect from free-agent acquisition P.J. Tucker. “P.J. has been around the block,” 76ers assistant coach Dave Joerger said of the former Heat forward to the 76ers’ website. “He’s got veteran–ness to him. He’s got experience to him. And he’s vocal. I think that’s really going to help our locker room. It’s going to help our team continue to grow through the journey of the season.” As with the Heat, the 76ers do not expect (or need) Tucker to lead statistically, instead merely offer the type of toughness that the 76ers lacked in their second-round playoff ouster at the hands of the Heat. “You’re going to see guys now come a little bit out of their shell with their personality — not outside of themselves, but that part of it can come out a little bit more as somebody is kind of out there in front,” Joerger said. “Now we have a catalyst for that and a leader in that area, and I think you’ll see guys’ toughness come out a little bit more than it has in the past.”

BACK AT IT: In the wake of Slovenia’s stunning championship at EuroBasket in 2017, then-Heat guard Goran Dragic viewed it as the perfect moment to step away from international competition. But with Slovenia about to open its defense of that title, Dragic is back on the European stage. The difference, Dragic said, is he now is there to support Dallas Mavericks guard Luka Doncic, who he took under his wing in 2017. “The role will definitely be different,” Dragic, who signed last month with the Chicago Bulls in free agency, told EuroHoops. “I was Batman, but now I’ll be Robin. The most important thing will be to make sure we have good chemistry and be a leader on the court and lift guys up when it’s most difficult.” Dragic, 36, said he was released to rejoin the Slovenian national team by the Bulls only after passing a comprehensive physical, with his brother, Zoran Dragic, also a former Heat guard, providing the impetus. “Zoran was the one who talked all the time about this, every day,” Goran said.

PRECIOUS MOMENTS: As Precious Achiuwa emerged as a multi-position defender and 3-point threat last season, the balance of the Heat’s trade last August for Kyle Lowry could swing in the Toronto Raptors’ long-term favor. At least that’s the perspective offered by trainer Kenneth Miller to Sports Illustrated. “I think kind of after the All-Star break . . . he got a good feeling like, ‘OK, I feel like I can fit here, I belong here,’” Miller said of Achiuwa. “That was a coming-out party for him, and he’s just been building on it ever since.” Among the priorities is working on the finishing skills at the rim that Achiuwa lacked with the Heat after he was selected in the first round of the 2020 NBA draft out of Memphis. “The handle has improved a lot,” Miller said. “Finishing around the rim looks really good, playing off angles and creating his own shot off the dribble.”

NEW VISTA: Having appeared in only 39 NBA games in both 2019-20 and 2020-21, and then only six last season, split evenly between the 76ers and San Antonio Spurs, former Heat guard Tyler Johnson has moved to a contract with the Brisbane Bullets in Australia. He will team there with former NBA center Aron Baynes, his former teammate with the Phoenix Suns. “I have heard so many good things about the NBL,” Johnson, 30, told the league’s website. NBA players who have spent time with Brisbane in recent years include Suns guard Torrey Craig.

0. Games played with the Heat as an emergency COVID call-up last season by Aric Holman, who recently signed to play with Tezenis Verona in Italy. Holman was signed by the Heat last December as a matter of proximity, playing at the time for the San Antonio Spurs’ G League team in Austin, Texas, with the Heat needing to get a player to San Antonio in time for a game that night, a game ultimately postponed due to lack of available players. The power forward who went undrafted out of Mississippi State in 2019 has yet to appear in an NBA game. He was with the Houston Rockets in summer league last month.