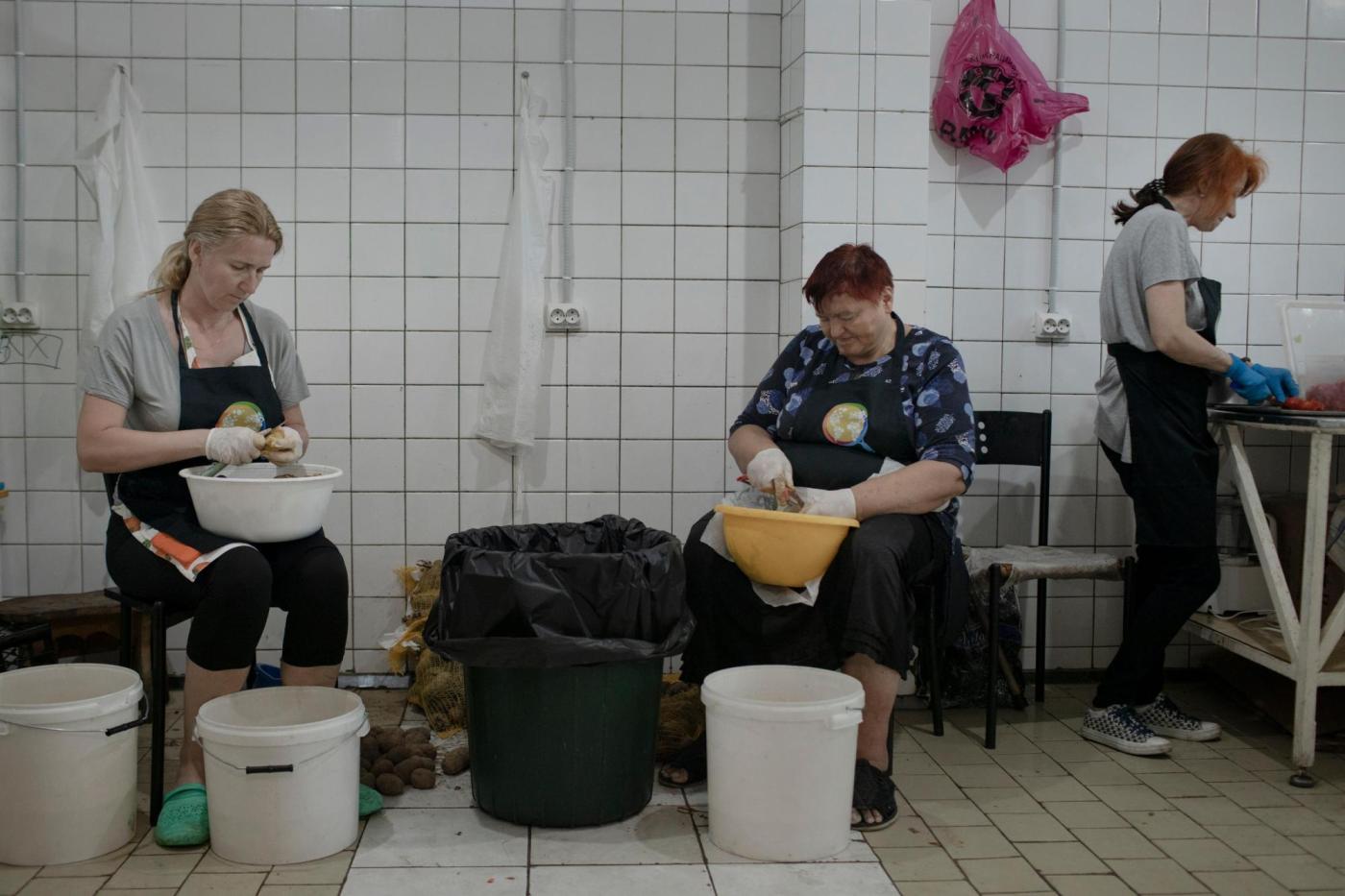 CHERNIHIV, Ukraine — The road to the training site was lined with crumbling homes and damaged buildings, a reminder of how war had consumed the northern Ukrainian city of Chernihiv just months ago.

At the head of the class was a woman named Hanna, along with a board showing images of unexploded munitions and land mines. She explained to the class the risks of minefields and how they are marked. One woman attending the day’s training asked if it was safe to take her 3-year-old son to a local park.

“Don’t walk in the woodland — it’s best not to walk there,” said Hanna, 34, advising her to stay on undisturbed paved areas.

Hanna, who asked that her surname not be used because of fears for her safety, is among a growing number of Ukrainian women who have been trained in demining, which until just a few years ago was on a list of hundreds of jobs women in the country were barred from holding.

Women have become an omnipresent force in Ukraine’s war six months in as they confront long-held stereotypes about their role in the country’s post-Soviet society.

They are increasingly joining the military, including in combat positions, and spearheading volunteer and fundraising efforts. And with men still making up a majority of combatants, women are taking on extra roles in civilian life, running businesses in addition to looking after their families.

Originally from Mariupol, Hanna had joined a Swiss demining foundation there two years ago, and after Russia invaded Ukraine in February, she fled that southern port city and headed north.

Now, she is working in cities like Chernihiv, from which the Russian occupiers have since retreated, to make war-ravaged cities and towns safe from land mines.

“The perception of women, in general, has been very paternalistic,” said Anna Kvit, a Ukrainian sociologist who specializes in gender studies. “With this war that escalated in 2022, the agency of women not only increased, but it also became more visible.”

That shift has been underway for some time, Kvit said, with women increasingly taking on new roles after the 2014 conflict in eastern Ukraine, accelerating changes in the defense and security sectors that filtered out broadly across society. Women had been barred from combat roles, but they were still taking part in the fighting, although without the same status, benefits or recognition as men.

“In Ukrainian society, the resistance was, and probably still is, that the army and war are not a place for women,” Kvit said.

Legislation adopted in 2018 gave Ukrainian women the same legal status as men in the armed forces, and the shift drove a broader push for gender-inclusive labor reforms.

The new laws ended bans on women holding any of 450 occupations in Ukraine, a holdover from the Soviet era, when certain work was considered damaging to reproductive health. In addition to demining roles, that list had included long-haul trucking, welding, firefighting and many security and defense jobs.

Hanna Maliar, Ukraine’s deputy defense minister, said that more than 50,000 women were now in the country’s armed forces, and that the number had risen significantly since the war began. Despite this, the key decision-makers and a majority of the combatants are men, often obscuring the increasingly vital role of women in the conflict, said Jenny Mathers, an expert in security, Russia and gender and conflict at Aberystwyth University in Britain.

“One of the many persistent truths is that women do an awful lot of the unacknowledged but really crucial work,” Mathers said. “War wouldn’t happen without them, and all the things that are going to sustain societies that are in conflict — many of them are done by women.”

Ukrainian women have become the backbone of wide-scale logistics efforts, Mathers said, and are organizing to make camouflage netting for troops, cooking for the millions of internally displaced people and raising money to support soldiers.

With men ages 18 to 60 prohibited from leaving the country so they can fight Russia, women are volunteering to drive transport cars from other countries in Europe for use by Ukraine’s military.

“When the war started, I was just thinking, ‘How can I be helpful?’” said Yevgheniia Ustinova, 39, who is part of one of the countless groups that drive these transport cars to Ukraine.

During a brief stop at a cafe in Lviv, in western Ukraine, she described a two-day round-trip journey into Poland from her home in Kyiv, the Ukrainian capital, to pick up a truck and then return to Ukraine.

“Everyone is doing what he or she can do,” she said.

The female drivers have been well received, said Maria Stetsiuk, 35, who was passing through Lviv last month while driving east, where she planned to drop a truck off with friends in the military. But occasionally there are skeptics, like the police officer who stopped her on the way into Dnipro recently and asked her why she was driving and why she did not have a husband.

“I never thought I’d be doing something like this,” Stetsiuk said. “But nowadays everyone is doing what he or she can.” These informal networks will be essential if peace returns, and they could play a vital role in rebuilding Ukraine, said Andrea Ellner, an expert in gender and war at King’s College London.

But she warned that stereotypes about women could “stand in the way” of female progress in a postwar Ukraine and obscure “how important they are.”

As the war has upended their lives, some Ukrainian women said they were confronting their own stereotypes about gender roles.

Yulia Maleks, 36, bought a small farm outside Lviv with her husband four years ago, and said she never imagined she would be trying to keep it afloat alone. Her husband had tried to spare her from doing the hard labor, she said, while she focused on building a small dairy business.

But then the war began, and he volunteered for a local defense unit, leaving Maleks to work the farm alone.

“I’ve learned to do many things myself,” she said, like stocking the wooden stove they use to heat the house and trimming the animals’ hooves. Each morning she rises at dawn to feed her goats and sheep, lugging feed and water buckets across the farm.

“My husband used to not let me carry the heavy stuff,” Maleks said.

While the war has challenged perceptions about gender and broadened some opportunities for women, it has also had a disproportionate, brutal effect on their lives. Though they tend not to die in combat, they are among those most affected by displacement, and an analysis by U.N. Women and CARE International said the war had increased their care burden significantly and worsened gender inequalities, something that worries experts.

Yuliia Serdiuk, 31, was severely injured in shelling weeks ago in her hometown, Orikhiv, in Ukraine’s southeastern Zaporizhzhia region, when the once sleepy town found itself on the front line as Ukrainian forces tried to push back Russian troops. On May 8, her son had asked her to hold his hand as he rode his skateboard down a hill.

“Suddenly, there was an explosion,” she said. “We started running.” She shielded her son with her body. Fragments hit her rib and liver, and severed much of her spinal column. She can no longer walk and was evacuated by train to a hospital in Lviv, where she is undergoing intensive rehabilitation.

There, on a recent afternoon, a doctor helped her into a wheelchair and took her to physical therapy. Bruises are still visible, peeking out from under her T-shirt.

Serdiuk wants to return home, even though her town has been devastated. Her son’s school is gone, the downtown demolished. She is hoping to be transferred outside Ukraine for more advanced care.

Her mother, Nataliia Budovska, 51, has been with her daughter throughout her recovery and said it was difficult to see her suffering.

“It is like cutting my heart into pieces,” she said. “For people who don’t have war at their doorstep, it may seem like this is made up. But it’s true — this is reality.”

This article originally appeared in The New York Times.