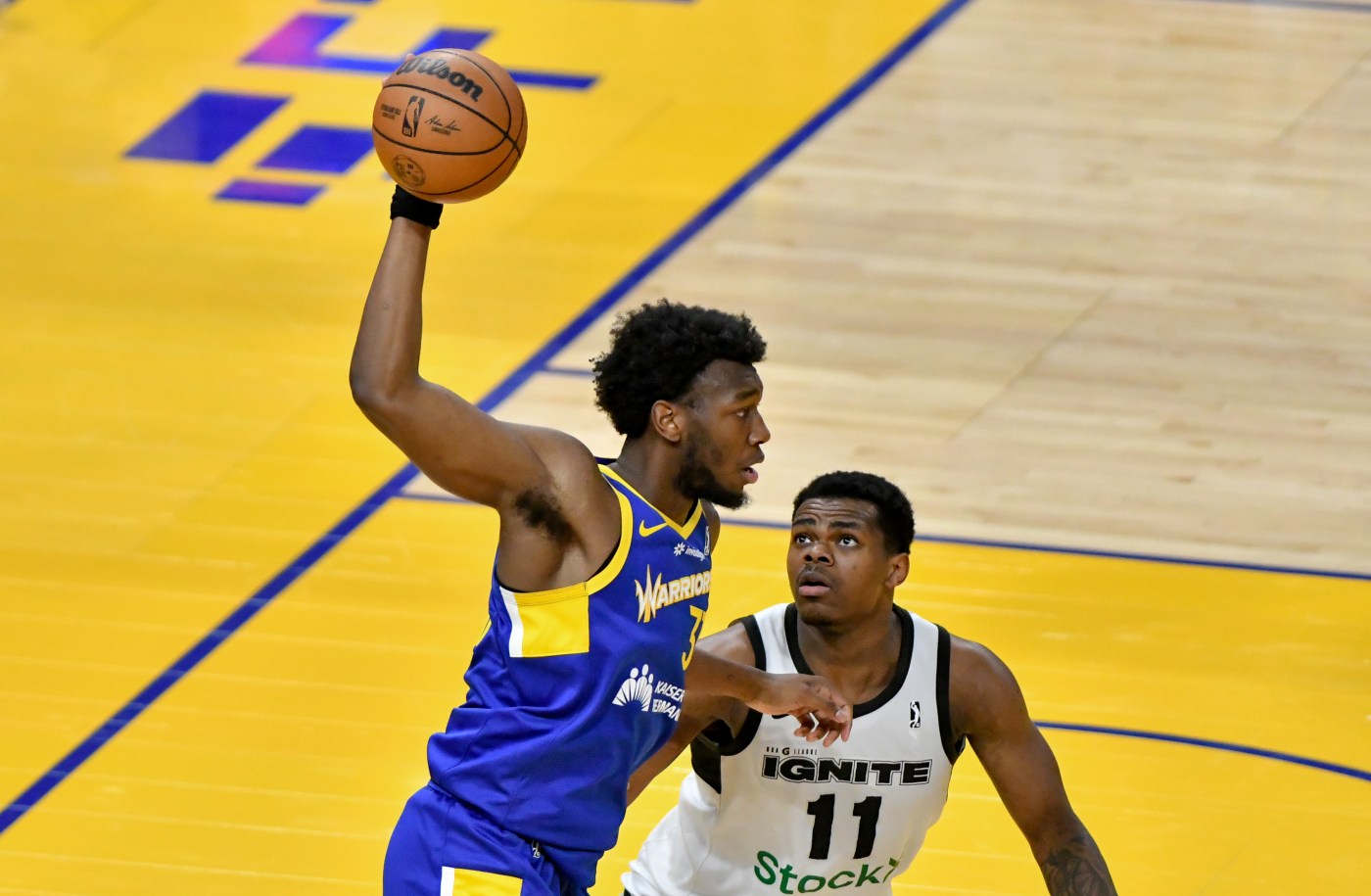 LAS VEGAS — James Wiseman made a statement in the opening minutes of his 2022 Summer League debut Sunday.

The former No. 2 pick threw down a ferocious alley-oop dunk with the help of Jonathan Kuminga in the team’s first possession. He then got a block, his first of two in his opening four minutes, and drained a shot from 3-point land as he scored the Warriors first five points.

Wiseman was far from perfect in the Warriors’ 86-85 win over the San Antonio Spurs. But in his first game since he played three G League games in March before being shut down for the season, the 7-foot center showed flashes of his athleticism and skills that fueled the Warriors to use their top draft pick in 25 years. He hit a smooth turnaround fadeaway over a Spurs defender in the second quarter but went quiet for parts of the second half.

Wiseman finished with 11 points and two rebounds but had three turnovers and seven fouls in an up-and-down 19 minutes.

Still, Sunday was Wiseman’s long-awaited return to the court after a lengthy and, at times, aggravating 15-month rehabilitation process.

Wiseman’s rookie season came to an end in April 2021 after he underwent surgery to repair a torn meniscus in his right knee. He was expected to return by training camp last fall but experienced several setbacks, one which required a second procedure to clean up his knee in December.

Wiseman, 21, appeared to be on the mend this spring, even being cleared to play in three games with the Santa Cruz Warriors, during which he put on mixed performances. But when swelling flared up in his surgically repaired knee, the Warriors training staff decided to shut him down for the rest of the season.

In April, he went to London with general manager Bob Myers and received an orthobiologic injection designed to promote healing throughout his body.

But those hard days appear to be behind Wiseman.

Before Sunday’s game, Wiseman beamed with excitement to finally have a date set to play in a game in front of fans after playing in closed five-on-five scrimmages at practices in recent weeks.

“I’ve been through a lot so to go out there and just play competitively again and have fun, I cannot wait for that,” he said.

Two days after Kuminga missed all four of his 3-pointers and finished with four points and only two rebounds in 24 minutes, the 19-year-old bounced back with a 26-point performance in Sunday’s win.

Kuminga still exhibited some rust after taking nearly three weeks off following the NBA Finals in what was an up-and-down performance from the world champion. He missed a slam dunk attempt in the first quarter and then got called for a charge on his next possession.

He led the team in points (26) and rebounds (seven), but he missed six of his seven attempts from beyond the arc. Kuminga also had five turnovers and missed 11 of his 18 free throws.

Meanwhile, Moses Moody had the night off Sunday after an explosive 34-point performance in Friday’s loss. In an interview on NBA TV, Moody said he had some “medical things I need to check up on.”

Mac McClung shined in his second game for the Warriors after an impressive debut Friday. The flashy playmaker and crafty scorer had several highlight reel-worthy plays, including a behind-the-back pass to Jarrod Uthoff for a dunk in the first half.

McClung scored 22 points on 9-of-15 shooting. He also had six assists and six rebounds.

The Warriors picked up McClung from the Lakers to temporarily replace second-round selection Ryan Rollins, who’ll miss all of Summer League with a stress fracture in his foot. McClung is coming off a Rookie of the Year campaign with the G League, where he averaged 21.6 points, 7.5 assists and 6.9 rebounds.