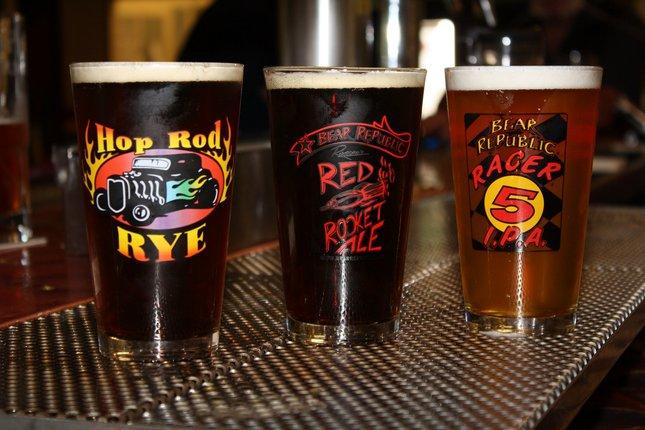 As I travel not only the length of the Golden State but the world — tasting great beer as I go — I’m seeing more and more West Coast IPAs on tap handles and in cans
and bottles.

Hazy IPAs are hardly going away, but I think there may be a rebalancing unfolding, a swing back to a time when there was more diversity in your beer choices. Even if that means only having two kinds of IPA instead of one, it’s progress as far as I’m concerned. Anything that increases the selection as I belly up to the bar is a welcome development.

To be fair, here in California, American — or West Coast — IPA never truly went away. It just receded into the background as juicy or hazy IPAs caught the limelight. I have nothing against a good hazy IPA, but I’m a bit old school. To me, an IPA ought to be bitter. That’s its defining characteristic.

The style likely got its start in 1975, when Fritz Maytag took an essentially English pale ale and used decidedly American Cascade hops to create Liberty Ale, released to commemorate the 200th anniversary of Paul Revere’s  famous ride. Others
followed suit —Sierra Nevada Pale Ale, which debuted in 1980, is the most famous example. And many American brewers decided, if bitter was good, more bitter must be even better.

When Lagunitas founder Tony Magee noticed people were ordering the style rather than the brand, he launched his hoppier-than-pale-ale beer in 1995, he branded it with a simple, large “IPA” on the label and a much smaller “Lagunitas” above it. The gambit worked, and the beer took off, especially in the Bay Area. It wasn’t the first IPA, but it surely helped spread the style.

Some of the earliest IPAs include Blind Pig, brewed by Vinnie Cilurzo in 1994, when he was at his first brewery, Temecula’s Blind Pig Brewing, years before Russian River Brewing. Others examples are Pizza Port and Stone, both in San Diego, and Rubicon, in
Sacramento.

By 2000, it was hard to find a brewery that wasn’t making an IPA. In 2005, Chuck Silva created an American IPA for San Diego’s Green Flash Brewing which they called West Coast IPA, trademarking the name. It launched their beer and the name nationwide.

Soon, though, the nation’s brewers and beer lovers were gripped by hazy fever. I think its popularity really hit me at Spain’s Barcelona Beer Festival in 2018. One of the brewers I met there revealed he made only one kind of beer, releasing a new hazy IPA every few weeks. That was it. Nothing else. He did not like those old-fashioned, traditional beers, he said.

What made West Coast IPA possible was hops — both the quantity and the kind. The Cascade hops that became the signature of both Liberty Ale and Sierra Nevada Pale Ale was only released in 1972. Other varieties common in early American IPAs are even newer, including Comet (1974), Chinook (1985), Centennial (1990), Tomahawk or CTZ (1990) and Crystal (1993). The explosion of hop varieties followed soon afterward. Some of those now-common hops that give IPAs their signature aromas and flavors include
Amarillo (1998), Simcoe (2000), Citra (2008) and Mosaic (2012).

The availability of those and other hop varieties led to West Coast IPAs described as dank, with aromas and flavors that included pine, citrus, onions, garlic and other strong characteristics. It’s not hard to see how that might have led to a backlash that saw softer, juicier and far less bitter beers emerge — hazy or juicy IPAs.

But taste buds and trends tend to go in cycles. Everywhere I go now, I’m seeing more West Coast IPAs. Many older breweries that were known for their West Coast IPAs have been experimenting and tweaking their beers using new hops or techniques for some truly great, new hop-forward IPAs. Keep an eye out for Russian River’s Hopfather, Firestone
Walker’s Hopnosis IPA and AleSmith’s Party Tricks. Meanwhile, stalwarts such as the classic Bear Republic Racer 5, Ballast Point Sculpin and Bell’s Two-Hearted — the Michigan brewery has just started expanding sales into Northern California — are still tasting great.

Welcome back to the bitter side.

For more food and drink coverage
follow us on Flipboard.