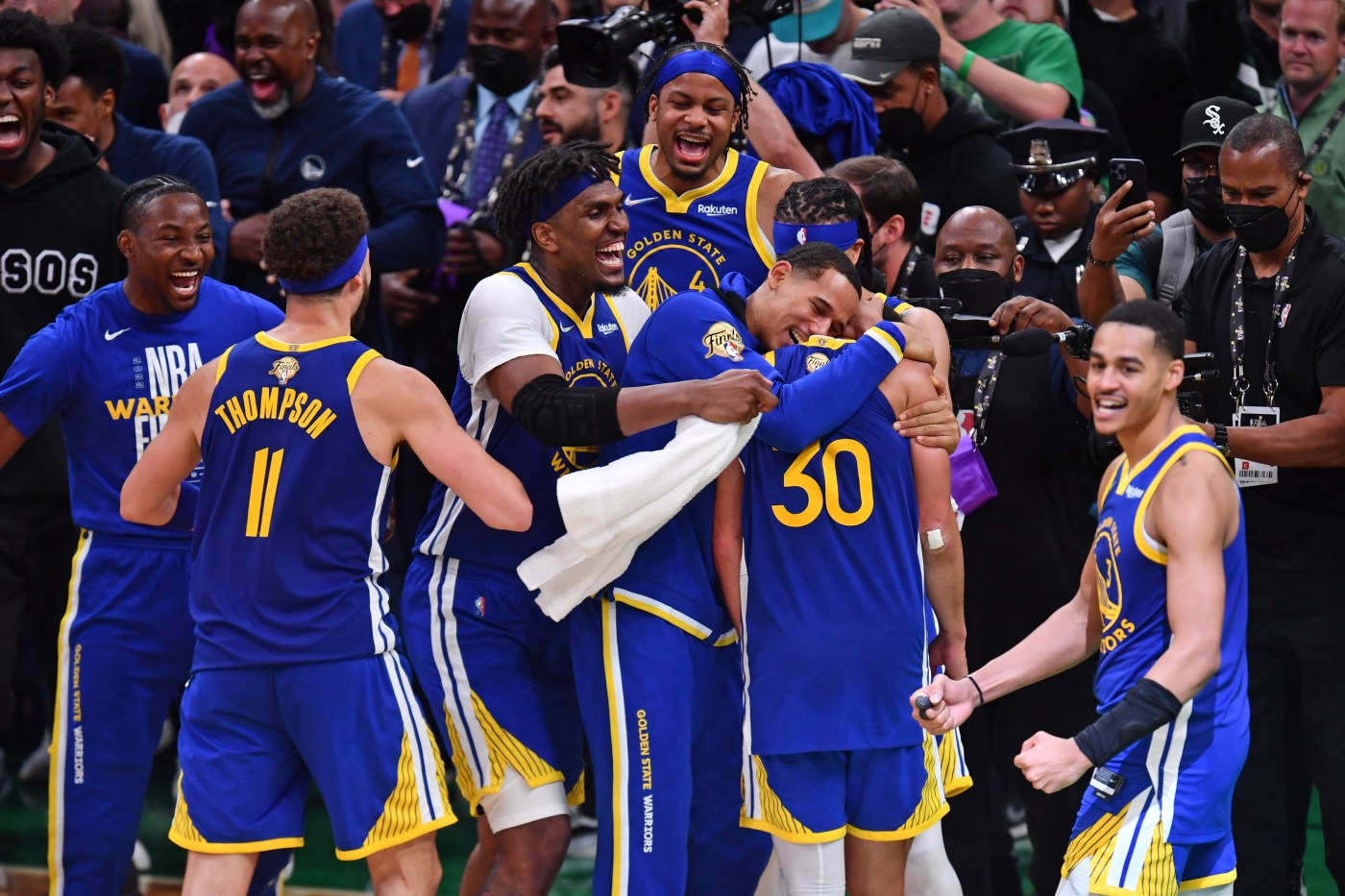 Does the phrase ever get tired to read, or to say?

Clearly, it doesn’t for the core trio of Steph Curry, Klay Thompson and Draymond Green, who have now led Golden State to four titles in eight years. They capped off the title run with a 103-90 win in Game 6 over the Celtics, clinching the crown on the parquet floor in Boston on Thursday night.

Curry had his coronation on Thursday night, scoring 34 points on 12-of-21 shooting — and 6-for-11 from 3-point range, one game after he didn’t make a 3-pointer for the first time in his postseason career. He also added seven rebounds, seven assists, two steals and a block, too. He received the Finals MVP trophy, to the surprise of no one.

The Warriors also got vital contributions from Andrew Wiggins (18 points, six rebounds, five assists, four steals and three blocks), Jordan Poole (15 points on 12 shots in 18 minutes) and Gary Payton II (six points, three steals, three rebounds and a team-high plus-18) on Thursday night, and those three — and others — were rewarded with their first NBA title.

There’s more to come ahead, and the title chase for a fifth — “One for the thumb” like the 49ers were going for back in 1990, anyone? — will surely start up soon. But for now, it’s party time.

Here’s what the Warriors were saying after clinching the title:

First, I want to say congrats to the Celtics on a great series. They were incredible. Their defensive athleticism, length, toughness, was really tough to overcome, and they had us on the ropes in this series, and a tremendous season. You know, since I’ve been here, we’ve lost in the Finals twice, and it’s devastating, you know, to get this far and to come up short, and I’ve got a lot of friends across that hall, you know, between Ime and Will Hardy, Damon Stoudamire, Aaron Miles, a bunch of really good friends and guys I’ve coached in FIBA, Jayson Tatum, Jaylen Brown, Derrick White, great, great, group of guys. So I genuinely feel for them because I know what it’s like to lose at this point, but they had an amazing run and it was a great, great series.

On what separates this championship from others:

Well, they are all unique, they are all special. I think this one may have been the most unlikely just from the standpoint of where we’ve been the last couple years. A lot of unknowns, the injury to Klay, Draymond at the end of the year, Steph at the end of the year. A lot of young guys, a new core, or a new group around our core, I should say. But it’s really special to see guys like Wiggs and Loon and Gary Payton, just how far they have come, the impact they made, Jordan Poole, the same thing. I know I’m going to forget people but it takes a full team effort to do this, and we just had a great group who do get it done.

He does, because what he does at his size is so different from the traditional greats in this league. I’ve said it so many times, Steph reminds me so much of Tim Duncan. Totally different players. But from a humanity standpoint, talent standpoint, humility, confidence, this wonderful combination that just makes everybody want to win for him. And I’m obviously thrilled for everyone in that room, and a lot of people had a big hand in this, but I think the thing with Steph is, you know, without him, none of this happens. That’s not taking anything away from Joe and Peter’s ownership, because they have built an incredible organization. Bob Myers, hell of a GM. Our players, we have had so many great players, but Steph ultimately is why this run has happened. Much like Timmy in San Antonio. So I’m happy for everybody, but I’m thrilled for Steph. To me this is his crowning achievement in what’s already been an incredible career.

On if Finals MVP was last thing for Curry to accomplish:

No, he’s missing an Olympic Gold Medal [laughter], and I think he really has to focus on being on the 2024 Olympic Team. That’s the last thing for his career. Sorry, I couldn’t resist. Honestly, the whole Finals MVP thing, it’s like, I mean, are we really — I guess his career has been so impeccable, and that’s the only thing we can actually find. So it’s great to check that box for him. But it’s been really hard for me to think that that’s actually been held against him. Anyway, here he comes. Talk to him.

On what it means to be Finals MVP:

Forget that question. Why you start with that question? We’ve got four championships. God is great, the ability to be on this stage and play with amazing teammates against a great Boston Celtics team that gave us everything to try to get to the finish line. This one hits different for sure, just knowing what the last three years have meant, what it’s been like from injuries to changing of the guard in the rosters, Wiggs coming through, our young guys carrying the belief that we could get back to this stage and win, even if it didn’t make sense to anybody when we said it, all that stuff matters. And now we got four championships. Me, Dray, Klay, and Andre, we finally got that bad boy. It’s special. It’s special. Just all the work that went into it, the faith and belief and everybody in that locker room that’s getting to spray champagne around the locker room, everybody mattered in that process. So I’m just proud of everybody.

On what he was thinking in final moments of the game:

These last two months of the playoffs, these last three years, this last 48 hours, every bit of it has been an emotional roller coaster on and off the floor; and you’re carrying all of that on a daily basis to try to realize a dream and a goal like we did tonight. And you get goosebumps just thinking about, you know, all those snapshots and episodes that we went through to get back here, individually, collectively. And that’s why I said I think this championship hits different. That’s why I have so many emotions, and still will, just because of what it took to get back here. And the fact that when we started this season, the conversations about who we were as a team and what we were capable of, clearly remember some experts and talking heads putting up the big zero of how many championships we would have going forward because of everything that we went through. So we hear all that, and you carry it all and you try to maintain your purpose, not let it distract you, but you carry that weight and to get here, it all comes out. It’s special.

On what happened when he hugged his dad:

I blacked out for a second.

On the emotions of winning and tearing up:

It was definitely overwhelming. It was surreal because you know how much you went through to get back to this stage, and nobody, unless you’ve been on that floor, you just grind day-in and day-out. Talking about just me personally, my workouts from the off-season last year when we lost in the play-in tournament, it’s been a year and six days that I started the process of getting ready for this season. It all paid off. Didn’t know how it was going to happen. Didn’t know what the environment was going to be like. You imagine what the emotions are going to be like, but it hits different. You know, out there on the floor, I didn’t even know he was down there, to be honest with you. I saw him and I lost it, and I knew the clock was kind of running out. I just wanted to take in the moment because it was that special.