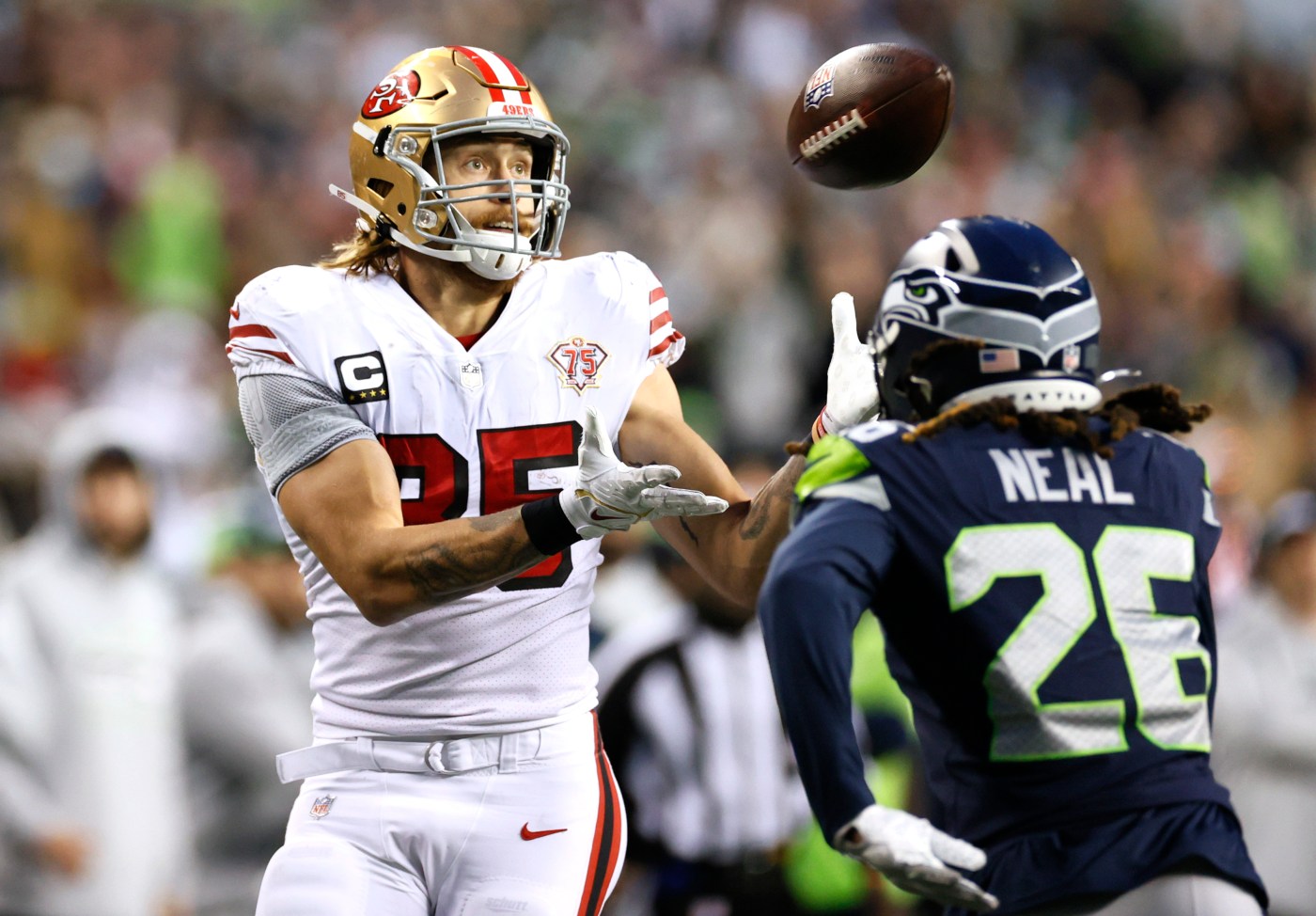 SANTA CLARA — Tight end George Kittle is expected to be out for the 49ers’ home opener today, according to an overnight report by ESPN. That would extinguish any hope of him making his season debut against the Seattle Seahawks, after returning to practice Friday.

Kittle was listed as questionable Friday, as was the case last week when his groin injury scratched him from the season-opening, 19-10 loss at rain-soaked Chicago.

Kittle’s official status and the 49ers’ inactive list will be revealed 90 minutes before kickoff, which is set for 1:05 p.m. The NFL Network reported Sunday morning that Kittle was originally diagnosed with a “three-week injury,” but was “pushing to play” and the 49ers would make him a game-time decision.

“Definitely a very frustrating start to my season,” Kittle told his father, Bruce, on the Hidden Pearls Podcast that posted on YouTube this morning. “You never like missing games, especially with something like that (injury). But I bounced back very well, excited to be back on the football field. Feeling much better than I was 10 days ago.”

The 49ers are 2-8 in the past 10 games Kittle has missed. Tyler Kroft started in place of Kittle at Chicago and played 37 of 68 offensive snaps. Backups Ross Dwelley and Charlie Woerner each played 19 snaps.

Kittle, a five-time captain, hurt his groin in a Sept. 5 practice. He did not speak with reporters following Friday’s return to practice. On his father’s podcast after Saturday’s practice, Kittle shared that he’s trying to encourage his younger teammates.

“One thing I learned from Bruce is: if you have fun, it makes things a lot easier out there,” Kittle said. “I just try to continue to encourage them, keep the energy high, and remind them to be very angry and violent (today).”

What else is in store for the Seahawks? “Big fan of the game plan this week and there’s a lot to build off of,” Kittle added. “It’s going to be a great one. While it will probably be wet, it won’t be monsooning like it was last week. The boys are ready to go and hit again.”

Unlike a week ago at Soldier Field, the field is not covered by a tarp nor is their a deluge or rain water ponding. That should allow for routine pregame warmups, although gusty winds and light showers are coming to fruition.

Today’s forecast from the National Weather Service: “Rain, with thunderstorms also possible after 2pm. High near 68. South southeast wind 11 to 14 mph, with gusts as high as 29 mph. Chance of precipitation is 90%. New rainfall amounts between a tenth and quarter of an inch, except higher amounts possible in thunderstorms.”

Defensive end Nick Bosa revealed Friday that he’s been assigned a team address following their day-before-game practices. He picked an appropriate topic ahead of this home opener: the 49ers’ lopsided rivalry with the Seahawks.

“It’s crazy. Nick bosa said it (Saturday): ‘In the last 20 matchups, the Niners have won only three times’ ” Kittle shared on his dad’s podcast. “That’s not good. It’s painful, and I know Niners fans feel that, Niners players feel that, the franchise feels that.

“There’s going to be an angry and intensity come (today).”

Not only have the Seahawks won all but three meetings the past decade, they’ve lost only once at Levi’s Stadium since it opened in 2014, with that exception coming in a 2018 overtime affair.

Veteran running back Marlon Mack won’t make his 49ers debut today, after being signed to the practice squad on Wednesday in the wake of Elijah Mitchell’s knee sprain in the opener. Mack, nor any other practice-squad player, was promoted on Saturday.

Malik Turner’s special-teams prowess got him promoted from the practice squad last week, but not this game. That could be a sign that rookie Danny Gray makes his NFL debut as the No. 5 wide receiver, or he could be among the 49ers’ seven inactive. Stay tuned.

On ESPN’s “Sunday NFL Countdown,” former NFL linebacker and Rosevill High product Tedy Bruschi said: “When it comes to Trey Lance, how long is the leash? If I’m a defender on the team and I see Trey Lance continue to struggle, and I know Jimmy (Garoppolo) is right there, it’s like, ‘I don’t get many chances to win in this league. What are we going to do?’

“He’s young. Do we make excuses for him? He’s learning as he goes. But more and more, as defenders watch Trey Lance, they learn about him. What did we learn vs. Chicago? Ask (Bears safety) Eddie Jackson. It gets to the fourth quarter and, ‘I know you’re staring down this receiver. I know I can bait you and I know that delivery is a little more looping and I can be aggressive to make the pick.’

“That information is becoming available to us defenders, as we see a quarterback that’s not sure, that’s unsettled at times, and when you’re like that, you stare and then you stare and you have that looping ability.”

Former NFL coach Rex Ryan chimes in: “That’s why guys with those long deliveries don’t make it in the nFL. He needs to become a veteran quick, because you have to look off DBs and understand you are slow to deliver the football. Man, there are some problems. If Jimmy G were healthy, we all know he probably would have taken the job. … They have to ride this Trey Lance as long as he can. One way to do that is to run the football.”