What’s next for ASU after the doomed experiment 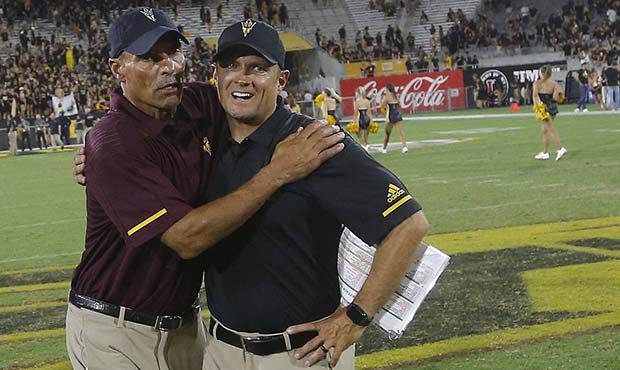 Arizona State announced Sunday that it has parted ways with coach Herm Edwards. Officially, the university explained that Edwards would “relinquish” his duties, but the framing is meaningless.

The move comes one day after an abysmal loss to Eastern Michigan, 15 months after the start of a major recruiting scandal and almost five years after Edwards was hired away from his ESPN gig by a longtime friend to reinvent college football and take ASU to unseen heights.

If ever a hire was doomed from the start, this was it.

The Edwards era ended Sunday with the program no better off than it was when Edwards arrived. His record in conference play over four seasons was 17-14, with no division titles. His predecessor, Todd Graham, had a 31-23 conference record over six years, with one division title.

Off the field, the program is in much worse shape than it was when Edwards took over in Dec. ’17.

The recruiting scandal, which allegedly included flouting COVID policies and protocols, is expected to result in serious penalties for the Sun Devils and could impact their candidate pool during the search for Edwards’ successor.

— That said, we should acknowledge a vital role Edwards played in the machinery of college football.

During an era when head coaches look for every opportunity to control their surroundings and the public narrative, Edwards was open with the media. Not only that, he allowed his assistants and coordinators to speak to the press with a frequency rarely found in the sport.

College football has a pipeline problem: There are simply not enough Black assistant coaches and coordinators on the  fast track to becoming head coaches.

One reason for the clogged pipeline is that staffers at many schools are sheltered from the media by the control freaks who run the programs.

As a result, the assistants and coordinators don’t become comfortable with the public-facing aspects of the job — aspects that are critical to the interview process and moving onto the fast track for head coaching jobs.

Edwards saw that and did his part to better the situation. The sport needs dozens of coaches to adopt his philosophy in that regard.

But what if ASU had made a play or two down the stretch and beaten Eastern Michigan on a last-second field goal?

Probably not, which cuts to the heart of the bizarre relationship between Edwards, Anderson and Crow: Performance seemed to matter more than the conduct of the football program.

How else should we read a situation in which half the coaching staff is terminated for ethical violations committed under Edwards’ watch, but the man responsible remains in place. Accountability seemed irrelevant.

But then he lost to EMU.

— The Edwards experiment was truly something to behold.

Together, they decided to unveil the New Leadership Model, which purported to break new ground in the way college football programs operate by placing the head coach in a CEO role.

The details were provided in a press release that could have been written in a business school class and seemed to suggest ASU, and ASU alone, had found a better way.

Meanwhile, everyone in the sport knew the New Leadership Model was destined to fail — only the specifics were up for debate.

Those specifics turned out to be a major recruiting scandal that embarrassed the school, derailed the program and created the circumstances for the on-field play to deteriorate — thereby resulting in Edwards’ termination and the ascent of its arch-rival.

The scandal in Tempe so impacted recruiting that it gave Arizona access to prospects who might not have considered the Wildcats if ASU had been a viable option.

Essentially, the scandal ruined one program and uplifted another.

Our advice to ASU moving forward: Don’t try to be smarter than anyone else; just hire a good football coach who has actually, you know, coached college football.

You don’t have to hire another Edwards, or a Lincoln Riley or a Dan Lanning. A Kalen DeBoer will do just fine.

Of course, the NCAA sanctions could limit the candidate pool. But that’s a topic for another day.

— Right now, the critical question isn’t who the Sun Devils will hire but, rather, who will actually make the hire.

Will the university allow Anderson, who staked everything on Edwards, be given a second chance?

Will Crow give the architect of this mess the opportunity to make another — or to make amends?

The statement released Sunday by Anderson, who’s under contract until 2026, hinted at the realization of an experiment gone wrong:

“At the core of this is doing what is best for our current team, staff and university. I understand the frustrations out there. We must do better and that starts with our decision today.”

For the sake of all the frustrated ASU fans who continue to support the program, let’s hope the administration has  learned its lesson and approaches the hiring process with open eyes, low egos and a willingness to embrace the mundane.

For Crow, that would be an innovative way to go.