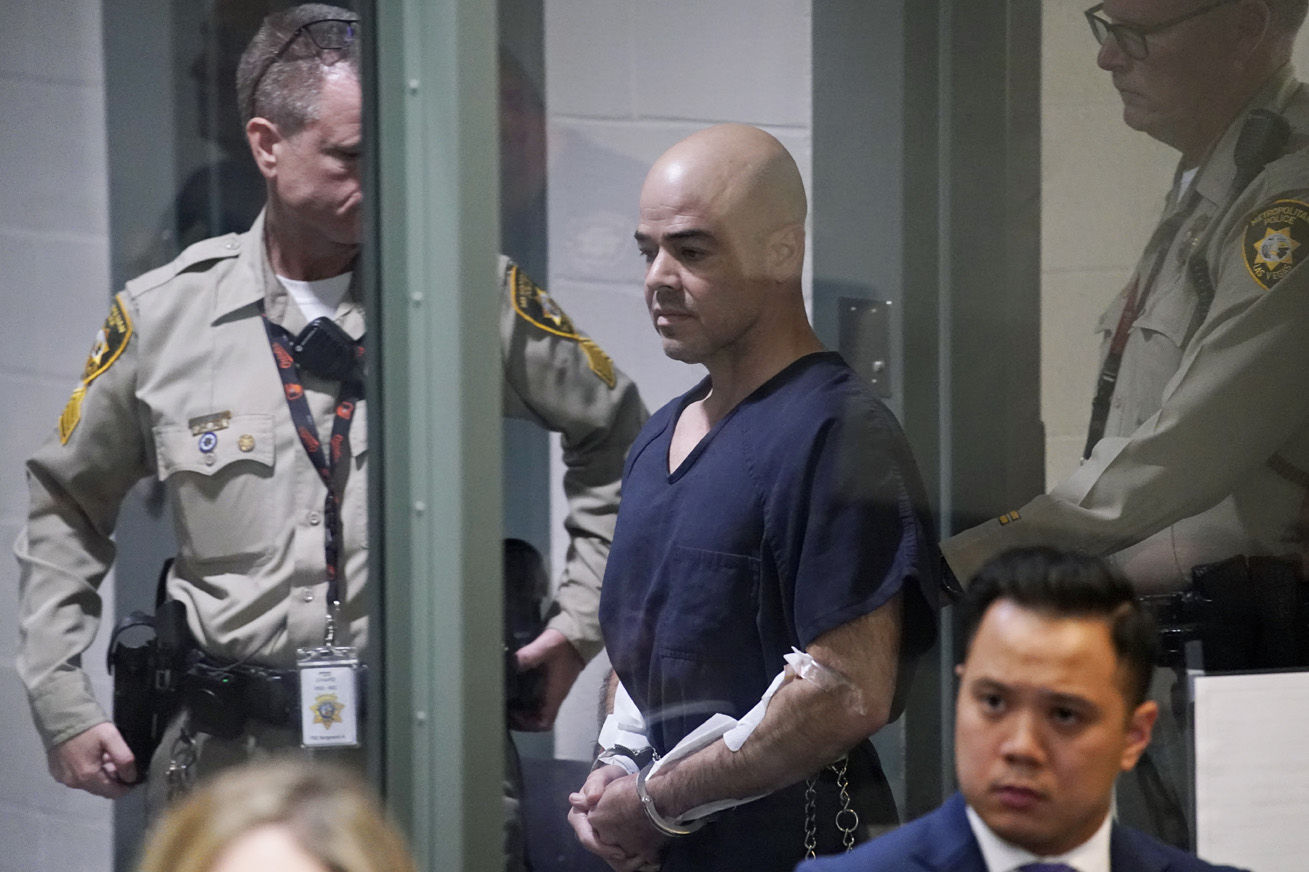 (CNN) — The Las Vegas investigative journalist who was stabbed to death last week had the alleged killer’s DNA underneath his fingernails, a prosecutor and a judge said Thursday at the accused man’s initial court appearance.

As more details became known in a chilling case that has raised concerns about press freedoms in America, the district attorney also spoke publicly of his decision to release the suspect, Clark County Public Administrator Robert Telles, for several hours on Wednesday.

After police officers had searched his home and towed away two vehicles, Telles returned around 2:30 p.m. wearing what seemed to be a white hazmat jumpsuit. He ignored reporters’ questions and went in through the garage.

Robert Telles just arrived at his house. Reporters asked him if he had any comment. I asked why police towed his vehicle. He had no comment. Story: https://t.co/3CSa7B4XeS pic.twitter.com/tgQ7JuI9BX

On Thursday, District Attorney Steve Wolfson told reporters that Telles’ clothes were confiscated during an interview with police investigators. They then let him go. “At that time,” Wolfson said, “we felt that there was not sufficient evidence to continue to detain him, so we allowed for his release knowing the evidence was literally being developed minute by minute.”

Shortly afterward, he said, they got the DNA evidence, and officers returned to Telles’ home around 4:15 p.m. He refused to come out of the house and threatened to kill himself. A SWAT team was called in to get Telles. He was removed on a stretcher and taken to a hospital for treatment of superficial cuts on his arms. Police records say Telles also claimed to have swallowed pills.

On Thursday, Telles was denied bail at a court appearance where prosecutor Richard Scow revealed Las Vegas Review-Journal reporter German had been stabbed seven times and allegedly had Telles’ DNA under his fingernails.

Justice of the Peace Elana Lee Graham called the DNA detail “quite chilling.”

“The DNA is alleged to have been recovered from the hand of the victim, presumably during the time in which he was fighting for his life,” Graham said, adding that a report showed German had several defensive wounds on his hands and arms.

Telles was represented by a public defender who said he was reserving his response to the prosecution’s allegations until the defendant’s next court appearance, scheduled for Tuesday.

German was discovered outside his home Saturday morning, though police believe the killing occurred a day prior.

According to Dori Koren,  captain of the Metropolitan Police Department’s homicide bureau, the killer is thought to have approached  the side of German’s home around 11:15 a.m. Friday, Sept. 2. German came outside soon after and went to the side of the home, where investigators believe he was stabbed multiple times.

Telles was identified as a person of interest early in the investigation, as authorities discovered surveillance video showing a sport-utility vehicle that matched one registered to Telles’ wife.

“We ultimately developed video evidence to show that the vehicle, the GMC Yukon Denali parked in front of Telles’ home, departed around 9 a.m. in the morning on the day of the murder, and returned around 12 p.m., just after the murder, which matched our timeline,” Koren said.

Surveillance video released over the weekend also showed a suspect whose face was concealed by a wide-brimmed straw hat. During the search of Telles’ home, investigators found pieces of that type of hat, which apparently had been cut up.

Investigators also discovered blood on a pair of shoes that had been cut, “likely in a manner to try to destroy evidence,” Koren said.

Telles, 45, had been the subject of four articles  by German in May and June that detailed accusations of a hostile work environment in the public administrator’s office and his allegedly inappropriate relationship with a staff member. In the June 14 Democratic primary, Telles was defeated by his top deputy in the office.

German was continuing to investigate the case, the Review-Journal said, and shortly before his death had put in a public records request seeking official communications between Telles and the man who had been hired by the county to look into the complaints about the office, which handles property of people who die without a will or family contacts.

“The safety of our county employees and the public is our top priority, and the county has suspended Mr. Telles’ access to county offices or property,” officials said.

Before German’s death, Telles published several online posts detailing his issues with the journalist’s reporting, including on his campaign’s website. A tweet on June 18, several days before he conceded the primary, said: “Looking forward to lying smear piece #4 by @JGermanRJ. #onetrickpony I think he’s mad that I haven’t crawled into a hole and died.”

Koren said that the homicide investigators, in addition to considering the possibility of a burglary, had looked into “any work-related grievances or conflicts” related to his reporting.

The Review-Journal was instrumental in providing information that helped investigators, Sheriff Joe Lombardo said Thursday, particularly in outlining what articles German “was working previously and currently.”

Telles’ campaign website describes him as “a family man with a beautiful, intelligent wife and three usually wonderful children.” He has been married since 2010 to Mae Ismael, a project management consultant who received her undergraduate degree from San Francisco State University.