Umpires were attacked with scissors and projectiles and a bush footy team was forced to barricade themselves in a locker room after violent spectators flooded the field in a Northern Territory AFL grand final last Saturday.

There was already bad blood between the Katherine Camels and the Ngukurr Bulldogs in the BFRL competition after an all-in melee in a clash weeks before.

Following the siren in their grand final – won by the Camels 14.9 (93) to 7.22 (64) – unruly spectators stormed the field and forced the players and umpires to flee.

One umpire was injured and three people were arrested and later issued with infringement notices for disorderly behaviour in a public place.

‘Unfortunately there’s a little bit of bad blood … this is unfortunate for the Camels – they deserve better than this,’ a livestream commentator said as the incident occurred.

The Katherine Camels issued a statement following the event to confirm all of their players were safe after the attack.

‘Apologies to those watching at the ground & at home that saw the disgraceful behaviour and physical abuse post game with fists and weapons of our players, the umpires and the spectators tonight, everyone is safe,’ the statement read. 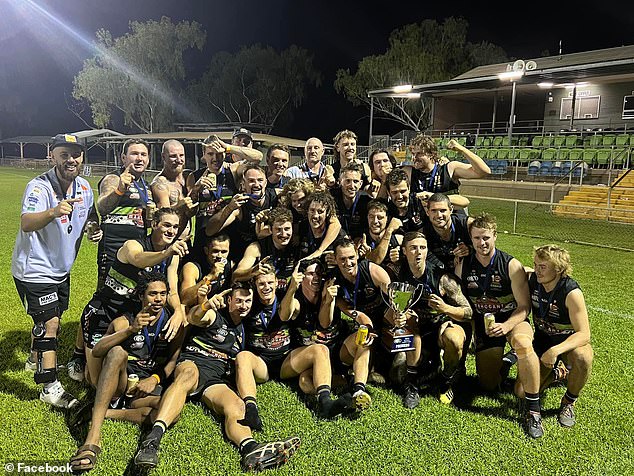 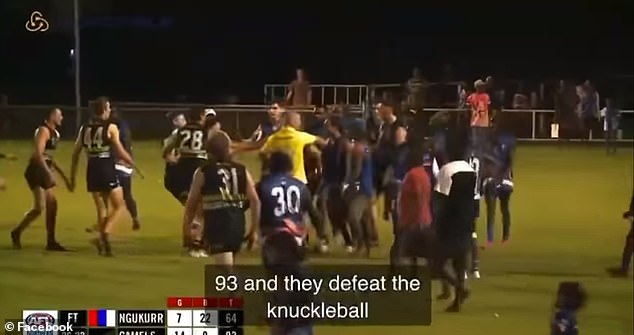 Players tried to protect the umpires in scary scenes where spectators ran onto the field and attacked them with scissors, bottles and cans

Camels president Tim Delaney told the ABC that the situation escalated rapidly after the siren.

‘There was a bit of push and shove at the end of the game and then the crowd came running on, throwing stuff,’ he said.

‘A couple of the boys said they got chased with scissors and knives.

‘It got scary fast.’

Camels coach Mark Tyrrell told the NT News that his side was warned prior to the match to have an exit strategy in case tensions flared.

‘We were told, “Be ready, if they lose you guys have to have an exit strategy of what you’re going to do after the game”,’ he said.

‘We told our guys, if anything looks like it’s going to go pear shaped just get off, don’t retaliate, just go.

‘The worst thing we probably did was start running … then they started chasing and that’s when it just exploded.’ 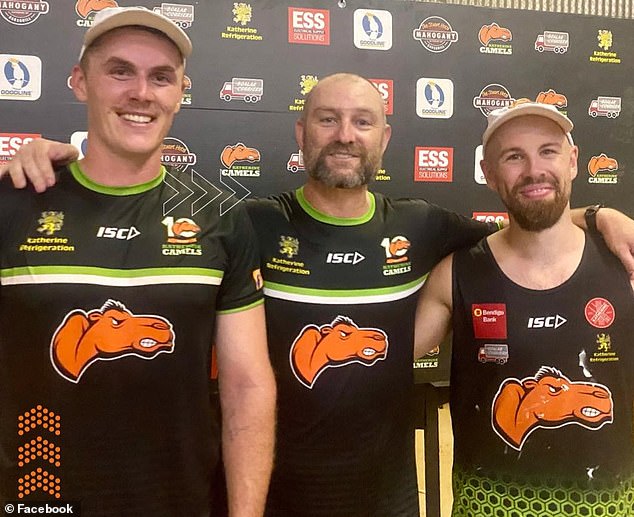 Tyrell said the agitators were all spectators and praised the opposition team for trying to stop the violence.

‘The Ngukurr boys were trying to stop it,’ he said.

‘There were kids stuck in the middle of what was going on in the end.

‘Projectiles were being thrown. Heaps of bottles, bottles of water. They were all full.

‘They got chairs from the bench. We’re talking eight-year-old kids up to 50-year-old men.’

AFLNT is investigating the incident.

‘The AFLNT will follow due process in investigating the incident and will take all relevant actions relating to those involved as part of this process,’ it said in a statement.