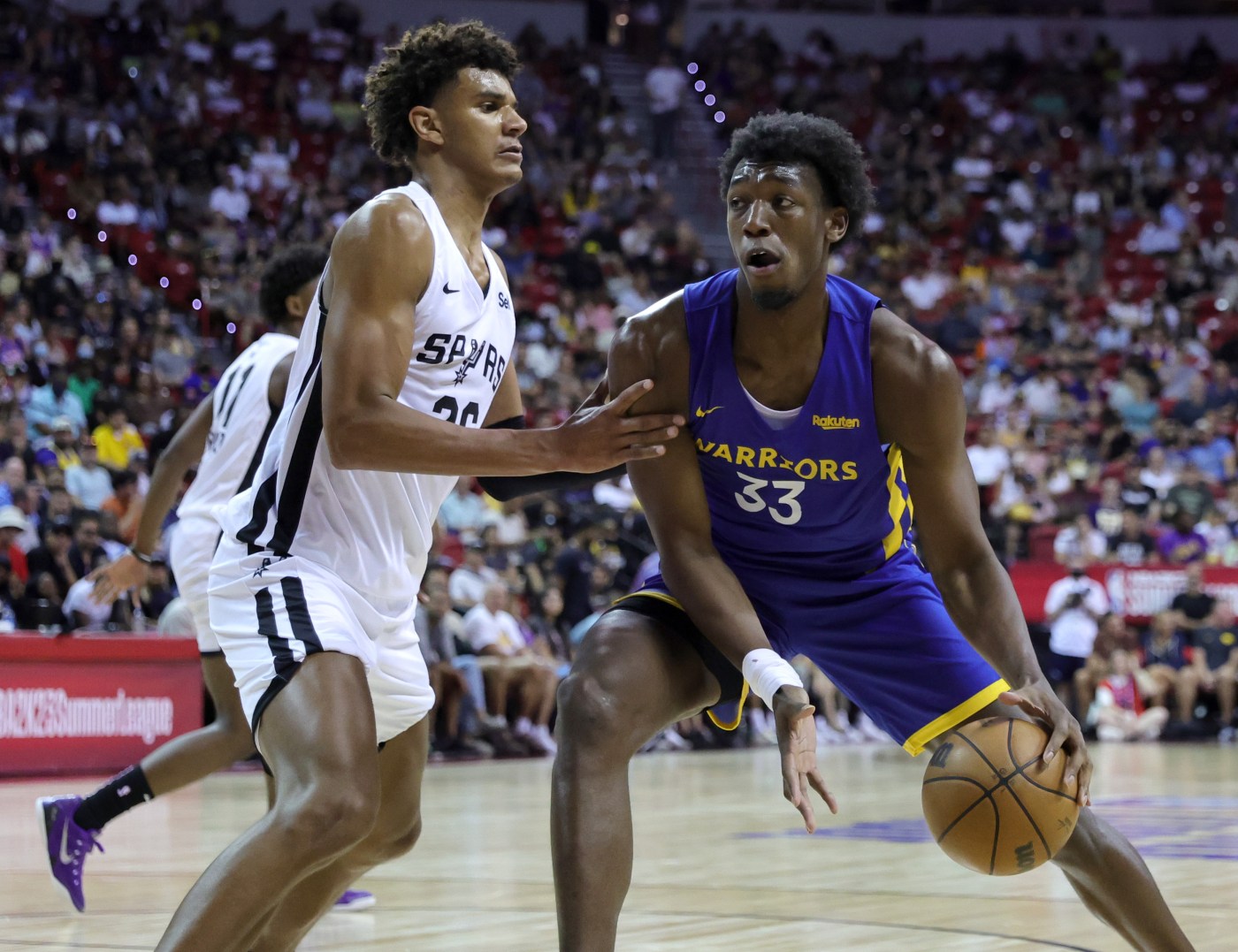 After going nonstop since the start of training camp in September, most of the Warriors dispersed to enjoy their summer vacations after the championship parade last month.

But now, with Summer League coming to an end, the Warriors coaching staff and young players will get their much-deserved break, too.

Summer League is a time for recently drafted or fringe players to impress NBA front offices. Some are proving why they’re ready for an NBA opportunity while others use this as a transitional stepping stone from the college level to professional or as a time to polish their skills.

This summer’s Warriors team was one of the most exciting to follow in recent memory. Not because they did well by any means – they finished XX-XX – but rather because of this group gave a glimpse into the future as four reigning NBA champions who took the floor together for the first time ever.

With that in mind, here are three takeaways from the Warriors’ Summer League run:

James Wiseman dipped his toes back into live action in Summer League and came out with no known issues. That’s important.

Though Wiseman had an up-and-down showing for the Warriors, the last two weeks have given the 21-year-old a starting point for the upcoming season.

Though Wiseman was on a minutes restriction, he logged XX Summer League minutes across XX games, the most he’s played in more than 15 months after he experienced several setbacks in his recovery from a torn meniscus in his right knee.

Wiseman opened his Summer League with a ferocious two-hand dunk with an assist from Jonathan Kuminga. He averaged XX points while shooting XX% from the field and recorded XX steals.

The Warriors drafted Wiseman for his 7-foot stature and athleticism, both on display over the last two weeks. He blocked a total of XX shots and snatched XX rebounds.

Wiseman knows he needs to be a better rebounder – he even told coach Jama Mahlalela that after his first game back July 10. But Mahlalela was certain that Wiseman’s rebounding ability will improve with more reps.

After months of setbacks, Wiseman’s Summer League appearances were promising for the upcoming season.

Developing the (hopeful) next Big Three will take time

Winning an NBA title this year took some of the urgency off the Warriors’ young players to develop into the franchise’s next superstar trio. Still, Wiseman, Moses Moody and Jonathan Kuminga appear ready for expanded roles next season in the second unit.

Put Jordan Poole into that group, and Mahlalela believes the Warriors have a “pretty lethal lineup.”

Wiseman, Moody and Kuminga finally played together in a game after a year’s wait. The Warriors will practice patience as they learn the nuances of each other’s games and build chemistry.

Still, seeing those three on the floor together was exciting for the Warriors and their fanbase.

Each brings a unique skill set to the table that compliments the others.

”They’re definitely not replicas of each other and that’s what’s going to make them special,” Mahlalela said, “JK can do things that Moses can’t and vice versa. And Wiseman is obviously the X-factor with his size and length and (place as a) running, skilled big. As we figure those guys out and add Jordan into the mix in the summer workouts and into the preseason, I think it will be unique to see what the second unit could potentially look like and put a young unit out there and it could be pretty good.”

The Warriors have long talked about having a dual-timeline roster, where they’re contending for titles while also expanding their championship window by developing the next generation of foundational players. As the team’s leaders get another year older, this season could be pivotal in the development of the younger players.

Keep an eye on these three

Weatherspoon is an NBA champion, watching his team take this year’s title while riding the bench due to two-way contract restrictions.

Golden State offered Weatherspoon a two-way qualifying offer, but Weatherspoon has yet to sign, betting on himself to make a convincing case for a guaranteed deal.

Was his solid defense and XXSTATSXX at Summer League enough? That’s yet to be seen.

Mac McClung – McClung switched teams for a better opportunity ahead of the Las Vegas portion of the summer basketball showcase after starting California Classic games off the bench for the Lakers.

The Warriors’ main reason for nabbing McClung was to replace their injured second-round pick, Ryan Rollins. But McClung impressed in his Warriors debut as starting point guard, a position he recognizes he has room to grow in.

The 22-year-old was the second-leading scorer in his first two games in a Golden State uniform. Mahlalela used the word “exciting” to describe the 6-footer. He had some lapses on defense and needs to improve his shot, but he showed encouraging abilities to attack the rim and see the floor.

While it seems unlikely McClung sticks on the Warriors’ roster since they’ll want to see what they have in Rollins, McClung showed he has NBA potential and could land himself a G League spot in Santa Cruz or with another NBA team.

Gui Santos – The Warriors drafted Santos out of Brazil, where he played professionally, under the recommendation of former development coach and player Leandro Barbosa, who played with Santos for Minas Storm from 2018 to 2020.

Santos went into summer play acknowledging the challenges of transitioning to the Americans’ up-tempo and more physical style of play which is different than what he’s used to in international play.

But the 20-year-old has an aptitude for scoring and playmaking, which was on display at various points throughout the summer. He had some admirable performances, including his debut in the California Classic, when he scored a team-leading 23 points and added six rebounds.

Santos, who is 6-foot-8, has point forward potential, but his shooting and defense still need to be developed to an NBA level. It’s possible that the Warriors stash Santos, who could return to Brazil. He could also sign a deal with the Santa Cruz Warriors and continue to develop his game in a system that mirrors the big league team.