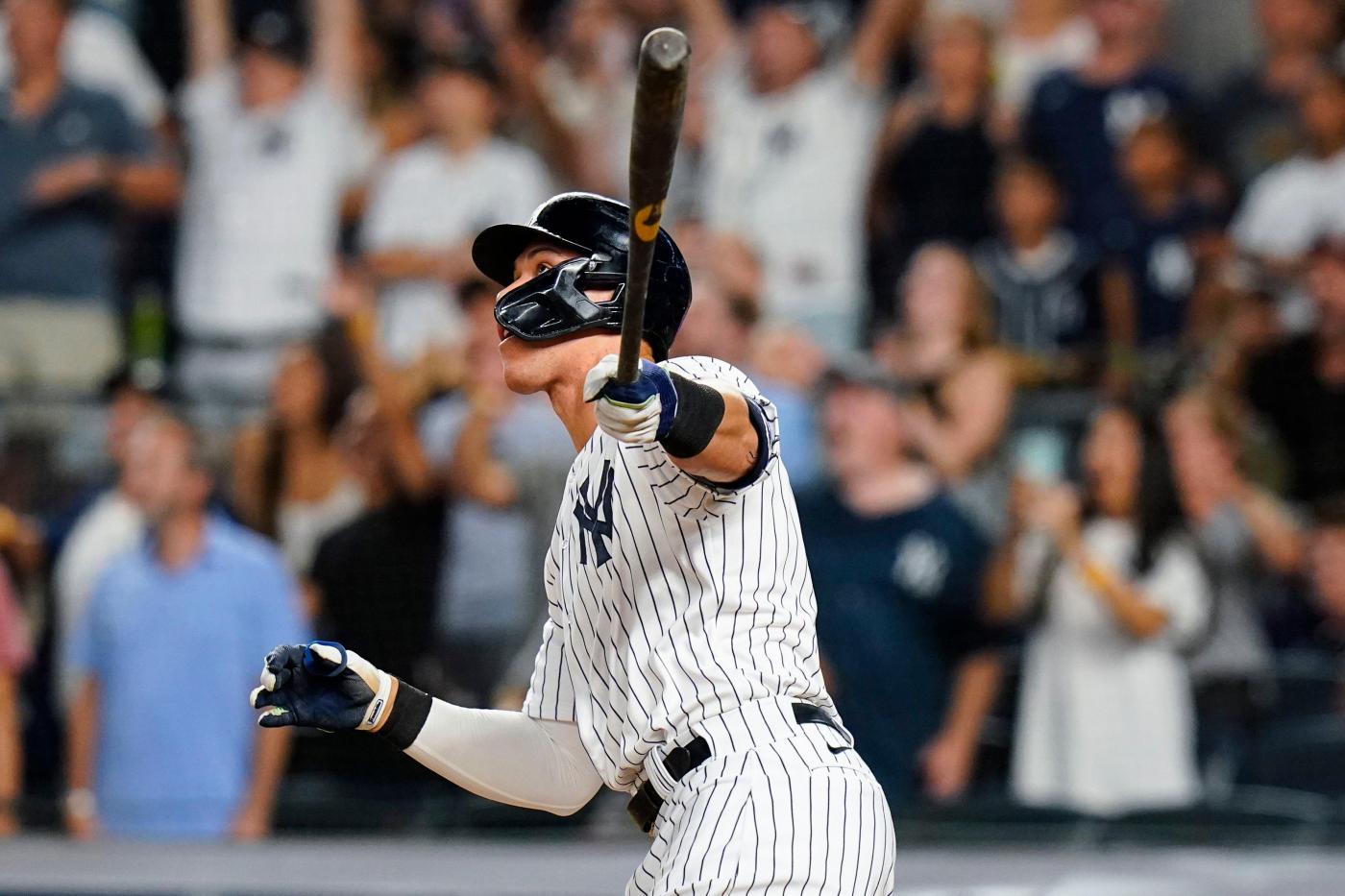 The 39th was a majestic, high arching shot that soared into left center field. Aaron Judge’s major league leading 39th home run of the season was more than pretty, it was critical. That home run was the only run scored all night at Yankee Stadium as the Yankees walked off a 1-0 win over the Royals at the Stadium.

It was only the Bombers’ second hit of the night.

It was Judge’s third walk-off of the season and the Yankees 12th walk-off win of the year.

Andrew Benintendi, who learned that he was switching sides after traveling to New York from Kansas City with the Royals and spent Wednesday night hanging out with his now former teammates, went 0-for-4 with a strikeout in his first game in pinstripes.

Right-hander Brady Singer baffled the Yankees for seven innings Thursday night. He allowed just one hit and walked one. He struck out 10, including Judge twice.

Gleyber Torres’ single in the fourth inning was the Yankees’ only hit through the first eight innings of the night.

Jameson Taillon kept the Yankees in it.

After struggling for the last month and posting a season-low 2.2 innings in his last outing, Taillon went six innings holding the Royals scoreless. He walked two and struck out eight.

The Yankees need pitching. Over the last month, the pitching staff that had been atop the league has dropped off noticeably. Over the last 30 days, the Yankees staff has posted a 3.81 ERA, 14th in the majors. Opponents are hitting .234 off them, 10th best in the big leagues.

Taillon had been one of their biggest concerns.

In his previous six starts, Taillon had raised a red flag. He’d allowed 23 earned runs in 29.2 innings pitched. The right-hander had an alarming .890 OPS against in that span.

After making the deal to acquire Benintendi, the Yankees still need to make a a major move to improve their pitching staff if they are going to compete for a World Series.

Wednesday night, the Yankees had a scout in Cincinnati watching their top target, Luis Castillo. The 29-year old who is a free agent after this season is the top target for the Yankees and every other contender looking for pitching. He will come with a heavy prospect price tag, as he should for his 1.071 WHIP and 90 strikeouts over 85 innings pitched.

The Yankees had another scout heading to Chicago this weekend with the intention to watch the A’s Frankie Montas. The right-hander, also 29, is also drawing heavy interest with a 1.127 WHIP and 109 strikeouts over 104.2 innings pitched.

The Yankees are hoping they can add a top arm before Tuesday’s MLB trade deadline. They are also hoping they will get help internally.

Luis Severino, who last pitched July 13, is on his last day of a prescribed rest for his strained lat muscle. The right-hander, who pitched just 27.2 innings over the last three years because of injuries, was brilliant before being sidelined with the injury. He’s 5-3 with a 3.45 ERA over 86 innings pitched this season.

The Yankees don’t just need starting pitching, their bullpen could use a boost, too. With Michael King lost for the season after fracturing his elbow on a pitch over the weekend and Miguel Castro expected to be out a few more weeks, the Yankees are strapped. Aroldis Chapman has not been consistently good since last year and Jonathan Loaisiga may be just turning the corner.

They have gotten some solid pitching from young, home-grown pitchers like Ron Marinaccio, who threw two scoreless innings Thursday night. He struck out three.