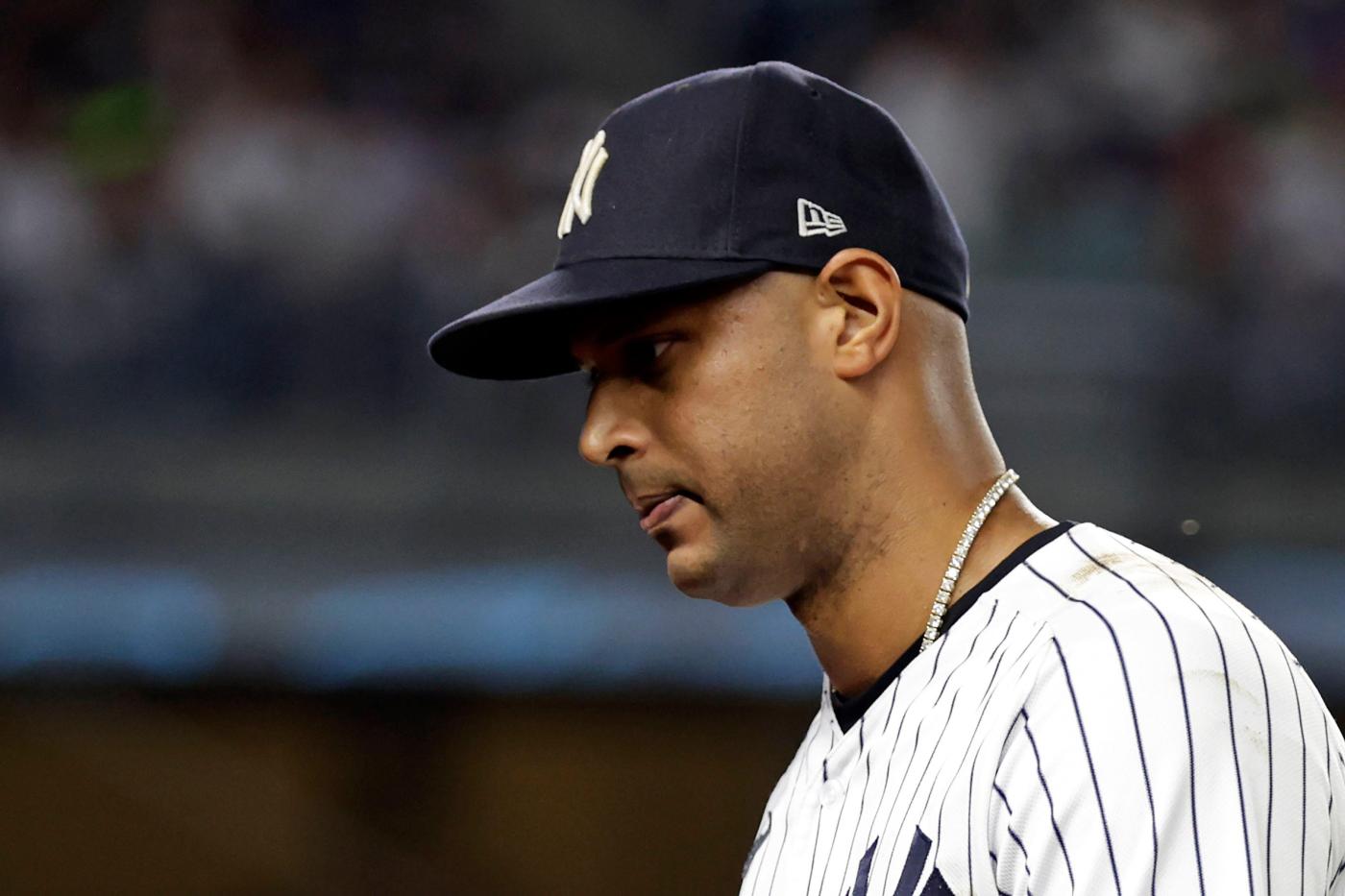 From a comfortable 15.5 game lead to just two games up in the loss column, the 2022 Yankees may be nearing the finish line of a historic collapse.

The Rays marched into the Bronx on Derek Jeter night and watched the bruised and battered Yankees struggle in their 4-2 loss. The Bombers, who are filled with minor leaguers up and down the lineup, were unable to create or capitalize in any offensive situations.

However, the defensive blunders by left fielder Aaron Hicks were glaring. In the top of the fourth inning, Frankie Montas pitched himself into a first and second with two outs situation. Wander Franco stepped up a lofted a fly ball down the left field line that was dropped by Hicks. Hicks did not realize that the ball was in fair territory and paused for a few moments which allowed two runners to score making it a 3-0 game.

The very next batter, Randy Arozarena ripped one into left field and it appeared that Hicks misplayed it allowing it to go to the wall scoring another run.

The displeased–to say the least–Bronx crowd had seen enough as did manager Aaron Boone. In the top of the fifth inning, Estevan Florial was patrolling left field. Boone pulled Hicks, a rare in-game statement by the Yankee manager.

“I just felt like I needed to get him out of there at that point,” said Boone. “I felt like I needed to do that in that moment in time. There’s a level of feeling for him there. He was pretty frustrated and upset. There wasn’t a lot of conversation about it yet.” Boone added that he felt the crowd reaction played a factor in pulling Hicks.

Regardless of defensive blunders, the Bombers did have some opportunities to get into the game and came up empty. Giancarlo Stanton pinch hit for Oswaldo Cabrera in the bottom of the sixth with two runners on and grounded out to third. After Aaron Judge singled in Oswald Peraza in the seventh, Gleyber Torres grounded out to end the inning.

Kyle Higashioka added a solo shot in the ninth and suddenly gave the Bombers a heartbeat. Judge drew a walk to set up Torres as the tying run with two outs. The second basemen flew out to the wall in right-center ending the game at 4-2.

The box score doesn’t indicate the performance of Montas on Friday night. The right-hander was charged for four runs after being pulled with two outs in the sixth inning. The Hicks blunder was not registered as an error, therefore, inflating his line a bit. Montas kept the Yanks in the game and gave them a chance to win. The Bombers just didn’t give themselves a chance.

Lucas Leutge and Ryan Weber finished off the game out of the bullpen for the Yankees. Both pitchers combined for three and a third of scoreless baseball, limiting the damage and giving their offense every opportunity to get back into the game.

With just a two-game lead in the loss column, what seemed to be unthinkable a little over a month ago could happen once the weekend is over. The American League East is very much up for grabs.