Yankees fall in series finale against Royals – The Mercury News 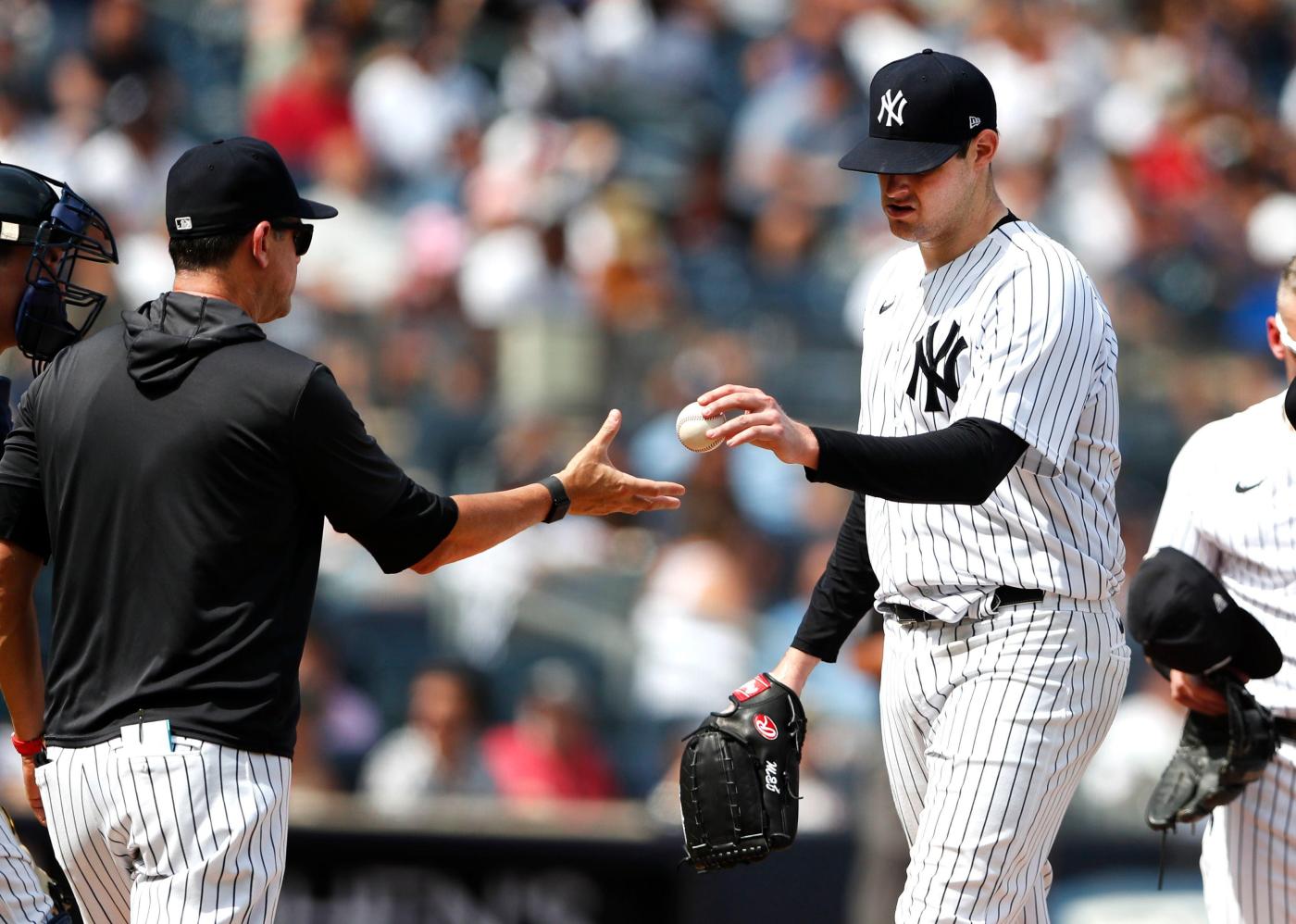 Just over 48 hours before the Tuesday MLB trade deadline, the Yankees got a reminder that despite their best-in-the league record and having all but clinched the American League East, they can get better.

Royals catcher Salvador Perez went down and got a sinker to hit the first home run of the season off closer Clay Holmes for a come-from-behind 8-6 upset of the Yankees at the Stadium.

It was the first loss in four games for the Yankees (69-34) and their first loss to the Royals (40-62) this season, going 6-1 overall. DJ LeMahieu homered for the second straight game, his first time homering in back-to-back games since 2020. Anthony Rizzo hit his 25th of the season, giving him seven seasons where he hit at least 25 in his career. It was the first time since 2019 he’s hit 25.

Despite the loss Bombers still have the most wins in baseball and an 11.5-game lead in the division. They are percentage points behind the Dodgers for the best record in the majors. This week, however, being swept by the Mets and this loss to the Royals there were some flashing warning lights. The Yankees could use some pitching help in their bullpen and rotation. They are without Luis Severino, who will only begin playing catch on flat ground on Monday after a stint on the injured list. The Yankees lost Michael King and Chad Green for the season and Zack Britton is still working his way back from Tommy John surgery.

“I’m encouraged by a lot of things I’m seeing,” Yankees manager Aaron Boone said. “Obviously today, it was a tough day for us. Clay Holmes has been one of the best closers in the sport. Today notwithstanding, we feel great about him. I feel like [Jonathan] Loaisiga continues to make progress, [Aroldis Chapman] is making progress. We’ve seen the likes of [Ron] Marinaccio and, and Clarke Schmidt really take big steps and be real contributors to the bullpen. Wandy [Peralta] is reliable and we’ve seen Albert Abreu go to another level.

“So I think we’re seeing a lot of good things down there. We’ve just got to keep refining, keep getting better and put ourselves in a good position moving forward.”

But for a team that has talked about a World Series Championship-or bust mentality since before spring training opened, that may not be enough.

The Yankees have been actively scouting pitching the last few weeks.

After the Reds dealt Luis Castillo to the Mariners, the Bombers have been on Frankie Montas and Paul Blackburn of the A’s. Among the relievers that are on the market, the Bombers have (good and bad) history with David Robertson and have shown interest in Michael Fulmer in the past.

It was at this time last year that they brought in Holmes, an under-the-radar reliever who they turned into as dominant a reliever as there is out there.

Holmes has been so good, but it’s his first year closing. He has blown three of his last nine saves opportunities. And Sunday it wasn’t just the home runs. He issued a one-out walk and then hit Bobby Witt, Jr. He had two strikes on Perez when he left the sinker too much over the plate.

“You don’t see many righties do that against him, if ever,” Yankees manager Aaron Boone said. “So he probably didn’t quite have the bite on the sink that he normally does but Salvy’s a really good power hitter, and he caught him.

“It’s just one of those things you’re not going to see very often.”

It’s just the fifth time this season he’s allowed a run and the second time he has allowed multiple runs.

He wasn’t the only pitcher that struggled.

Jordan Montgomery went four innings, allowing four earned runs on four hits. He walked two and struck out six. Over his last two starts, Montgomery has allowed nine runs in 6.1 innings pitched. Marinaccio, who had not given up a hit since June 7, gave up his first run since April 28 when Hunter Dozier led off the eighth with a home run off the right-handed reliever. That snapped a streak of 19 scoreless innings and 56 straight batters without giving up a hit.

“Obviously we had a couple of big losses there with King and Green earlier in the year. We definitely have a lot of talent down there and guys that are capable,” Holmes said. “Obviously we’ll see what happens. That’s obviously out of my control. I have full confidence that the staff and management, they’ll do the best they can to put the best team [on the field] and give us the best chances,” Holmes said. “We just look forward to go out and competing, whatever it looks like or whoever it is.”