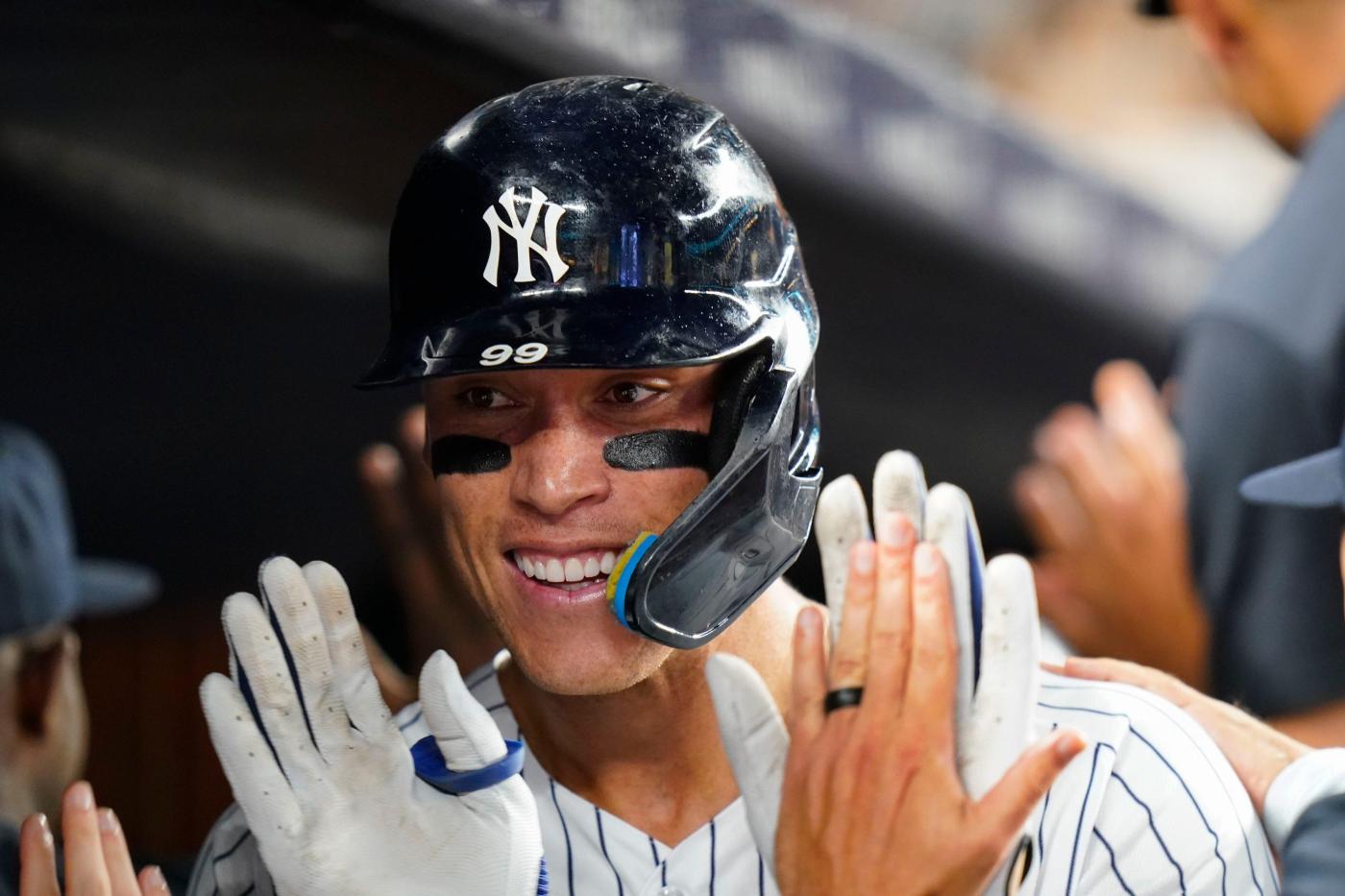 Aaron Judge is making them pay. He is costing the pitchers that miss their spots against him. He’s robbing opposing hitters of home runs and eventually he will make the Yankees or another team pay a steep price in the free agent market this winter, after betting on himself. Judge hit two home runs Friday night, including his second grand slam of the season, driving in six runs and powering the Bombers to an 11-5 come-from-behind win over the Royals at the Stadium.

It was the 29th come-from-behind win of the season for the Yankees (68-33), who maintained the best record in the American League.

“He’s amazing,” Yankees manager Aaron Boone said before anyone even asked a question after Friday night’s performance. “He’s just done some really special things obviously. Forty-one (home runs),  a grand slam for the cherry on top and just more great at bats. He makes a great play to start the game and take a home run back, too. Maybe we should give him three tonight…for that  robbery right out of the gate.

Judge’s second homer of the night, a 370-foot shot, capped an eight-run, eighth-inning rally, and was his 41st of the season, his second grand slam of the year and fourth of his career.

The 30-year old Judge hit his major-league leading 40th home run in the third inning off Royals lefty Kris Bubic. Number 41, the grand slam, capped the Yankees’ impressive eighth inning. No other hitter has reached 33 so far. He is only the second Yankee ever to hit 41 homers in the clubs’ first 101 games, joining Babe Ruth. He’s the seventh major leaguer to do it.

He has hit five homers in his last five games, eight in his last eight and 11 in his last 13 games. He is now on pace to hit 64 home runs this season. The franchise record is 61 set in 1961 by Roger Maris and it still stands as the American League record.

Of the 38 runs the Yankees have scored over their last eight games, Judge has driven in 19 of them.

Judge also robbed a home run on Friday night. MJ Melendez led off the game with a deep fly ball, 357 feet to the right-field wall. Judge leapt up and caught it on the very edge of his glove, “snow coning,” it to save a run for Gerrit Cole.

“So I was pretty, pretty thankful that he made that play and he was able to come out of it clean,” Cole said, pointing out that Judge had to maneuver around the new electronic scoreboard in the right field wall and was cut by the chain link fence protecting it. ”So that was just a jolt of energy right from the beginning. Great play.”

Judge said it was a tough angle with the lip over the electronic scoreboard in the right-field wall, but making the play was a shot of adrenaline for him—similar to hitting homers.

They’re close,” Judge said of making the defensive play. “You get the crowd excited, you’re helping a pitcher who’s working his butt off. It’s pretty cool and then kind of the same thing when you hit one you’re helping your team  add some runs to the board, but hitting the home run is still above robbing it for me right now.

“But it’s still fun getting a chance to do that.”

It’s been a dominant season for Judge, who came into it playing for a contract when he hits the free agent market at the end of the year. He turned down an extension offer on Opening Day that would have included this season and been worth $230 million.

Judge isn’t talking records or contracts during this season and when asked about his historic run, he just shrugged.

“The team’s doing great,” Judge said with a coy smile, “We’re in first place. I think that’s the most important thing.”