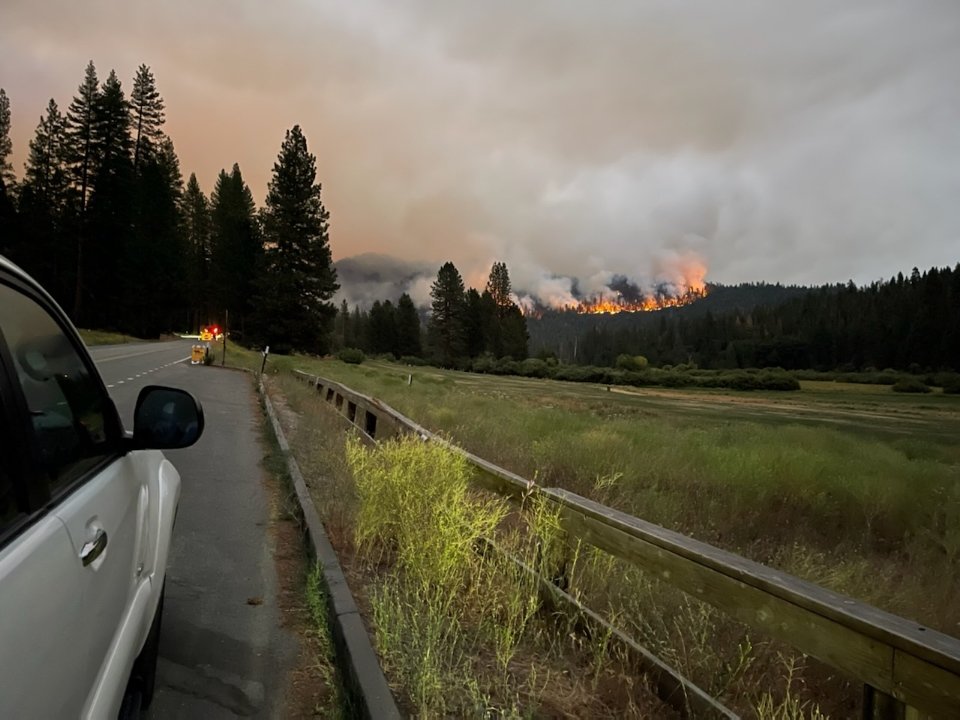 YOSEMITE NATIONAL PARK — A fire burning in Yosemite National Park’s southern edges, around the famed Mariposa Grove of giant sequoias and within 1 mile of the historic Wawona Hotel, increased nearly 50% from Sunday to Monday to 2,340 acres, sending smoke across the park and disrupting vacation plans for thousands of visitors.

Crews battling the Washburn Fire, which began last Thursday, had some good news to report Monday morning. No structures had burned. There were no reports of injuries. And for now, firefighters have been able to keep the fire from destroying any of the 500 or so giant sequoias in the area that tower more than 200 feet tall, and which were first protected by Abraham Lincoln in 1864.

“They are starting to make a little bit of progress,” said Marc Peebles, a spokesman for the agencies fighting the fire. “The priority is firefighter safety and public safety, the structures in Wawona and the treasured Mariposa Grove. They are working very hard in those areas.”

Still, the fire could burn for weeks, Peebles said.

Matt Ahearn, deputy operations chief on the fire, said that hand lines that fire crews had cut — areas where they removed vegetation down to the bare soil — were holding along the edge of Mariposa Grove.

“Along Mariposa Grove Road, the fire perimeter is holding very well,” Ahearn said. “We are starting to show some containment.”

Inside the giant sequoia grove, fire crews set up sprinkler systems to protect the ancient trees. They wrapped a historic cabin that was once home to the park’s first ranger, Galen Clark, in the late 1850s, in fire resistant-foil.

By mid-day Monday, 545 firefighters at 10 helicopters were battling the blaze, which was first reported last Thursday near the trailhead at Mariposa Grove. Its cause remains unknown.

For the first time Monday, there was some containment, Peebles said, although the percentage hadn’t yet been calculated.

The southern entrance to Yosemite along Highway 41 remained closed Monday, and the community of Wawona remained evacuated. The rest of Yosemite was open, including Yosemite Valley and the High Country, and all of the park’s campgrounds and hotels outside the Wawona area.

But the fire and its smoke — which varied hour-by-hour in Yosemite Valley depending on shifting winds and weather conditions — played havoc with the vacation plans of thousands of people who were visiting, or planning to visit during the park’s busiest tourist season.

News of the smoky air in Yosemite forced many would-be visitors to the park to change their plans.

“We were getting calls all day long yesterday — people wanting to cancel,” said Kaitlyn Thomas, front desk manager at the Best Western motel in the town of Mariposa. a popular jumping-off point for Yosemite, about 45 miles’ drive from the park entrance at El Portal.

Most of those canceling cited health issues, Thomas said.

“They didn’t want to come up here and be affected by the smoke,” she said.

But the Best Western remained fully booked Monday, with the motel’s general manager Cherissa Wheeler explaining that some visitors had switched their plans and decided to stay in Mariposa instead of Oakhurst near the now-closed south entrance to the park. Firefighters have also helped to keep the motel full, Wheeler said.

“We have a lot of the helicopter crews,” Wheeler said.

Part of the difficulty in fighting the fire was the condition of the forests. Although park officials have conducted controlled burns in Mariposa Grove for more than 50 years to reduce the build up of dead wood and brush that could fuel high-intensity fires, hundreds of thousands of acres of other forests around the grove, filled with Ponderosa pines, firs and other trees, were at risk.

Some of the areas have not burned for generations. And others, both in the park and in national forests across the Sierra Nevada, have been severely weakened by drought, with California experiencing serious drought conditions in eight of the past 11 years, made worse by hotter temperatures from the warming climate.

“We had some rain that happened in April but other than that, the winter was bone dry,” said Andy Bollenbacher, a National Weather Service meteorologist in Hanford.

“It’s a dramatically, dramatically different year,” he added. “The drought is just dreadful up there, its’ awful.”