Britain and the world have been thrust into mourning as Queen Elizabeth, the UK’s longest-reigning monarch and the nation’s figurehead for seven decades, has died aged 96 .

Her Majesty died peacefully at her home in Balmoral surrounded by her family, including her son Charles and grandson William, Buckingham Palace said on Thursday.

The Queen‘s death will see Britain and her Commonwealth realms enter into a ten-day period of mourning as millions of her subjects in the UK and abroad come to terms with her passing.

Here, we reveal the tributes from world leaders following the death of her Her Majesty…

‘It is with deep sadness that we learned of the death of Her Majesty Queen Elizabeth II. On behalf of the UA people, we extend sincere condolences to the @RoyalFamily, the entire United Kingdom and the Commonwealth over this irreparable loss. Our thoughts and prayers are with you.’ 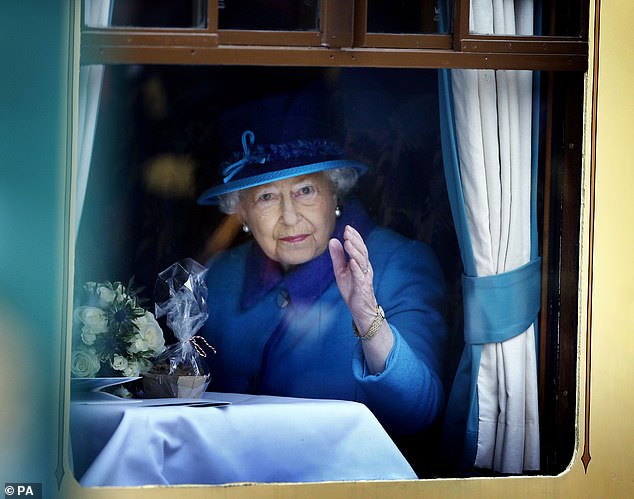 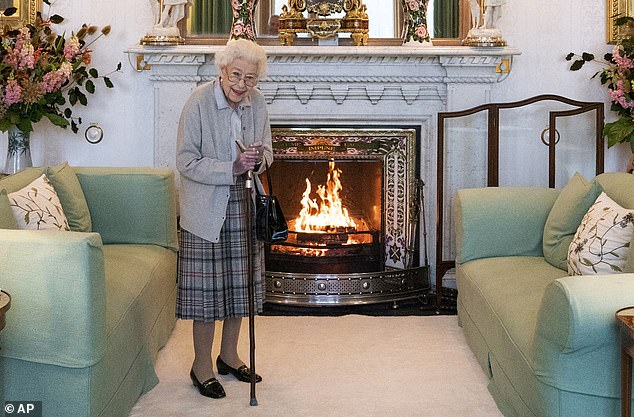 The Queen poses for a photograph in the drawing room at Balmoral just two days ago, shortly before her meeting with Ms Truss, whom she appointed as her Prime Minister on Tuesday

US PRESIDENT JOE BIDEN AND HIS WIFE JILL

‘Queen Elizabeth II was a stateswoman of unmatched dignity and constancy who helped make our relationship special’.

In a message to Charles, Britain’s new king, Putin said the Queen ‘rightfully enjoyed the love and respect of her subjects, as well as authority on the world stage’.

He added: ‘I wish you courage and resilience in the face of this difficult, irreparable loss. May I ask you to pass on sincere condolences and support to members of the royal family and the entire people of Great Britain.’

‘It was with the heaviest of hearts that we learned of the passing of Canada’s longest-reigning Sovereign, Her Majesty Queen Elizabeth II. She was a constant presence in our lives and her service to Canadians will forever remain an important part of our country’s history.’

‘Her Majesty Queen Elizabeth II embodied the British nation’s continuity and unity for over 70 years. I remember her as a friend of France, a kind-hearted queen who has left a lasting impression on her country and her century.’ 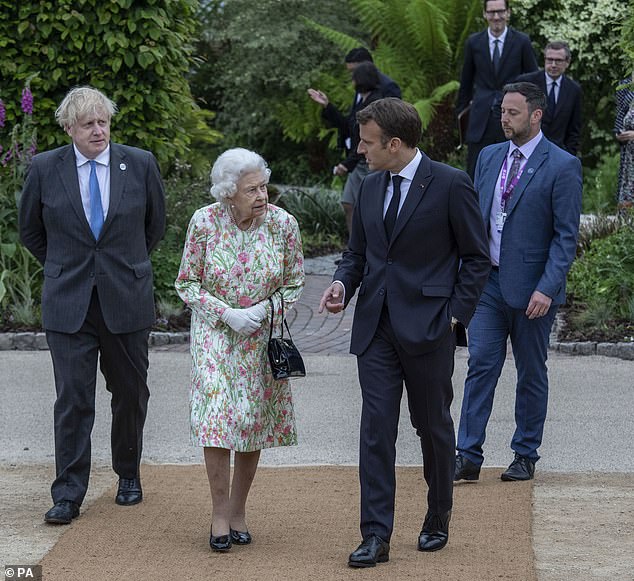 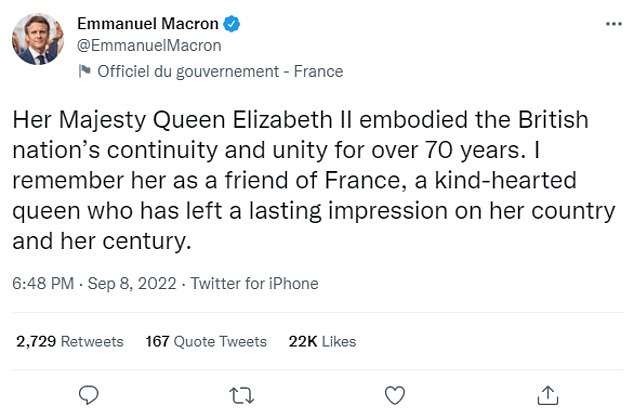 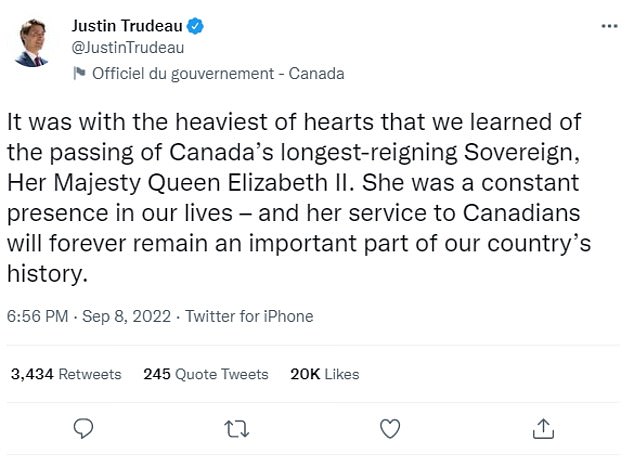 Pope Francis said on Thursday he was deeply saddened by the death of Queen Elizabeth II and offer his condolences to her family and her successor, King Charles.

‘I willingly join all who mourn her loss in praying for the late Queen’s eternal rest, and in paying tribute to her life of unstinting service to the good of the Nation and the Commonwealth.’

‘As the United Kingdom’s longest-lived and longest-reigning Head of State, Queen Elizabeth II was widely admired for her grace, dignity, and dedication around the world. She was a reassuring presence throughout decades of sweeping change, including the decolonization of Africa and Asia and the evolution of the Commonwealth.

‘Queen Elizabeth II was a good friend of the United Nations, and visited our New York Headquarters twice, more than fifty years apart. She was deeply committed to many charitable and environmental causes and spoke movingly to delegates at the COP26 climate talks in Glasgow.

‘I would like to pay tribute to Queen Elizabeth II for her unwavering, lifelong dedication to serving her people. The world will long remember her devotion and leadership.’

‘Her Majesty Queen Elizabeth II will be remembered as a stalwart of our times. She provided inspiring leadership to her nation and people. She personified dignity and decency in public life. Pained by her demise. My thoughts are with her family and people of UK in this sad hour.’ 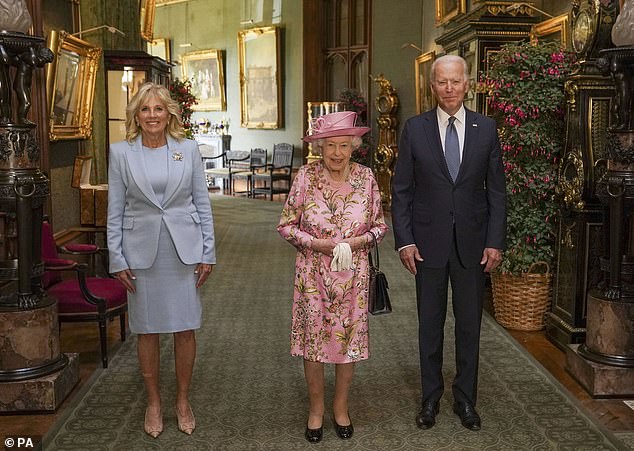 Queen Elizabeth II pictured with US President Joe Biden and his wife Jill in the Grand Corridor during their visit to Windsor Castle on June 13, 2021

‘For 70 long years, from the aftermath of World War II well into the 21st century, across 15 different Prime Ministers, through great triumphs and great challenges, the Queen’s steady leadership safeguarded the land she loved. Despite spending nearly three quarters of a century as one of the most famous and admired individuals on the planet, the Queen made sure her reign was never really about herself, not her fame, not her feelings, not her personal wants or needs. She guided venerable institutions through modern times using timeless virtues like duty, dignity, and sacrifice. She offered our contemporary world a living master class it needed badly.’

‘Our thoughts are with the royal family and all those who mourn Queen Elizabeth II in the UK and worldwide. Once called Elizabeth the Steadfast, she never failed to show us the importance of lasting values in a modern world with her service and commitment.

‘Queen Elizabeth Il’s remarkable reign oversaw key events of the 20th & 21st century. The EU pays tribute to her unique contribution to building peace & reconciliation. While her loss will be felt around the world, our immediate thoughts are with her family & the people of the UK.’ 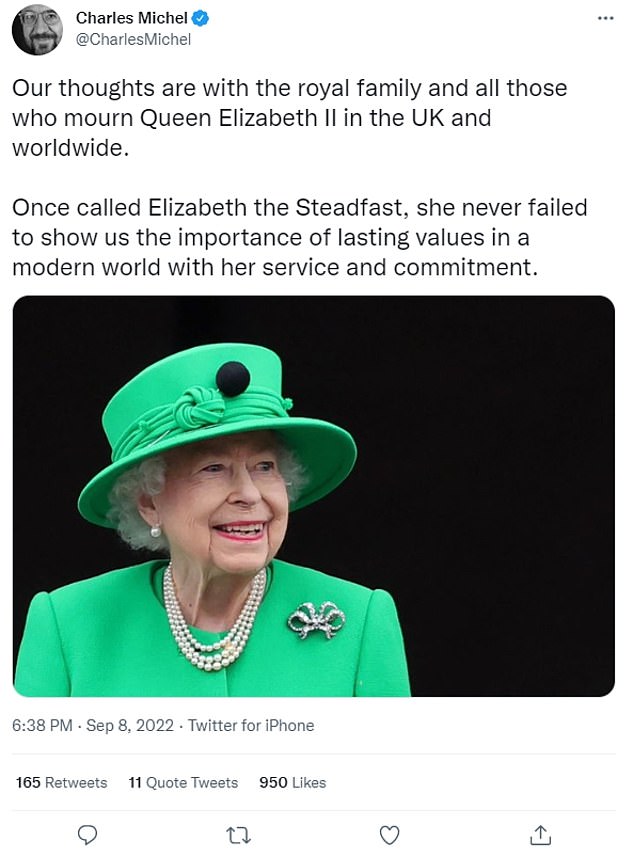 ‘We remember Queen Elizabeth II with deep respect and great affection. Steadfast and wise, she dedicated her long life to serving the British people. We feel a strong bond with the United Kingdom and its royal family, and we share their sorrow at this time.’

THE ROYAL HOUSE OF NORWAY

‘The Royal Family is deeply saddened to receive the news that Her Majesty Queen Elizabeth II has passed away.’

‘Queen Elizabeth II is a woman who shaped the century. She witnessed and written the contemporary history.’

‘She was a source of strength and confidence to her country for almost 100 years. Germany will remain eternally grateful to her for reaching out to us for reconciliation after the terror of World War II.’ 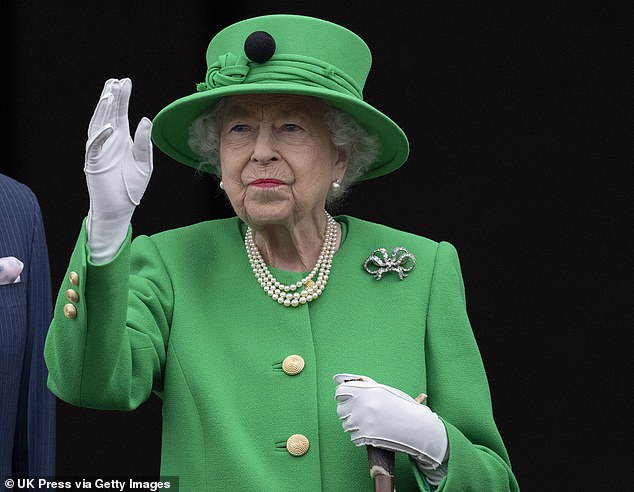 ‘Queen Elizabeth was a major player in world history over the last seventy years. She represented the United Kingdom and the Commonwealth with balance, wisdom, respect for institutions and democracy. She has been the most beloved symbol of her country and has garnered respect, affection and warm feelings everywhere. She ensured stability in times of crisis and kept the value of tradition alive in a society in constant and profound evolution.

‘Her spirit of service, her dedication to the United Kingdom and the Commonwealth, the profound dignity with which she has held office for such a long time have been an unceasing source of admiration for generations.’

‘I am deeply saddened by the death of Her Majesty the Queen, Elizabeth II. Sending heartfelt and sincere condolences to the Royal family and the British people and the people of the Commonwealth.’

‘My deepest condolences to the Royal Family and all the British people on passing of Her Majesty The Queen. For decades she has been an embodiment of everything that makes Britain truly Great. She will be missed and remembered in Poland and all over the world.’ 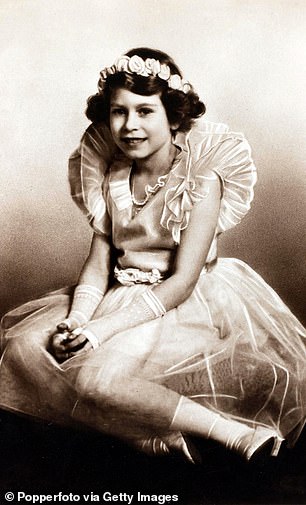 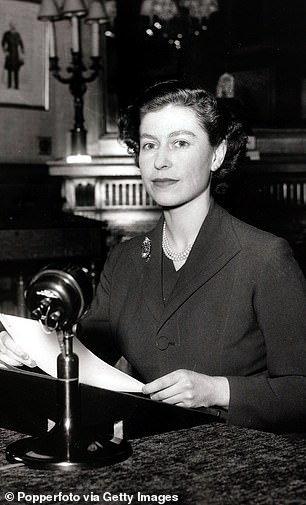 The then Princess Elizabeth is seen above left posing in a ballet outfit in 1932, and right making her first Christmas broadcast in 1952. She reigned over the United Kingdom and Commonwealth for 70 years

‘We join the world in mourning the passing of Her Majesty Queen Elizabeth, a global icon who represented the finest qualities of her nation and people. Her incredible lifetime of service and duty to the United Kingdom is unparalleled in our modern world.’

‘The People of Gibraltar will mourn Her Majesty as a monarch who has reigned wisely and with incomparable dedication throughout the period of our post-war emergence as a part of the British family of nations.’

‘The People of Gibraltar and the Government proclaim their loyalty to the Crown of the United Kingdom of Great Britain and Northern Ireland and to His Majesty The King.’

‘For all of us, the Queen has been a constant presence in our lives â€’ as familiar as a member of the family, yet one who has exercised a calm and steadying influence over our country. Most of us have never known a time when she was not there. Her death is not only a tragedy for the Royal family, but a terrible loss for us all.’

‘We have all lost someone very precious to us and, as we mourn, we should be grateful that we were blessed with such an example of duty and leadership for so very many years.’